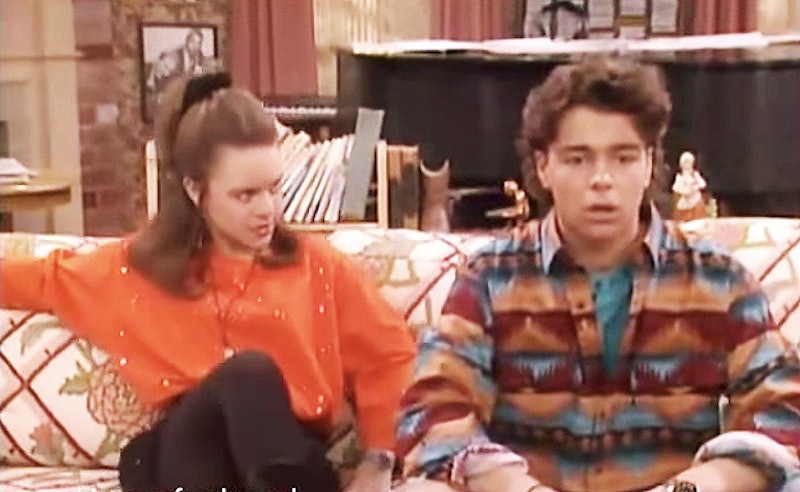 Few catchphrases are as memorable as Joey Lawrence's "Whoa" from the '90s classic, Blossom. If you're too young to remember the iconic phrase, imagine the "Whoa" being said in a similar tone to Shaggy's from Scooby-Doo; it's kind of like "Zoinks," but in more of a jock-like tone. So, naturally, in a conversation with Bustle, Lawrence says he's still getting his catchphrase repeated to him even 22 years later. All over the world. From everyone. Including a pastor at church on Easter. No, seriously.

“I was in church and the pastor said it. It was really crazy," Lawrence says to Bustle Associate TV Editor Sage Young. "At the end, it was an Easter service, this was maybe six or seven years ago. Coming out of Easter Sunday service and we were walking up, you know they would greet everybody on the way out. And I was like, ‘Amazing service today, Pastor,’ and he was like, ‘Oh, thank you.’ And he leaned in, and he went ‘Whoa,’ like that. Unbelievable."

Church on Easter Sunday may be the weirdest "whoa" Lawrence has ever received, but it's not nearly the only place he's gotten it. He describes to Bustle a time in Monte Carlo when he was at a Film and TV festival for Melissa and Joey. Apparently, there were hundreds of people outside his hotel from all over Southern France (even its remote islands) to see him — and they were repeating his catchphrase, too. "It’s all over the place," he says. "When I go to England. When I go to Germany..."

It must be weird to have something you said on TV over 20 years ago being repeated to you everywhere you go no matter how long it's been, and Lawrence seems appropriately awed: "It is unbelievable. Truly unbelievable."

Originally, the line wasn't expected to be a big hit. "['Whoa'] wasn’t working, it wasn’t a funny line," he says. "They wanted me to do it like Keanu Reeves because it was 1994." This is pretty hilarious, considering that Keanu Reeves' "Whoa" face did become a meme decades after he made it in 1989's Bill and Ted’s Excellent Adventure.

Lawrence's "Whoa" didn't become a meme at the time, but it clearly made a lasting impact that transcends time and space. Maybe if there had been social media at the time, the catchphrase would've been even more culturally pervasive than it is now — at least, that's what Lawrence thinks. “If there’d been social media, I don’t know how quick it would’ve blown up," he says. "I can only imagine how something like that would’ve taken off today, with hashtags. 'Hashtag whoa,' that probably would have been trended for months."

Even though the actor didn't become one of the most popular memes like Reeves did, his own personal flavor on the "Whoa" line made it memorable. Maybe people in Monte Carlo casinos hear Lawrence's "Whoa" in their minds when they win millions, and maybe pastors hear Joey's "Whoa" when they think about God's glory. Who knows? The only certain thing is that the 90s catchphrase will follow Lawrence forever.