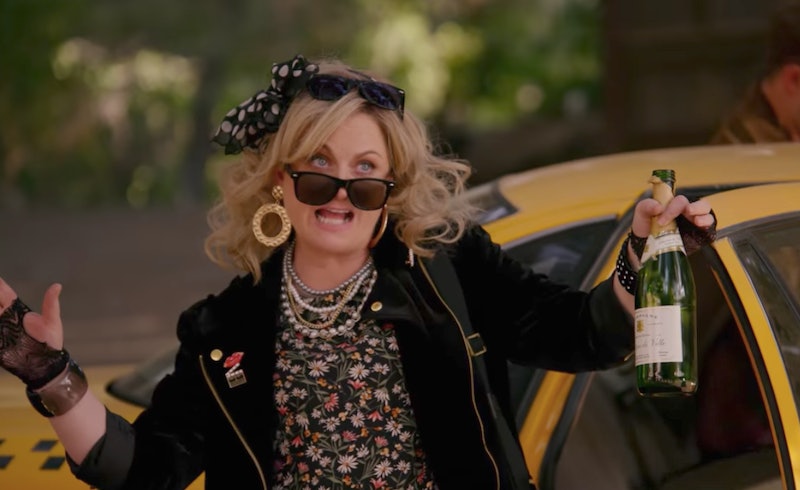 If you're a fan of camp — referring to both summer and the kind of humor — then Netflix's Wet Hot American Summer: Ten Years Later trailer is right up your alley. The series is a follow-up to the 2001 film, and the prequel series, Wet Hot American Summer: First Day Of Camp, which hit Netflix in 2015. Now the camp counselors at Maine's Camp Firewood are reuniting for some new summertime shenanigans a decade later. It's now the '90s — 1991, to be exact — and this trailer is the hilarious nostalgia trip you've been hoping for. There are so many bad haircuts that it's hard to know where to start.

This blast from the past sequel is based on a reunion joke the counselors make in the original movie, where Bradley Cooper's play director Ben makes everyone promise they will get together 10 years later to see what kind of people they blossomed into. Well, there's so much blossoming to behold.

For starters, Elizabeth Banks' exposé on the camp has made her character Lindsay a true celebrity. She's got taxi signs and everything. Amy Poehler's fellow play director, Susie, is no longer a preppy princess anymore, but has gone full-on Madonna. Better late than never right? With his flowing locks and soul patch, Paul Rudd's Andy is now a grunge god who is out Eddie Vedder-ing Eddie Vedder. And, Janeane Garofalo's Beth, well, she's still at the camp.

That's where her former camp counselors come in. It's time to save the camp. From what, you ask? Well, that's still a mystery. But we know that Wonder Woman's righthand man Chris Pine is showing off some killer moves here.

Luckily, the counselors figured out a date and time that would work for everyone. Seriously, it was a whole thing, but it seems they really are making a day of it. Getting this all-star cast together, though, was not as easy. Last time around, writers Michael Showalter and David Wain, who also directed, admitted there was some green screen involved to get people in the same scene because they couldn't actually make it to set. "We wanted to write it in a way that would lend itself to peoples’ busy schedules," Showalter told Variety. "That had to do with the storylines being somewhat separate from each other, though they’re all in the same world."

It's probably why Cooper is sadly not mentioned in the cast rundown, but let's cross our fingers for a surprise appearance. See the rest of the cast come together for the good of the camp on August 4 when all eight episodes of Wet Hot American Summer: Ten Years Later premiere on Netflix.