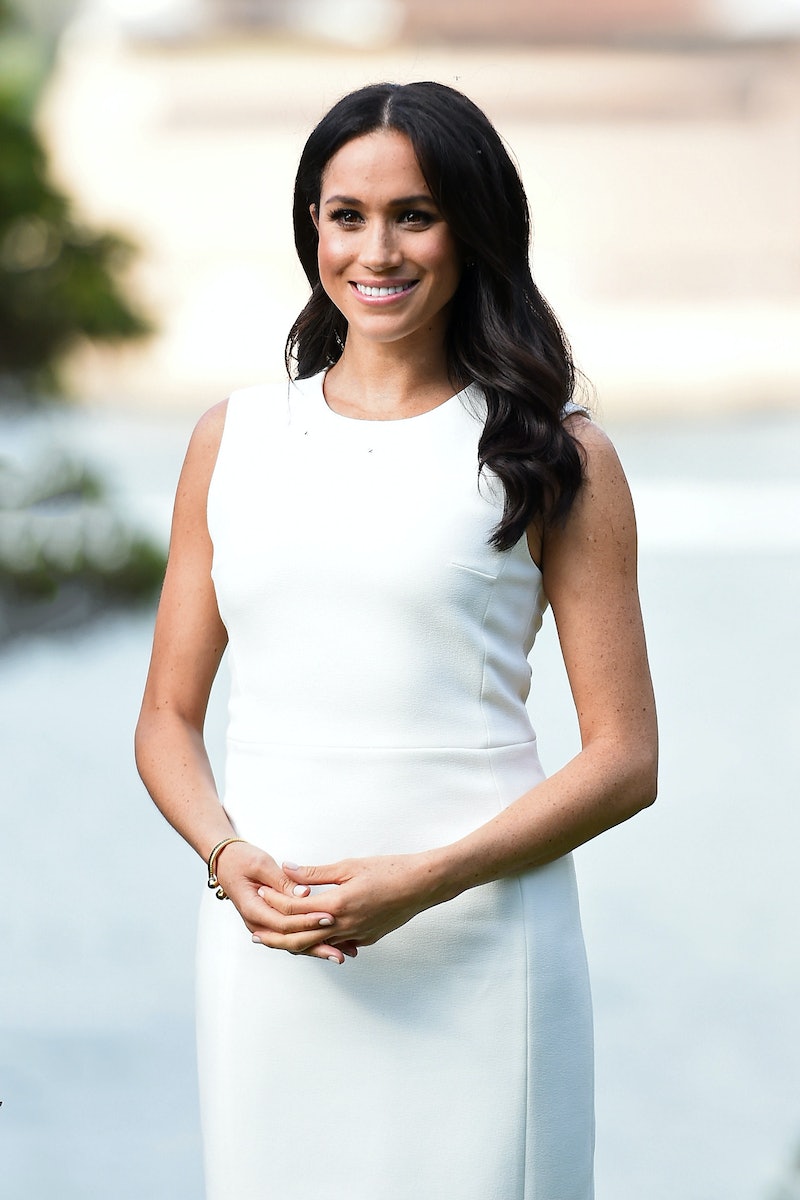 Ever since I found out that Meghan Markle would be joining Prince Harry on his royal tour around Australasia, the Pinterester in me manned the barricades, ready to pin each and every single one of her upcoming outfits to my style inspiration board. It'll come as a surprise to nobody that the Duchess of Sussex has become a major fashion icon — and she proved it on Monday after arriving Down Under. Just moments after landing, the white dress Meghan Markle wore in Australia not only sold out, but so many people were trying to buy the frock that it crashed the site.

The CEO-chic midi dress has since been identified as Karen Gee's Blessed dress in ivory, which will run you a pretty penny. (Not everybody has the royal family to help bankroll their wardrobe.) The designer is a noted change from Markle's usual favourite fashion brands, including her wedding dress couturier Givenchy, as well as Carolina Herrera amongst other local British names.

However, as we all know, a lot of planning goes into Markle's outfits and so there is with good reason she decided to wear a Karen Gee number on Monday. You see, Karen Gee is an ethical clothing brand based in Australia and it was a lovely little nod to Markle's host country, helping to raise the profile of the Aussie fashion world.

The Sydney Morning Herald spoke with designer Karen Gee about Markle wearing one of her numbers. Unsurprisingly, she was super chuffed, saying she was "so proud, particularly because I am not a world recognised brand." She also revealed she had been made to sign a confidentiality agreement and had sent over several pieces for Markle to try on before she eventually decided on the Blessed dress.

Markle styled the dress with an autumn-friendly camel trench and vintage jewellery that has drawn nearly as much attention as her dress. It's for a pretty beautiful reason however as the butterfly earrings and golden bracelet she wore yesterday are actually pieces from Princess Diana's personal collection.

It was a beautiful way of paying tribute to Diana on her and Prince Harry's first tour as a married couple and in the light of her pregnancy being announced by Kensington Palace.

Of course, not everybody has the money for a Karen Gee original, so I've done some digging for similar pieces that will help you channel your own inner duchess. You'll have to figure out your own tour across Australia and ginger prince however.

Quick tip: when it comes to minimal pieces like Meghan Markle's white midi dress, the secret to absolutely nailing the look is an impeccable fit. Never underestimate the power of good tailoring.