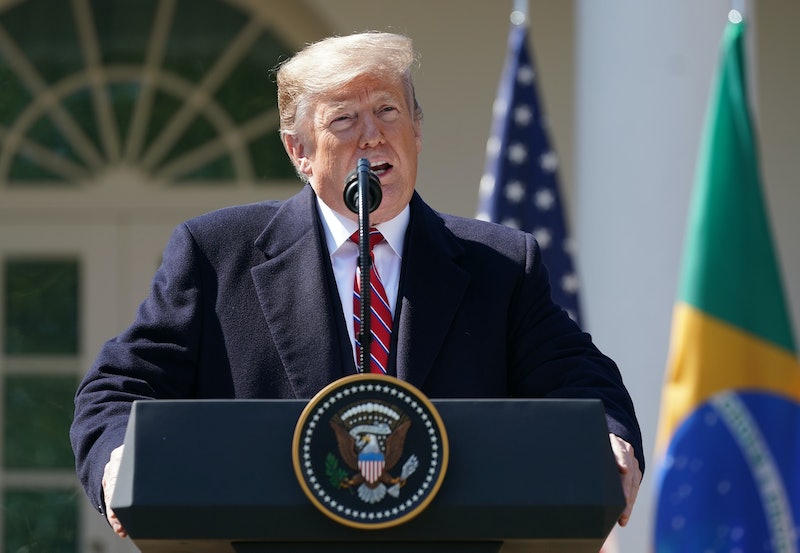 Special counsel Robert Mueller delivered his report on Russia's meddling in the 2016 presidential election to Attorney General William Barr on Friday, and on Sunday, Barr released a summary of the report to Congress in the form of a four-page letter. Though the findings were vague regarding the president's actions, the White House responded to the Mueller report summary with a brief, celebratory statement.

The letter stated that the special counsel's investigation could not find evidence that Trump campaign officials knowingly colluded with Russian officials or the Russian government. But it takes a more wishy-washy stance on whether Trump obstructed justice, according to Politico.

According to Barr's letter, which can be read in full here, Mueller wrote of the collusion, "The investigation did not establish that members of the Trump Campaign conspired or coordinated with the Russian government in its election interference activities." But regarding alleged obstruction of justice by the president, Barr's letter reads, “The Special Counsel states that ‘while this report does not conclude that the President committed a crime, it also does not exonerate him.’”

Mueller's report left the matter of whether Trump obstructed justice to Barr, and Barr concluded that the available evidence didn't "establish that the President committed an obstruction-of-justice offense" beyond a reasonable doubt.

The White House's response focused on the positives of the report summary. "The findings of the Department of Justice are a total and complete exoneration of the President of the United States,” a statement from the White House read, according to NBC News.

Trump did the same. In a tweet posted Sunday afternoon, he wrote, "No Collusion, No Obstruction, Complete and Total EXONERATION. KEEP AMERICA GREAT!"

We think it's a complete exoneration of the President, certainly it's quite clear no collusion of any kind, including the entire Trump campaign, which raises the question, why did this ever start in the first place?

CNN noted that the White House has not received a copy of Mueller's full report — in fact, it hasn't even received a copy of Barr's letter with the report summary. After the letter's release, the only communication between the Department of Justice and the White House was a call from Barr's chief of staff to give Trump attorney Emmet Flood a "read-out" directly from the summary, a justice department official told CNN.

Despite Trump's declaration that the investigation exonerated him, many on Twitter pointed out that there's still a lot we don't know — especially given Mueller's statements on alleged obstruction of justice by the president. Judiciary member David Cicilline told reporters, according to MSNBC's Kyle Griffin:

The Special Counsel did not exonerate the President. In fact ... he described a pattern of evidence suggesting the President engaged in obstruction of justice. The Attorney General needs to make this evidence available to Congress immediately.

The battle to have Mueller's findings released in full will wage on — regardless of Trump's declaration of victory.