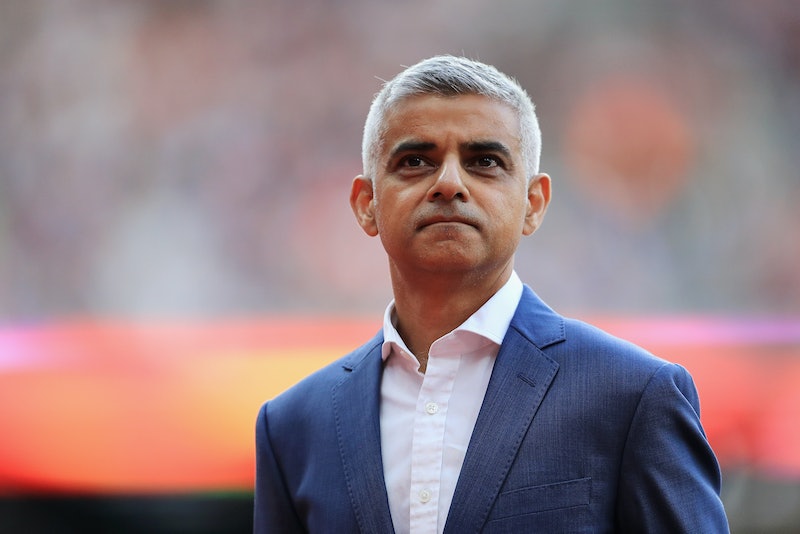 President Trump's populist, anti-immigrant message has roused a number of far-rights groups in the United States, but it appears that his influence has spread to supporters across the globe. On Saturday, a far-right, anti-Islamic nationalist group in England called the "White Pendragons" tried to arrest Sadiq Khan, London's first Muslim mayor, for "disrespecting" President Trump.

According to The Washington Post, Khan was scheduled to give a speech — in which he expressed that the U.K. "cannot allow a populist, anti-feminist narrative to take hold" — when he was disrupted by a group of protestors calling themselves the White Pendragons. The group reportedly burst through the crowd with an actual homemade gallows, complete with a noose and everything, that had the words "TAKE BACK CONTROL" written across the top of the wooden structure.

The men reportedly waved an American flag and shouted pro-Brexit slogans before approaching local police officers at the venue and asking them to arrest Khan, accusing the mayor of "treachery" and "treason." While the protesters did not elaborate on the "charges" they wanted to bring against Khan, one man was identified as the host of a local anti-Islam radio program.

"Mr. Khan," one of the protesters reportedly said, "there's millions of British people supporting Donald Trump." Eventually, after delaying Khan's speech for 15 minutes, the group was escorted off the premises by these same police officers.

The mayor was reportedly not shaken by the protesters. One local news outlet reported that Khan began reading a newspaper while the men shouted their accusations. When the mayor was eventually able to begin his speech, he began by quipping that the protesters were "very stable geniuses."

The controversy comes just days after President Trump announced that he has decided to cancel an upcoming trip to London, claiming on social media that he did not want to visit a city that had made a "bad deal" with President Obama regarding the U.S. Embassy there. Khan, who has long had a contentious relationship with the U.S. President, welcomed the decision.

Khan released a statement of this subject on Twitter:

It appears that President Trump got the message from the many Londoners who love and admire America and Americans but find his policies and actions the polar opposite of our city's values of inclusion, diversity and tolerance. His visit next month would without doubt have been met by mass peaceful protests.

Khan went on to say that it was a "mistake" for British Prime Minister Theresa May to have extended an invitation to Trump in the first place.

Trump and Khan have had a contentious relationship since Trump took office, with both men having made heated remarks about the other via social media. The feud began when London was struck by a terrorist attack in June, which left multiple civilians dead. Khan responded to the incident by sending a message of resilience to Londoners, telling them that they should not "cower in fear." Trump, who has promised to be tough on terror in the U.S. by halting immigration from Muslim-majority countries, responded with a tweet criticizing Khan.

"At least 7 dead and 48 wounded in terror attack and Mayor of London says there is 'no reason to be alarmed!'" Trump wrote, and went on to call Khan "pathetic." Since then, the two men have traded insults over the past few months — at one point, President Trump even challenged Khan to an IQ test.

While the two leaders may not be seeing eye-to-eye anytime soon, it's clear that Trump's ideology and ideals could be resonating with certain groups of Londoners, which could lead to more demonstrations against the London mayor from other far-right groups that support President Trump.