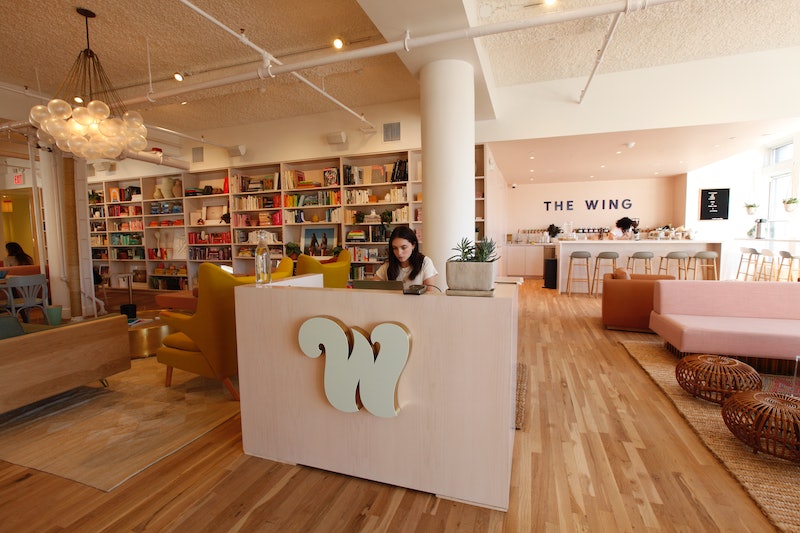 Even if you've never physically stepped foot inside The Wing, you've probably at least heard of it — it's the work and community space designed exclusively for women that opened shop in New York City's Flatiron neighborhood less than six months ago, and has been running non-stop ever since. Next up? The Wing is opening three new spaces in SoHo, downtown Brooklyn, and Washington D.C., meaning there will be even more opportunities to get involved in what's become a go-to gathering spot for women looking to relax, recharge, meet up, network, feel inspired, and you know, generally rule the world. "[Without men] our members feel more productive," Audrey Gelman, founder and CEO of The Wing, tells Bustle. "There's a kinetic energy when large groups of women are together."

Just like The Wing's flagship location in Flatiron, each new branch will feature a daytime communal co-working space with phone rooms — and the new locations will also feature private offices and conference rooms. By night, each space will host networking programs and a social club for women to make IRL personal connections — a concept that Gelman says ignited her initial inspiration for the club. "In a time when everything is digital, opening a physical space was counter-intuitive," she says. "There was a lot of skepticism, but it ended up being the thing that attracted people to it. Having an IRL physical space where connections can be made definitely hit a nerve, and became a part of our members' lives in a way they weren't expecting it to."

Of course, as Gelman points out, the concept of a women's club is nothing new. In the early 1900s, there were thousands of women's clubs scattered across the country. But, shortly after the 1960s, their popularity began to fade, and the idea of a women's club became something of an antiquated novelty. Gelman, however, had a hunch that a comeback could work, and judging by The Wing's waitlist that runs over 3,000 applications long, it seems she was right. Her goal to create a diverse and passionate network for women to support each other's professional endeavors has proven attainable; the club also features products and small businesses that are run by women.

And while the physical component of the business is central, Gelman isn't immune to the perks of digital connectivity. The Wing will soon release an app for its members from different clubhouses to connect, direct message, share job listings, nurture friendships, and support each other's aspirations.

So how do you apply? Current member pricing is $215 a month, or $2,250 a year — a price comparable to other club memberships in New York like SoHo House or WeWork. And, Gelman hinted that a more financially accessible membership tier is on its way, in addition to a future westward expansion.

We may live in ever-changing times, but it looks like, at least for now, the women's social club is sticking around.