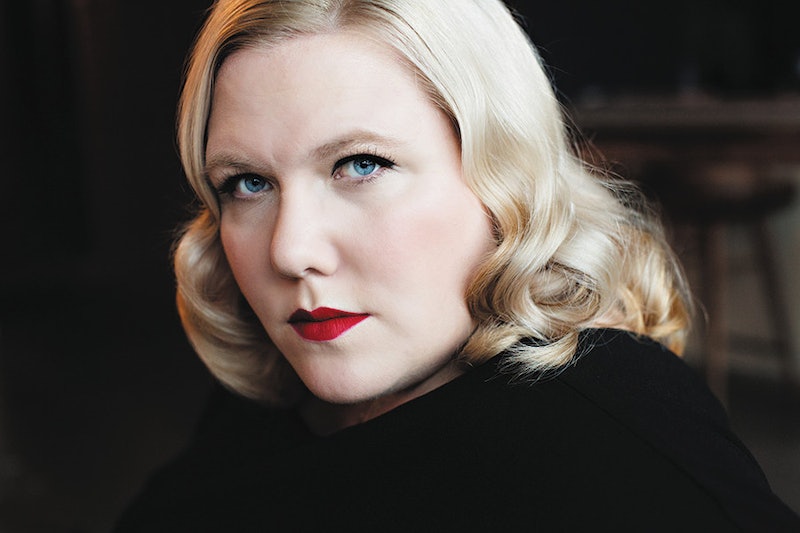 Lindy West and I are talking about the state of women in comedy when she trails off mid-sentence.

"Wow, the biggest dog just got out of the car in front of me," she says. "I'm sitting in my car, and a woman got out of a car with, like, a whole Saint Bernard, which I don't ever see. It's so big!"

In her 2016 book, Shrill: Notes from a Loud Woman, West criticized the kind of anti-feminist words and actions that seek to tear down and prevent women's solidarity.

"[W]hen you pit women against one another, keep us shackled by shame and hunger, obsessing over our flaws rather than our power and potential; when you leverage all of that to sap our money and our time," she wrote, "that... steers humanity toward conservatism and walls and the narrow interests of men, and it keeps us adrift in waters where women’s safety and humanity are secondary to men’s pleasure and convenience."

In her new essay collection, The Witches Are Coming, West acknowledges the ever-so-slight turning of the tide — a sea change that has left women, queer folks, people of color, and other marginalized groups with some recourse against microaggressions and full-on assaults from those in positions of privileged power. Witches highlights the shifts in perception — both in West's personal life and on a societal scale — that have taken cisgender, heterosexual, white men down a peg, to a level of accountability that's closer to the standard to which the rest of us are held.

West tells me that the title of her book "is a reaction to the way that 'witch' is deployed against women, especially, but really [against] anyone who speaks an uncomfortable truth that challenges the status quo. It's a direct response to the tendency to cry 'witch hunt' when you're accused of something credible."

"I have too many jobs," West tells me. Chief among them is the second season of the recently renewed Shrill — the Aidy Bryant-headed Hulu Original based on West's 2016 book. But West is also hard at work on a third book, as well as on her contribution, with husband Ahamefule J. Oluo, to Shonda Rhimes' new Netflix series, Notes on Love.

"[I'm] just trying to be a creative, engaged person who uses my platform as best I can."

West is also an activist, taking up the banners of reproductive justice, climate change, and fat acceptance, all with the same unapologetic realism that shines through other areas of her life. In addition to founding the #ShoutYourAbortion campaign, which aims to destigmatize the life-saving medical procedure, West also uses her platform to encourage people to take climate change seriously. In a 2017 opinion piece for The New York Times, West wrote that "Americans are feeling the impacts of climate change right this second." That's certainly more true today, as warnings from experts grow more dire with each passing report.

"[I'm] just trying to be a creative, engaged person who uses my platform as best I can," West tells me. "I can't single-handedly fix the Arctic Sea ice, but I can use my little platform to galvanize and harass people, whichever one they need. To help people feel less alone, and help people hopefully feel a little bit more optimistic and empowered — I'm just going to keep doing that, and hopefully make people laugh and take the edge off the despair a little bit so we can all go do our work."

In the Q&A below, West talks about the mischaracterization of the #MeToo movement as a "witch hunt," how bad communication has led us to now, and why hopelessness won't solve any of our problems.

So the book is called The Witches Are Coming. Witchcraft is on the rise in America among millennials and Gen-Z, but I think the book kind of defines "witch" a little bit differently. Can you talk about who or what a "witch" is, within the context of the book?

I think that it's become a trope for powerful men to claim that we're living in a witch-hunt atmosphere, where people are being falsely accused of crimes they didn't commit or bad behavior that they didn't actually engage in. Which I guess means, [people shouldn't] tell the truth about what's happened to them and their lives? Because that's really all we're dealing with here. It's just a lot of people coming forward and being candid, and very brave, and very honest about things that have been done to them.

If it's a witch hunt to tell the truth, then fine. We're witches, and we're hunting you.

That was the genesis of the title. It was the headline of a column I wrote for The New York Times, kind of reclaiming the term "witch" and also to [show] truth-telling as a kind of magic. We're seeing the transformative powers of the truth all the time right now. Our current administration is actively hostile to the truth. Donald Trump is constantly trying to re-write reality.

So really, the book is about the power of telling the truth, and the importance of living in reality rather than a comfortable fantasy.

In the book you say, "When reality doesn't favor [Trump], he simply says what he wants to be true. And in the minds of his fanatics... it becomes true." What do you think is coming down that road with us and Trump?

It certainly feels like there's some momentum. He did an actual crime, and then said that he did it, on camera. So something's gotta shift a little bit, right?

"I really think it's tempting to feel hopeless, and hopelessness is so counter-productive."

I really think it's tempting to feel hopeless, and hopelessness is so counter-productive. I just never see any utility in declaring that we lost in advance. Why concede when it's not over yet?

Do you think that the state of the state for women in comedy is improving?

Oh, yeah, for sure. It just feels like female comics and queer comics, trans comics — these are the people at the absolute peak of comedy right now.

Obviously, like in any industry, I'm sure there's still tons of structural problems, tons of sexism in terms of booking. But I absolutely feel like the field has opened up, and marginalized people — people who have traditionally not been allowed to fully be themselves, and thrive, and demand full respect and equality in their chosen field — are now absolutely dominating the scene and making the funniest comedy that exists right now.

Even if you look at the cast of Shrill, everyone is so funny. It's like the funniest people working today are on that show, and it's not a bunch of 40-year-old white guys. A bunch of us complained a whole bunch about comedy being sexist and shitty, and it's better now. I feel like we won, to some extent, and I'm so happy.

When I say, "we won," it's to everyone's benefit, because what you get is funnier jokes from geniuses who were formerly overlooked or silenced. It expands not only who gets to do comedy, but also who can go see comedy and have a good time.

Do you think that this brand of 40-year-old white guys who complain about women and free speech is going to die out and stop getting Netflix specials?

The point is that they're not entitled to be the only ones getting Netflix specials.

There will always be some people who are threatened by progress, and who want to go back to the way it used to be. But the success of those movements ebbs and flows, based on how firmly the rest of us reject those movements, and how fluently we communicate with each other, and how willing we are to be self-critical, and really think about who we want to be as a country, and as a people, and look honestly at our own history.

In the book, there are all these dark topics, but they're all kind of offset with this humor. How do we keep on laughing if things get worse, or if things seem like they get worse?

I think that when you're in a place of despair or hopelessness, it's really easy to isolate yourself and feel alone and miserable. It's just really important to remember that we're all still here, and we are still alive, and we are still just as powerful as human beings as we were before, and to really spend time in your community, and with the people that make you happy and that make you feel like yourself.

"It's important to remember that it's OK to find moments of happiness even when the world is burning down."

Again, hopelessness is not going to save us, but connection, community, and collective action are. It's important to remember that it's OK to find moments of happiness even when the world is burning down. I think it's also easy to feel guilty about being happy, and as long as your happiness isn't complacency — as long as you're able to remain engaged with the world while also having some moments of light and joy and not just living in a despair place — that's good. That's what you have to do to keep going and keep fighting for your fellow human beings.

What's the one thing you want readers to take away from the book?

People are so afraid of "callout culture" or "cancel culture" right now, whatever you want to call it. That's another thing that's constantly referred to as a witch hunt.

I hope that people can take away that it's OK to make mistakes, and it's OK to be called out on things, and to hold yourself accountable, and have tough conversations, and learn, and grow. Everyone's so afraid of getting called out, but people are dying to forgive you. If you just actually do the work that it takes to hold yourself accountable and make amends, people love it!

I feel like this is a problem with America, where America's afraid to look at our own horrific history and why we are the way that we are — why we are prosperous and powerful, and how much that has to do with the exploitation of other human beings who are still being exploited. America doesn't really want to talk about race in a real way. People don't want to feel implicated in something horrific, but you have to reckon with it. Otherwise, you're perpetuating that violence.

People are just terrified of accountability, and terrified of doing the work of growth. I just hope that people take away from this book that it's not a curse, it's an opportunity.

This is the work of being alive. We're a communal species, and we live together in societies and in communities and in family groups and in partnerships. You gotta figure out how to talk to each other, or it falls apart.

Donald Trump is a beneficiary of our absolutely broken communication system in this country. The fact that we cannot have honest conversations about who we are and what we've done — that's what leads to entrenched partisanship. People can pass absolutely unjust laws, suppress black voters, and gerrymander. All of these things are the product of tainted, twisted, warped communication and a failure to teach and believe and internalize the truth on a large scale.

The Witches Are Coming by Lindy West is available now from Hachette.

More like this
16 Novels That Paint A Realistic Portrait Of Abortion
By K.W. Colyard
This Michigan Couple Really Won $27 Million After Finding A Lottery Loophole
By Brad Witter
Lauren Rae Is Bringing Back The Sex And The City Vibes In Her New Memoir
By Shahed Ezaydi
Annie Lord’s Memoir Will Make You Believe In Love Again
By Shahed Ezaydi
Get Even More From Bustle — Sign Up For The Newsletter