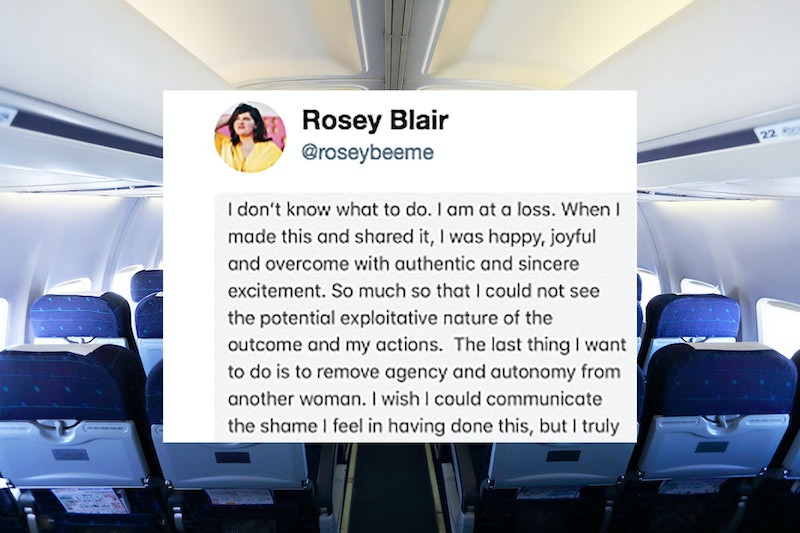 Last week, Rosey Blair went viral for live posting on Instagram (and cross-posting on Twitter) about a possible budding romance unfolding between two people seated in front of her on a plane. Blair positioned herself as a modern-day matchmaker after she asked the woman to switch seats so that she could sit next to her boyfriend. The ensuing social media posts included photos with the pair’s faces blurred, commentary about what they ate, their body language, hints that they may have hooked up in the bathroom, and even snippets of their conversation. The story was hugely popular on Twitter and Instagram, garnering thousands of retweets and reaction photos. It even got its own hashtag, #PlaneBae. After all, who hasn’t fantasized about connecting with a hot seat mate on flight?

The story was so popular that it was picked up by websites and news outlets — including Bustle — and Blair, her boyfriend, and the man in the seat in front of her (who was identified as a former pro soccer player named Euan Holden) appeared on the Today Show. But one person was conspicuously missing: The woman.

In a video that’s now been deleted, Blair coyly encouraged her followers to find the “pretty plane girl” by telling them that she didn’t have “permish” to share her name but acknowledging that “[y]ou guys are sneaky.” But it turns out that the woman “featured” in Blair’s posts not only didn’t want to be publicly identified but actually closed her social media accounts after Blair’s followers did exactly as they were told — and then some.

Because the double standard is real, some of the people who commented on the woman’s Instagram photos after she was doxxed called her a “skank,” “slut,” and left comments like “Lol you blew that guy in the bathroom”, reports The Daily Dot. While Holden gained tens of thousands of Twitter followers and spots on international television, the woman he was supposedly romantically interested in was slut-shamed and harassed off the internet. All because the person in the seat behind her shared with the world that she stood up and went to the bathroom the same time as her seat mate, which is something I’ve done approximately 500 times because it’s polite.

The latest in the saga is an apology from Blair, in which she explains why she shared this private moment without the consent of the people involved and apologizes to the woman.

Viral stories are, by their very definition, stories that grip us. Whether it’s shaming — like the story of Justine Sacco and the pile-on after she tweeted an insensitive and off-color comment about AIDs and Africa — or romance, we love getting caught up in the communal emotion of a great viral story. It’s so easy to retweet; to grab a glass of wine and snap an excited selfie; to say nasty or kind words. And it feels good to be part of the collective. So good, in fact, that we don’t usually think about the consequences of our actions until it’s too late.

And so people shared and shared the story of #PlaneBae because they were caught up in that feeling. But the problem with getting caught up in the moment of a viral story is the fact that there are actual people on the other side — and when the dust settles and we’ve moved on, they’re left picking up the pieces.

I highly doubt that the majority of people who retweeted the #PlaneBae story thought about how weird and invasive it was that Blair was photographing and sharing things about these strangers without their consent. Or what it would feel like if they were being photographed and broadcast to the world without their consent. Or even the consequences of revealing the woman’s name and social media accounts.

But therein lies the problem of mob mentality at any level: It doesn’t have a brain. Human beings have shown time and time again that when we get swept up in a collective, we do stupid — and sometimes horrifying — things. You can see it in every genocide where people turned on their neighbors. And you can see it in viral stories like this one.

Now, I’m not saying that the impact of #PlaneBae on that woman’s life is the same as the impact of being killed by their neighbors in Germany, Rwanda, or the Balkans. Of course not. Obviously getting slut-shamed and harassed off of social media is not the same as trauma from genocide. But what I am saying is that all are examples, on a scale, of what can happen when humans succumb to mob mentality. And we should be critical of mob mentality whenever it shows up, even when it seems innocuous or just a sweet story.

It's important to take a minute to think about what you’re viewing, saying, or posting instead of automatically retweeting or reposting or sharing. Because while it’s easy to cast the blame fully on Blair and Holden, everyone is complicit in this. Viral stories just wouldn’t be viral otherwise.