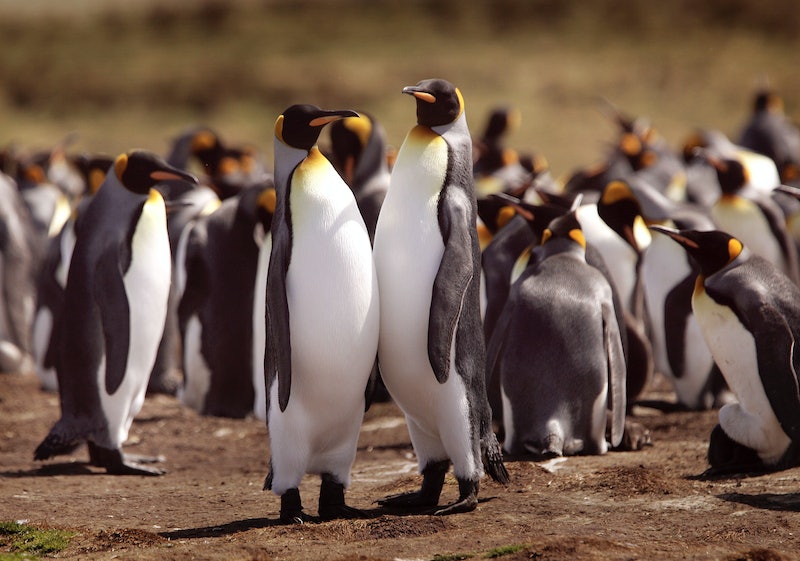 Over the last three decades, the world’s largest colony of king penguins (and second largest penguin colony in the world) shrank by nearly 90 percent, a recent study published in Antarctic Science found. In the southern Indian Ocean territory of Île aux Cochons (translation: Pig Island), aerial and satellite imagery of the penguins documented changes in the population size over the course of 50 years. The island was last visited by scientists in 1982, and the photography is a rare glimpse into the extremely inaccessible ecosystem.

Researchers flew over the island by helicopter in 2016 and noticed a decrease in the visible number of penguins. After studying decades worth of satellite images, they estimated that in the span of 35 years, half a million breeding pairs of penguins dwindled to 60,000.

Emiliano Trucchi, an evolutionary biologist at the University of Ferrara in Italy who also studies king penguins, told The New York Times he was "disturbed" by the results of the study. “It deserves further investigations,” he noted. “It’s a very peculiar process and we need to understand how to fit this into the big picture.”

King penguins, second only to emperor penguins in size, have the lowest possible conservation status of “least concern,” meaning they aren’t considered a threatened species, but such an unprecedented drop in population is alarming.

The researchers behind the most recent study, a team from Chizé Center for Biological Studies (CNRS), don’t specifically cite climate change in their report, and are inconclusive on the cause of the massive decline. Some potential reasons include: diseases and parasites that impact breeding success and survival, along with competition for limited resources and introduced predators like feral cats. Notably, the decline was progressive, indicating a long-term decrease in the colony that “appears to be ongoing,” according to the report.

The causes of decline may still be active, and a study from February, published in Nature Climate Change, suggested a link between global warming and the destruction of king penguin’s ecosystems more generally. The study projected that warming seas from climate change may force populations to relocate or risk decline in the long term.

The New York Times reported that the CNRS team want to do a head count on-site, but will not be able to get to the island before late fall 2019 due to cost and timing. If the satellite images end up being accurate, the global population of king penguins would be significantly diminished. The penguins had not been considered endangered before, but might now be, said Dr. Henri Weimerskirch, research director of the Chizé Centre for Biological Studies at the French National Centre for Scientific Research, to The New York Times. According to the International Union for Conservation of Nature (IUCN), some factors that determine whether a species is endangered include their current population size, significant decreases or increases in population over time, and breeding success rates.

Of the 18 species of penguin listed on IUCN's Red List of Threatened Species, 13 species range from "Near Threatened" to "Endangered." It remains to be seen whether the king penguin will join their ranks.

More like this
If You Have Pets, You Probably Don't Realize You're Making These Common Mistakes
By Mackenzie Edwards
The 5 Best Brushes For Short-Hair Dogs
By Tiana Crump
Anguilla Is The Under-The-Radar Caribbean Destination You Need To Visit
By Rachel Lapidos
44 Impressive Secret Santa Gifts That Won't Break The Bank
By Sadie Trombetta and Lauren Grant
Get Even More From Bustle — Sign Up For The Newsletter