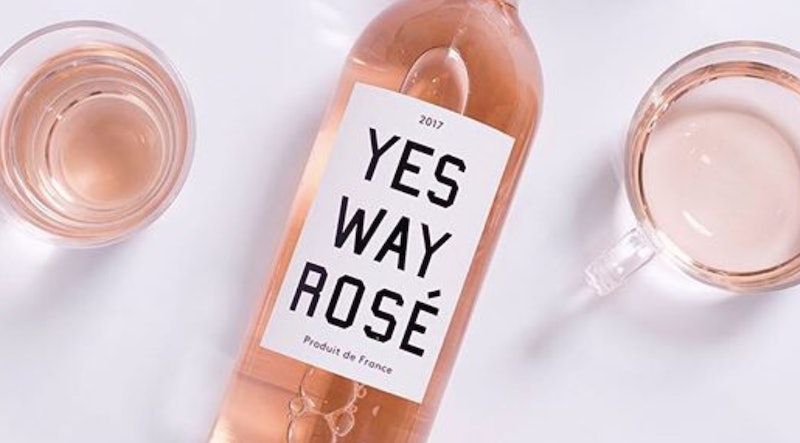 Even though the groundhog told us we’d be getting six more weeks of winter this year, springtime is fast approaching — and here’s just the thing to celebrate it: A beautiful-looking, $13 rosé wine is coming to Target. Brought to us by the creators of the Instagram account-turned-lifestyle-brand Yes Way Rosé, the wine, too, is called Yes Way Rosé; as such, the drink’s Instagrammability is virtually guaranteed. What’s more, we only have to wait a few short weeks to get our hands on it: It’s scheduled to arrive at more than 1,100 Target stores nationwide starting on March 4, according to a press release. Yes please!

In 2013, Erica Blumenthal and Nikki Huganir created the Yes Way Instagram account after bonding over their mutual love of pink blush wine. According to an interview with the duo published by Forbes in 2016, both women come from creative backgrounds; Blumenthal is an editor and writer who has focused largely on fashion, while Huganir is an art director. As such, both have an appreciation for beautiful, well-presented images — which, unsurprisingly, is what the Yes Way Rosé Instagram page is full of. The images, they write on the Yes Way Rosé website, were meant to “capture how rosé was changing our lives” in a “playful voice” and with a “modern look.”

Their philosophy and aesthetic seemingly struck a chord among their followers, because, as they note, “The most amazing thing happened: A community of fellow like-minded rosé enthusiasts formed.” From there, they began spinning out the Instagram account into a lifestyle brand, creating merchandise emblazoned with their catch phrase as they went. The signature Yes Way Rosé tote bag —a canvas tote with the words “YES WAY ROSE” written across it in large, capital letters — came first… and the rest, as they say, is history.

It’s only to be expected that they’d eventually turn their attention to creating their own wine. In 2015, they teamed up with Winc to bring out Summer Water, a California rosé made from a blend of Central Coast Grenache and Syrah grapes — and now, they’ve added a namesake wine to the mix. Described on the Yes Way Rosé website as “dry and refreshingly drinkable,” the wine is an “Provençal-style blend” made in the south of France with Mediterranean grapes; its tasting notes include a bouquet of strawberry, citrus, and white peach. The goal, said Blumenthal and Huganir in a press release, was “to create an exceptionally beautiful, high quality rosé that’s accessible to as many people as possible.” They added, “We want anyone who thinks pink to be in on the fun.”

Although I am firm believer of drinking whatever wine you want, whenever you want, regardless as to whether or not it technically “pairs”with whatever you’re eating, there’s no doubt that Yes Way Rosé will compliment some specific options particularly well. Cheese and charcuterie, for example,will likely be hits with it, as will seafood, pasta, or spicy dishes like curries. Whatever you drink it with, though — or even if you just enjoy a glass all on its own, without any additional nibbles — you’ll definitely want to serve it chilled. (Warm rosé is… not great.) According to Vinepair, blush wines are best served at a temperature of 50 to 60 degrees Fahrenheit; however, Fine Wine Reserve recommends taking things a little cooler, suggesting a range of 41 to 45 degrees Fahrenheit.

Although the wine won’t be available for purchase until March 4, the listing for Yes Way Rosé is already live on Target’s website. From there, you’ll be able to see which stores near you carry it and whether it’s available for in-store pickup. The best part, though? Is Yes Way Rosé’s affordability. It’s not quite Two Buck Chuck-levels of affordability, but at $13 (well, $12.99, technically), it definitely won’t break the bank. As its creators like to say, it looks like it’s going tobe “a qualité rosé that doesn’t take itself too seriouslé” — which, honestly, is exactly what many of us need right now, no matter how goofy it sounds.

Yes Way Rosé arrives at Target on March 4, 2018. Get ready to toast to spring, summer, and beyond!