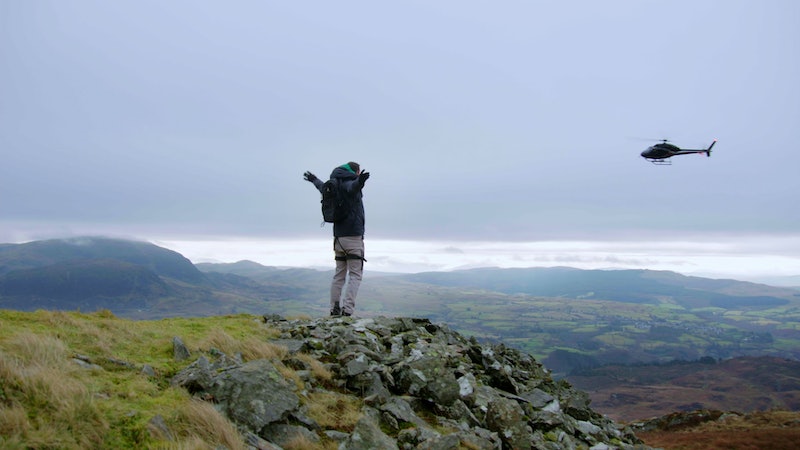 Bear Grylls has proven himself to be a skilled survivalist, but as the You vs. Wild endings show, he may not fare as well when he's leaving decisions up to viewers at home. In each episode of the new, interactive Netflix series, Grylls is tasked with trying to save someone stranded in the wilderness, performing an important, high-stakes task, or just trying to navigate his way out himself. Along the way, you have to make his choices for him: should you take your chances with the snake, or the crocodile? Should you repel down the cliff, or just throw caution to the wind and jump?

There are a lot of ways to fail — one wrong move, and Grylls could find himself getting chased through the dark by a wolf, or that Saint Bernard you were supposed to rescue ends up lost forever in the Swiss Alps. But if you've picked up any survival tips from following Grylls's career, you might be able to game the system pretty smoothly. Think of Man vs. Wild as a crash course, andYou Vs. Wild as your final exam. And if that doesn't help, here are a few pointers for getting through the show.

The secret to the first episode is to take a clue from the title — go through the jungle, avoiding the river and the crocodiles that inhabit it. Make sure you bring a slingshot with you so you can fight off any Howler Monkeys as you follow their cries, and you'll end up right at the stranded doctor you've been tasked with finding. It's the fastest route, but this path skips the scene in which you get to choose whether or not Grylls eats a grub or termites — which has no impact on if he finishes the mission. He just wants viewers to know he'll eat whatever they tell him to.

This time, Grylls has to deliver medicine to a remote village, while ensuring the medicine doesn't get so hot that it becomes ineffective. Grylls will give you plenty of opportunities to stray from the "cold chain" route, but as long as you make choices that will keep you cold and follow the path others have made, you'll find yourself in the village in no time — but do feel free to go fishing instead of chowing down on frogspawn.

"Searching For A St. Bernard"

As you search for Dana, the best way to get to the missing St. Bernard is to stay close to the ground and be patient. There's no need to run, sleep in a rushed shelter, or eat bear feces if you don't have to. If you take your time instead of rushing, you'll find your furry friend waiting for you in an open snow field beneath a cliff and be driven out in a snow plow.

"Lost On Snow Mountain" is the first episode of You vs. Wild that doesn't follow Grylls trying to rescue or help someone. Instead, he's just stranded in the mountains. It seems like the purpose of this episode is to show that sometimes even making the right choices can go wrong — but making the choice to stay in one place is the best way to ensure the 24 hours passes quickly before the extraction helicopter pulls Grylls back to safety.

Here, Grylls is trying to find anti-venom from a crashed plane in the desert. The most important decision you can make in this episode is going out of your way to stay hydrated so you're in good shape when you finally get to the wreckage — only to discover the anti-venom containers have been smashed in the crash.

Always the people pleaser, however, Bear is willing to try and make some of his own anti-venom so that he doesn't return empty-handed. Head for the mine, follow the water, and make smart choices about how to collect a snake, a scorpion, and a snake — usually whichever option seems like it'll take longer is the way to go — and you'll be a one-Bear anti-venom emporium in no time.

"Land of the Dragons"

The lessons that have been learned so far are likely starting to pay off here — just try not to eat anything that Grylls is unsure about. Be patient when you get caught in quicksand, avoid the risk of running into animals at every turn and always — ALWAYS — trust your rappel. If you survive, you'll come across a road where you can almost certainly find a passerby to lead you to safety.

"Myth Of The Abandoned Mine"

This adventure starts with Grylls asking if you want to do a backflip or a front flip out of the helicopter, which has no impact on this episode — but nearly every other choice does. After that, the best choice is to keep moving, because the path lets you chase and cuddle with a sheep. Unfortunately, there's no choice to just keep cuddling with the sheep, as you have to make your way down a miner's rope to get back to the civilized world.

If you do happen to make a wrong choice, You vs. Wild is incredibly forgiving. Should your mission fail, the show will take you back to the last decision you made and give you the chance to take another path.

Seeing everything that You vs. Wild has to offer is a massive endeavor, as some scenes may be tucked away and only reachable through very specific choices, but anyone watching the series solely to "win" will still walk away with a lot of knowledge about what to do should you ever find yourself in a survival scenario.