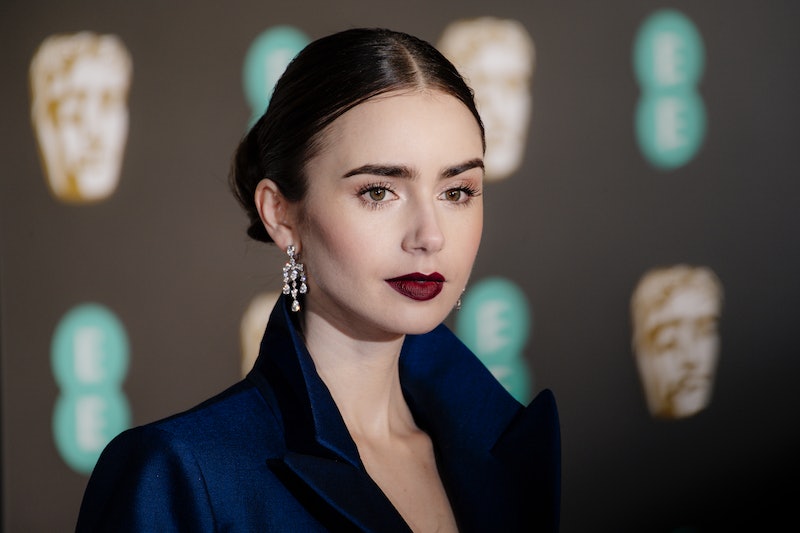 Unlike Lauren Conrad, Lily Collins will now officially be known as the girl who did go to Paris. Collins is set to star in the the new series Emily In Paris from Younger creator Darren Star, which yes, has the actor heading to France for an adventure. Ooh, la la.

On Wednesday (April 3), Variety reported that Collins will star in the half hour dramedy from Star, who also created Sex and the City, about a "driven twenty-something from the Midwest who moves to Paris for an unexpected job opportunity" at a French marketing firm. It's safe to say Emily experiences a bit of a culture shock as an American in Paris learning to juggle a new job, friendships, and love. Let's also hope Parisian fashion will also play a part in this series.

In a statement to Variety, Collins called working with Star a "real ‘pinch me’ moment," adding, “All of Darren’s shows have deeply defined, greatly impacted, and undeniably helped me navigate my journey into womanhood." A sign that this expat series might do the same for other young women.

On Twitter, Collins also shared her excitement about the casting, letting fans know that Emily in Paris is a big milestone for her. "I'm beyond excited because not only do I get to star in this show," she said. "It's also the first project I get to be a producer on so I'm completely over the moon."

The show, which was picked up for a 10-episode run, is set to premiere early next year on Paramount Network. Filming for the series starts this summer, in yes, Paris, which is why Collins, who last starred in Amazon's short-lived TV series The Last Tycoon and BBC's Les Misérables, told her Twitter followers she has some studying to do. "I guess for now it's just au revoir," she said. "And I've really got to start working on my French."

This year is going to be a busy one for Collins. Not only is she starring in Emily In Paris, she's also starring alongside Zac Efron in Extremely Wicked, Shockingly Evil, and Vile about serial killer Ted Bundy. In the film, premiering on Netflix next month, Collins plays Bundy's longtime girlfriend Elizabeth Kloepfer. The movie takes a closer look at why Kloepfer didn't believe the truth about Bundy.

In an interview with Bustle at Sundance, director Joe Berlinger said looking at Bundy's stories through Elizabeth offers a new take on his story. "The fact that somebody like Ted Bundy got away for so long, eluded capture for so long, because he was charming and manipulative and people around him thought he was not capable of these crimes, that’s a lesson you can’t learn enough and a very valid lesson to put out into the world," Berlinger told Bustle.

Collins will also appear in Tolkien, about Lord of The Rings author J.R.R. Tolkien, and Halo of Stars, based on the long poem The Clown. Clearly, she's going to be busy for the next few months, so might we maybe suggest signing up for DuoLingo to help with her French lessons?

More like this
Netflix Reveals First Look At Wednesday In The 'Addams Family' Spinoff Series
By Bustle Editors
The 'Andor' Timeline, Explained
By Gretchen Smail
Watch The Thrilling Teaser Trailer Of 'Shadow And Bone' Season 2
By Gretchen Smail, Jack Irvin and Sophie McEvoy
A New 'And Just Like That' Table Read Pic Confirms A Key Character's Return
By Jack Irvin and Grace Wehniainen
Get Even More From Bustle — Sign Up For The Newsletter