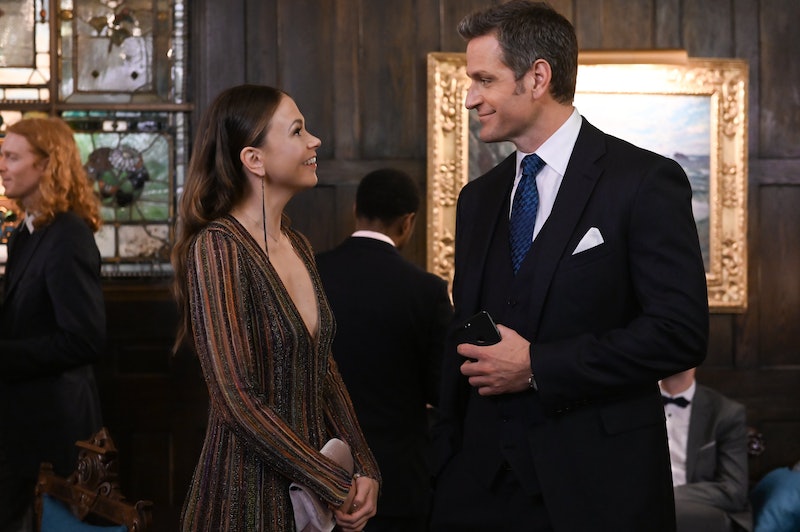 Love triangles are easy plot points for new shows, since they're rife with drama almost by definition. But depending on how interesting the players are, they can also get very, very old. There are only a couple of TV love triangles that can really endure, but the best ones usually have some sort of resolution, like Jane, Michael, and Raf on Jane The Virgin, Dylan, Kelly, and Brendon on Beverly Hills 90210, or Dawson, Pacey, and Joey on Dawson's Creek. Josh, Charles, and Liza from Younger will certainly go down in television love triangle history but that doesn't mean that the suggestion that Charles is once again competing with Josh for Liza’s perfection isn't alarming. The Josh, Charles, and Liza love triangle on Younger is played out and it needs to be over like, last season.

Josh and Liza were the show’s original OTP, but as Younger progressed, it became really apparent that they weren’t right for each other. Josh wanted children and Liza was at a point in her life where that wasn't going to happen for her again. So when Charles came into the mix — a handsome, sexy AF, successful, and intellectual match for Liza — well, the stakes got higher and Liza ultimately made her decision and chose him. At the end of Season 5, that was an appropriate plot turn.

Right now, Charles and Liza are in the midst of negotiating their new relationship. They’re dating and the world still thinks she’s 28 years old. Charles and Zane have also started their own company to compete against Millennial, effectively pitting Charles and Liza against each other in the book publishing market. There's a lot going on.

Falling in love is exciting and sexy and fun, but it’s when the honeymoon ends do things get really interesting. Charles and Liza’s new reality has so much more potential than Younger falling into the tired tug of war between Liza and the two men in her life.

Speaking of Josh, he’s really had an awakening as of late, too. Josh just had a baby with his ex-wife, Clare, and he's already embracing fatherhood. He always wanted to be a dad, and so far, he’s successfully co-parenting with Clare. Isn’t Josh so much more interesting when he’s not pouting over Liza? As Nico Tortorella said in an interview with Bustle last year, Josh doesn’t even have a last name on Younger — we know so little about him.

This is a chance to really build out Josh as a person, because for the first handful of seasons of Younger, he was simply in Liza’s orbit. He was there for Liza and only for Liza. Watching Josh be a dad and cultivate his amazing friendship with Lauren has been one of the joys of the season. More of that, please.

Younger does so much in a half-hour program — lampooning the publishing industry, battling sexism, and talking about the hard parts of love and relationships. Fans don't need a love triangle to stay interested.

More like this
Michael B. Jordan Tackled His "Public Breakup" With Lori Harvey On 'SNL'
By Brad Witter
The Bachelor’s Christina Mandrell Comes From One Of Country Music’s Most Famous Families
By Brad Witter
Nicole & Chris Hinted They’re Still Together After 'Married At First Sight'
By Brad Witter
Here’s What Happens To Bill & Frank In 'The Last Of Us' Video Game
By Brad Witter
Get Even More From Bustle — Sign Up For The Newsletter
From hair trends to relationship advice, our daily newsletter has everything you need to sound like a person who’s on TikTok, even if you aren’t.