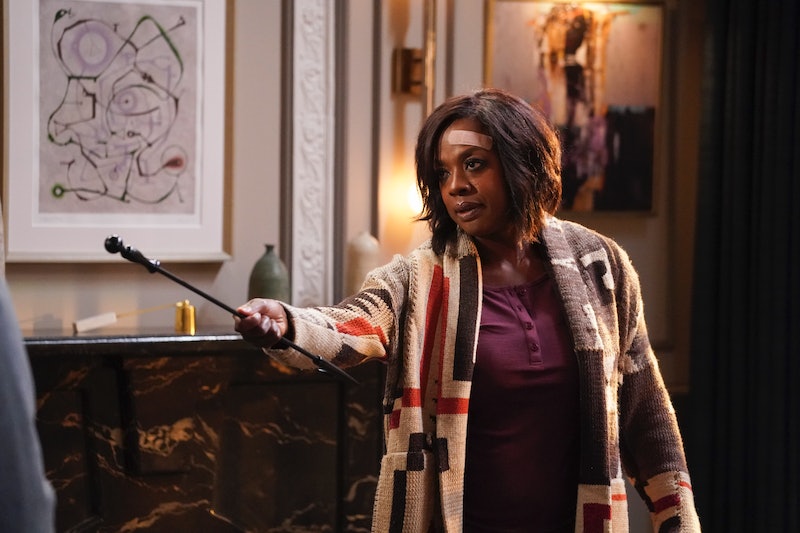 Throughout the past six seasons, Annalise Keating has made her fair share of enemies, and now if the latest flash-forward in How To Get Away With Murder is to be believed, her lies and actions are about to result in some deadly consequences. Theories about Annalise's death on HTGAWM definitely aren't in short supply and make it difficult to know who exactly is to blame for the crime. The suspect list is a mile long and almost everyone had an incentive for wanting to take her out for good — if that's actually what happened.

The very first moments of the Season 6 premiere foreshadowed the fate of Viola Davis' character. As part of a rehab exercise, Annalise was instructed to picture her own funeral and take note of the reactions and feelings of the loved ones left behind. Bonnie & Co. seemed relatively relieved that she was gone, at least in Annalise's imagination. But that make believe scenario ultimately appears to come to fruition.

As usual, the end of the episode cut to a flash-forward scene and showed the real-life version of Annalise's funeral. It's a shocking revelation, however, there's still a lot about this latest plot twist that remains unknown, leaving many fans to wonder if there's a lot more to this story than meets the eye.

Here are some of the most notable theories that have surfaced in the wake of last Thursday's premiere.

Based on the hashtag series creator Pete Nowalk has initiated (#WhoKilledAnnalise), the series definitely wants fans to think that foul play was involved. Nowalk seemed to confirm as much during a recent interview with Variety, admitting that this idea has been part of the plan all along. "I wanted to give everyone, especially Annalise, an ending that felt big," he explained. "For me the mystery of this premiere, which is Who killed Annalise? was something I wanted to do forever, but obviously you can only do it in the last season."

But if that turns out to be the case, then who did the deed? Connor, Michaela, Bonnie, Gabriel — they all have reason to hate Annalise for the lies that she's told and the things she's done, which makes this the most likely scenario out of the bunch.

Then again, there's always the possibility that Annalise's death is a complete accident. Perhaps she goes through another relapse and overdoses, but this time she's unable to be saved in time. It wouldn't be quite as dramatic as a potential murder would be, but it's definitely a viable option.

Annalise Took Her Own Life

Annalise's time in therapy seems to have helped, but she still has a long road of recovery ahead. There's no denying that she wants to get better and learn to love and forgive herself for any sins of the past, but if that's unable to happen, there's a chance she will end up taking her own life. However, considering Annalise's strong will and stubborn nature, this feels like the least likely outcome.

And last, but certainly not least, it's important to consider the notion that Annalise's fate isn't what it seems and could very well be about to execute her biggest coverup yet. What if she ultimately decides to fake her own death and start fresh somewhere new? This series is known for its shocking twists and allowing Annalise to get away with one last murder (her own) would be the perfect way to bring this journey to a close once and for all.