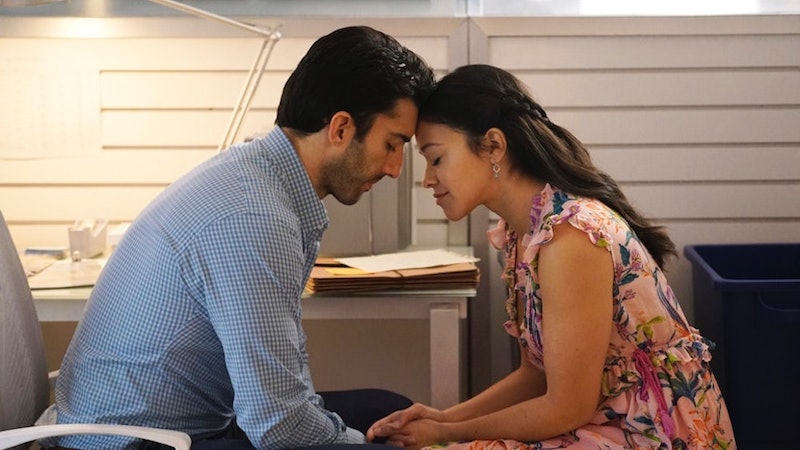 They say that all good things must come to an end, but that won't make saying goodbye to Jane the Virgin any less difficult when the show wraps up its fifth and final season on Wednesday, July 31. But since that just leaves us with a handful of episodes left, it's start seriously considering all of the theories about the Jane the Virgin series finale that are currently float out there in the universe. Because as much as fans may want to be in denial about it, our time with the Villanueva family is quickly drawing to a close.

Now that Jane and Rafael's relationship appears to be back on track, it would be easy to assume that the series conclude on a happy note, given everything these characters have already been through over the course of these last five seasons. But then again, let's not forget that Jane the Virgin showrunner Jennie Snyder Urman spoke with TVLine back in March about what would be included in the final season, and while there were certainly happy storylines, she also promised a fair amount of heartache as well. "There are deaths," she teased at the time. "It's a telenovela. People are going to have to die."

That's definitely not the most comforting thought since losing any of these characters would be downright devastating. But with this knowledge in mind, here are a few ways the series finale could play out...

Jane may have chosen Rafael, but that hasn't stopped some Team Michael fans from hoping that this epic love triangle will come into play one final time. Could Jane have a change of heart? It feels unlikely, given how adamantly she's declared her love for Rafael, but then again, it's hard to imagine Michael not appearing in the finale, so you never know...

Thanks to Urman's teasers, fans know someone is going to die at some point this season and if she really wants to hit us where it'll hurt, that means having to watch the death of a character viewers have come to know and love. Both Rafael and Xo have had cancer scares; Rogelio just recently visited the hospital due to an issue involving his heart; Michael could still attempt to bring down Rose once and for all, leaving him in danger yet again; Jane isn't the mysterious narrator, which could indicate she's no longer around to be able to tell her story firsthand. Needless to say, there's plenty of ways a tragic death could occur. It's just a question of who would most likely be on the chopping block.

Then again, perhaps this time good will prevail and Sin Rostro, who has been a major threat throughout the entire series, will finally get her just desserts and no longer be a danger to Jane's family.

Jane & Rafael Have Another Kid

Raf said that he didn't want to have anymore kids, but as the narrator pointed out, one of them ends up changing their minds on the matter. Just saying!

The Narrator Is Finally Revealed

There's been a ton of speculation as to who this person could be, but one way or another, fans should finally learn the identity of that mysterious voice.

Another Time Jump Will Be Introduced

The show has done it before, so what makes you think it won't do it again?

The Entire Series Was Just A Product Of Jane's Imagination

Then again, the series could fall victim to one more popular troupe and reveal that nothing in the series ever actually happened and it was all a fictional product of Jane's creation. Sure, it would be a little disappointing, but it's definitely a twist that no one suspects.

Ultimately, viewers will just have to wait and see if any of these possibilities come to pass, but let's face it — it'll be difficult to say goodbye to this series either way.