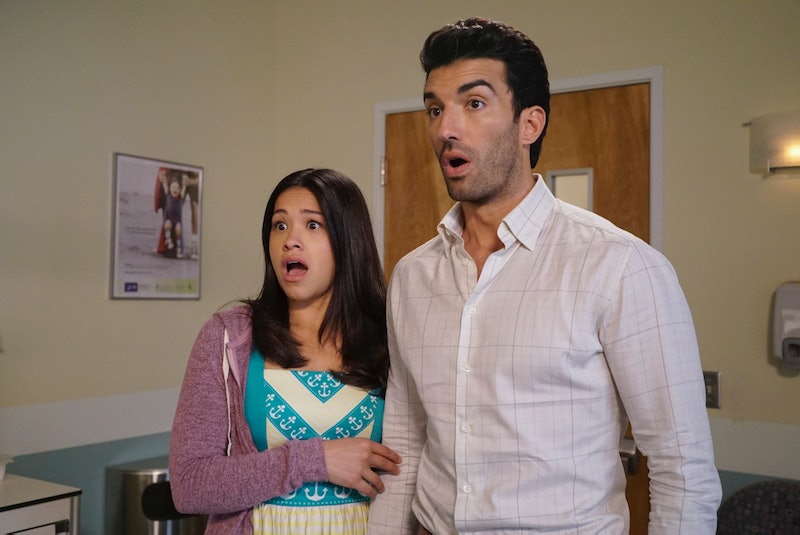 The end is nigh, friends! Jane the Virgin only has six more episodes before the series finale on July 31. With things seemingly coming together nicely for Jane and Rafael, now's the time to come up with theories about how Jane the Virgin ends. Because, as every viewer knows, a lot can go down in just minutes on a telenovela like this one — let alone episodes. And while Jane and Rafael seem all set for a big, happy wedding day in "Chapter 100," the narrator warned us in "Chapter 94" that their wedding won't go smoothly. So let the theories begin!

While showrunner Jennie Snyder Urman seems guaranteed to give fans closure during the end of Jane the Virgin, let's not forget all the bonkers events that have occurred in past season finales. Mateo was stolen by Sin Rostro after Jane gave birth to him. Michael was shot by Sin Rostro after he married Jane. Petra was held at gunpoint by Anezka at Xo and Rogelio's wedding. And Michael came back from the dead when Rafael was ready to propose to Jane. So bliss has always been mixed with the threat of death in finales on Jane the Virgin and the series ending should be no exception.

Based on photos from the last day of shooting, it looks like the finale will take place on Jane and Rafael's wedding day. So what bad thing will occur on their big day? Check out the fan theories below and be prepared to have your mind blown.