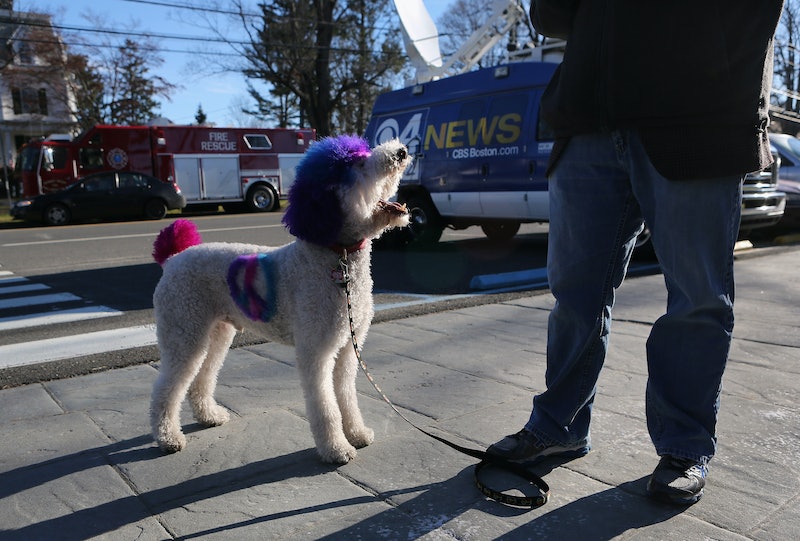 Therapy dogs are immensely valuable to people struggling with physical, mental, and life-threatening illnesses, and there's no question that they provide comfort and happiness. But now doctors are asking if therapy dogs can spread superbug germs in hospitals. Because those who are hospitalized with certain illnesses have weakened immune systems, doctors at Johns Hopkins Hospital in Baltimore were curious if therapy dogs left sick children more vulnerable to being exposed to superbugs, TIME reported.

In an unpublished study that was presented at a recent scientific meeting in San Francisco, doctors revealed the results of research involving 45 children receiving treatment for cancer and their interaction with fou different therapy dogs. The research indicated that kids who spent more time with the therapy dogs were six times more likely to have superbug bacteria on them after the interaction.

"Whether covered in fur, feathers or scales, animals have the potential to carry germs that make people sick," Casey Barton Behravesh of the Centers for Disease Control and Prevention said regarding the findings. Before you freak out that Fido is a walking superbug-germ farm, the Associated Press noted that researchers said the dogs most likely picked up superbug-germs like MRSA at the hospital itself versus actually bringing them in. Once the germs are on the dog, it's easy to spread them from patient to patient.

This relationship has been known for some time. In 2009, the New York Times reported that a previously published Canadian study found that dogs can indeed pick up and unintentionally spread superbug germs during their hospital visits when a dog visits multiple patients on its therapy trip. Basically, germs can be transferred from person to person when one germ carrier pets the dog and the dog is not cleaned before it visits the next patient.

However, the 2018 study advised that there's a simple solution — giving the dogs baths before they interact with sick patients. Think of it like hand washing for dogs. Because dogs walk on the bare floor without shoes and generally don't wash their paws between patient visits, therapy dog handlers in the second part of the new study were asked to bathe their dogs in a special shampoo before they visited the hospital. The dogs were subsequently cleaned every 10 minutes with disinfecting wipes during their visits.

Researchers found that bathing before visits and intermittent disinfecting drastically reduced the spread of bacteria between therapy dogs and patients. Additionally, one of the researchers, Kathryn Dalton, emphasized the importance of patients who visit with therapy dogs using hand sanitizer beforehand so they don't transfer germs to the dogs that can then be transferred to other patients.

The AP reported that Dalton said she hoped the study would heighten awareness about proper cleaning protocol for therapy dogs so the animals can continue to raise the spirits of hospitalized people. "I really had the opportunity to see how important these dogs were to the patients," Dalton said. "[They] would say how much [the dogs' visit] made their day."

The research also brings to light the importance of disinfecting dogs when they leave the hospital so they don't transfer germs they've picked up to their human family, or patients at another facility. While further research is warranted, these findings coupled with previous research can help better educate therapy-dog owners, handlers, hospitals, and patients about proper protocol before, during, and after visits. The bottom line? The best way for both dogs and humans to keep it clean while at the hospital is for humans to wash their hands and for dogs to wash their paws and fur.