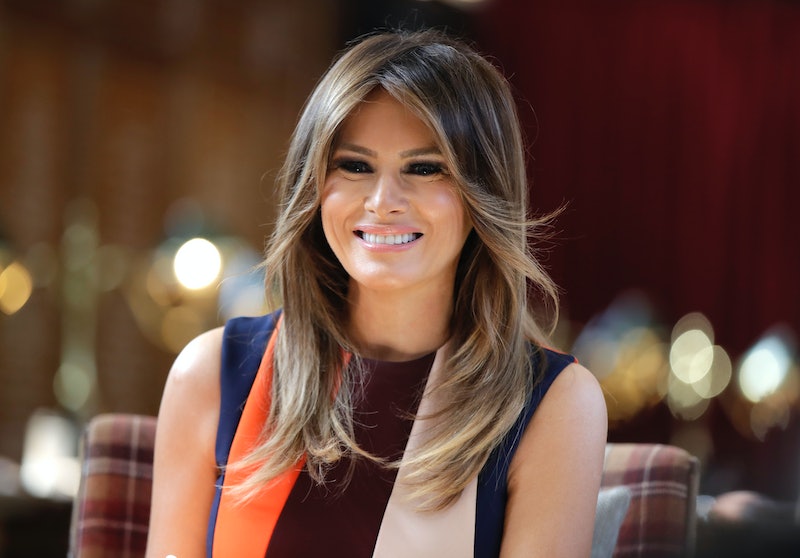 There's wine, honey, chocolate, and cake. No, this isn't a theme park gift shop, a local market, or a store at the airport hawking last-minute gifts to bring home. They're First Lady Melania Trump-themed products sold in Slovenia and her local hometown.

Reuters reported back in January that Melania was helping boost tourism in Slovenia as the country announced its fourth consecutive year of record tourism in the country. Seventeen percent more foreign tourists visited Slovenia in 2017, according to the country's statistics office. The country reported that the number of American tourists increased by 24 percent in November.

Since she became FLOTUS, Melania's home country has been using her image and titles (like "First Lady") to sell products, and having her in the Oval Office has been a boon to the country — and her hometown.

The official website for Slovenia has a special webpage for Sevnica, the town where Melania grew up. Melania-themed tours helped boost its number of visitors by 20,000 since President Trump announced his presidential campaign. "After Melania, things really changed. Now we have tourists from all over the world," Sevnica Mayor Srecko Ocvirk told the Times.

Here's some of the Melania products available for sale in Slovenia.

More like this
The 8 Best Walking Shoes For Metatarsalgia, According To A Podiatrist
By Lauren Moison
Anguilla Is The Under-The-Radar Caribbean Destination You Need To Visit
By Rachel Lapidos
TikTok’s Viral Tunacado Sandwich Is The Internet’s Favorite Lunch Right Now
By Alexis Morillo
The 8 Best Dishwasher-Safe Cookware
By Jenny White
Get Even More From Bustle — Sign Up For The Newsletter