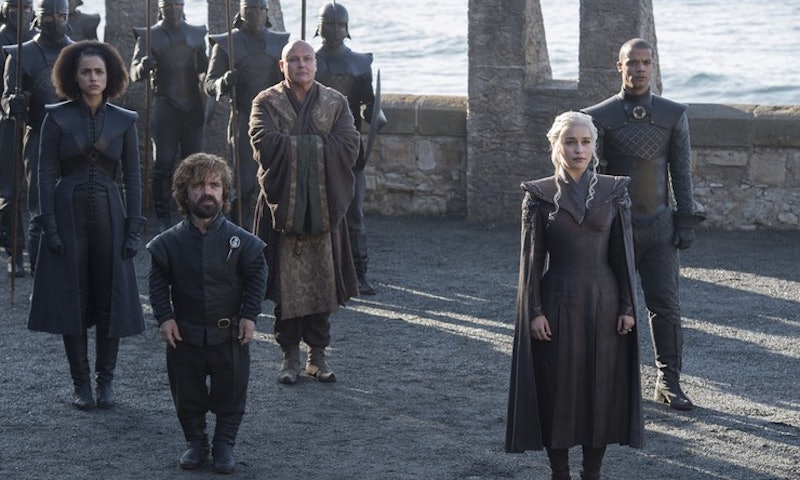 When it was announced that HBO's Game of Thrones would be ending, fans were thrown into a tizzy. (Not as much of a tizzy as when we found out that Game of Thrones had run out of canon material to follow and would be going off book, but a tizzy all the same.) Well, hold on to your butts, because George R.R. Martin revealed on Sunday that there could be a fifth Game of Thrones spinoff to go with the four that have already been announced. Sure, the writer thinks it unlikely that all five will get made, but there are scripts for five — not four, five! — spinoffs that could potentially come to screen. I understand if you need a minute.

"Decades of experience in television and film have taught me that nothing is ever really certain... but I do think it's very unlikely that we'll be getting four (or five) series. At least not immediately," he wrote on his Livejournal blog. "What we do have here is an order for four — now five — pilot scripts. How many pilots will be filmed, and how many series might come out of that, remains to be seen. (If we do get five series on the air, I might have to change my name to Dick Direwolf.)"

Now, if you ask me, the author is underestimating the mind-blowing popularity of the television series inspired by his books, and will be changing his name to Dick Direwolf sooner than he thinks. But, then again, he has a very good reason for thinking it's unlikely besides just that TV and film doesn't work as quickly as we all think it does. None of the series will be focused on current characters that we've gotten to know and love at all, apparently. These will be new and untested prequel stories.

"None of these new shows will be 'spinning off' from GOT in the traditional sense," he wrote. "We are not talking Joey or AfterMASH or even Frazier or Lou Grant, where characters from one show continue on to another... Every one of the concepts under discussion is a prequel, rather than a sequel. Some may not even be set on Westeros. Rather than 'spinoff' or 'prequel,' however, I prefer the term 'successor show.' That's what I've been calling them."

Well, OK. So, basically, we only have a limited amount of time with the characters we know now — the upcoming Winds of Winter included — and then, if the stars align, we'll be diving into a brand new world of characters. And a brand new world of places. And a brand new world of who-knows-what. Which is, you know, fine. I think we all trust that George R.R. Martin can craft a good story by now. I just don't know if spinning off into something wild and new will get us all five TV series like we want. Some of us may not like the new stories or the new directions of the shows. Maybe they're nowhere near as interesting as Game of Thrones.

Or maybe I should stop worrying. Martin seems cynical about all of these happening, which makes me want to be optimistic in response. At the very least, we've got a lot of interesting television coming up to fill the void — maybe — and that's more than we had before when it was announced that Game of Thrones was ending. Let's be thankful for small miracles, guys.