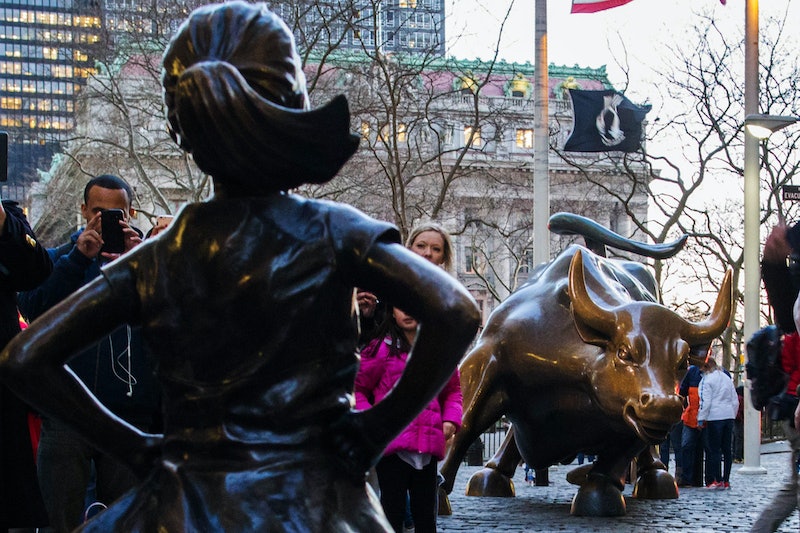 The West Coast now has its own Fearless-Girl-inspired statue in Sacramento. State Democrats revealed a bronze statue of a little girl atop their headquarters on Friday, just as the state party's convention commenced this weekend, giving the original New York "Fearless Girl" a sister.

The statue, created by artist Julia Fernandez-Pol, was modeled after Williamson's five-year-old daughter. It stands 5' 8'' and weighs 400 pounds." We wanted something that little girls can look up to," Democratic strategist Dana Williamson told NBC affiliate KCRA. "They can literally look up and be inspired."

The statue's name "Persist," which is also the party convention's theme, is derived from a quote from Republican Sen. Mitch McConnell. “Senator [Elizabeth] Warren was giving a lengthy speech,” McConnell said in February after Republicans used an obscure rule to gag the Massachusetts senator while she argued against Jeff Sessions' nomination to attorney general. “She had appeared to violate the rule. She was warned. She was given an explanation. Nevertheless, she persisted.”

The New York original, which appeared in March for International Women's Day, has drawn both support and ire. In mid-April, Sen. Warren tweeted a picture of herself with the Fearless Girl statue. "Fight like a girl," her post read.

However, some claim that Fearless Girl, which was installed by a financial services company, represents a pernicious and masculinist infantilization of female ambition — that is, that our society can only handle innocent and innocuous girls' ambitions. The desires of the grown woman, however, are threatening and unwelcome. (For example: Hillary Clinton's presidential aspirations.)

"It’s dismaying, and revealing, that this message is most easily conveyed through a figure of a girl," Jia Tolentino, wrote in The New Yorker, arguing that Fearless Girl is a poor representation of women's ambition. Fearless Girl's Sacramento-based sibling, which was funded by anonymous donations to the Democratic party, has drawn similar criticisms on Twitter.

Whether Fearless Girl and her new sister Persist fill you with pride and hopefulness or trigger your sour feelings about the corporatization of feminism, I get it. But to steal a phrase from The Handmaid's Tale, these hard, metal statues — and the feminist ideals they try to represent — won't let the bastards grind them down.