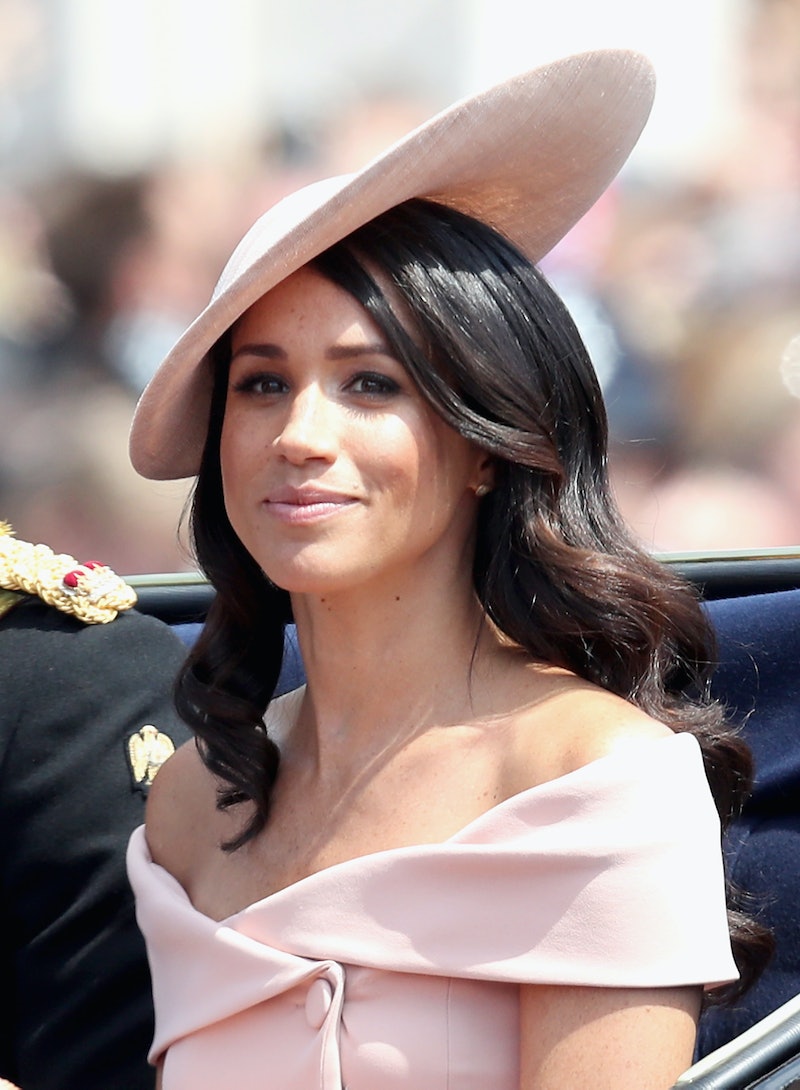 There's a new conspiracy theory making the rounds, and this time it's gotten futuristic. Has Meghan Markle been replaced by a robot? Some are asking themselves this very question after new, and incredibly lifelike Prince Harry and Meghan Markle wax figures appeared on the finale of Britain's Got Talent, sparking rumors that the new royal was actually replaced by a robot.

That's right — when the footage of the fake Meghan and Harry made the rounds after the BGT finale earlier this month, people became concerned that something happened to the real Meghan Markle. It's worth mentioning that these are no ordinary wax figures. They are part of a new Live Figures exhibit at Madame Tussauds London called Meghan and Harry LIVE, which will actually include figures resembling your favorite royals that walk around like real people.

When they appeared on Britain's Got Talent, they looked eerily like the real thing thanks to the fact that the live figures of the royals did have realistic masks on — some of Madame Tussauds' figures actually hit the mark, after all. Mask or no mask, it's a pretty hilarious theory to believe. Still, once you see the footage from Britain's Got Talent of the fake Meghan and Harry cuddling in the stands, you'll understand why people thought Meghan was turned into a robot.

In the photo of BGT, the fake version of Prince Harry doesn't look very real, but the fact that he's smiling makes his unchanging face a little more believable. Meghan, on the other hand, sits next to him with pursed lips, and the fact that she doesn't break into a smile definitely adds to the creepy-factor of the pseudo celeb-appearance. A video of the fake Markle and Harry on BGT that circulated on Twitter is even more troubling. It looked so terrifyingly real, people couldn't stop commenting on how robotic Markle looked — without realizing that it wasn't the real Meghan Markle.

Some people suggested that Sophia the Robot dressed up as the Duchess of Sussex just so she could get the royal treatment. Others have guessed that Queen Elizabeth could have something to do with the supposed switch. It's almost like each theory gets more absurd than the one before it, and the truth behind the robotic-looking Meghan is really quite simple.

Apparently, the masks that Madame Tussauds created to look like the real-life Prince Harry and Meghan Markle are realistic enough to trick a ton of people into really believing that the American actress who recently joined Britain's royal family might have actually been turned into a robot.

At the end of the day, the major confusion over Markle's figure is the perfect publicity for the wax museum, really, because in the end of June, people will really be able to see the supposed robot version of Markle in real life. The Madame Tussauds website describes the new exhibit as an "exciting innovation," that "will allow guests to feel as if they are really meeting Prince Harry and Meghan Markle in person, adding a new dimension and providing an extraordinary moment for visitors to the world famous attraction."

For now, the live wax figures will only consist of Meghan Markle and Prince Harry, and you can only find them at the London museum. It might be worth the trip across the pond though, just to curtsy in front of the Duke and Duchess of Sussex, or at least the robot-looking versions of them. (Even as creepy as the un-moving faces of Madame Tussauds' live figures are, you've got to admit that they're eerily realistic.)

As for the real Meghan Markle, Kensington Palace recently announced her and Prince Harry's first royal tour. The two will go to Australia, Fiji, the Kingdom of Tonga, and New Zealand in the fall, which is so much better than being cooped up in Madame Tussauds, where their live figures will live forever.