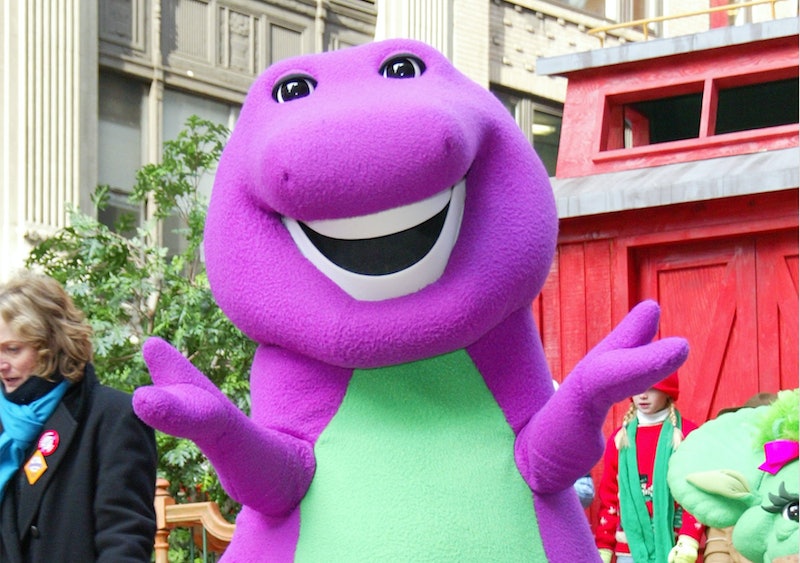 Now that the children of the '90s and early aughts are all grown up, they're finally ready to see a newer — and much darker — side of one of Barney the purple dinosaur. Get Out star Daniel Kaluuya and Mattel are making a Barney movie, in which the Oscar nominee will introduce fans to the misunderstood hero behind the lovable purple and green dinosaur. "Barney was a ubiquitous figure in many of our childhoods, then he disappeared into the shadows, left misunderstood," Kaluuya said in a statement to The Hollywood Reporter.

"We're excited to explore this compelling modern-day hero and see if his message of 'I love you, you love me' can stand the test of time," he continued. Kaluuya will also produce the film under his newly-formed production company, 59%, which the actor told Deadline in May is committed to creating "cinema that is honest, reflective, inclusive and authored."

While few details about the movie are available right now, Mattel Films' Robbie Brenner added to the impression that the upcoming Barney movie will be dark and gritty, telling THR that "working with Daniel Kaluuya will enable us to take a completely new approach to Barney that will surprise audiences and subvert expectations." He also explained that the film will be directed at adults who grew up watching Barney & Friends every day, and will "speak to the nostalgia" millennials have for the dinosaur, while also "entertaining today's kids."

Barney & Friends premiered in April 1992 as a children's show designed to teach educational lessons through songs and dance routines, most famously, the "I Love You" song that concluded most episodes. In recent years, the show has also become known for launching the careers of some of the biggest names in Hollywood, including Demi Lovato and Selena Gomez, who first became friends while working on the show as children. Though the show stopped making new episodes in 2009, The Hollywood Reporter reported in 2015 that Mattel was planning to revive Barney & Friends, with new episodes set to debut in 2017. However, that revival never made it to air, and instead, it looks like Mattel is planning to reboot Barney on the big screen.

Some fans shared their hesitations about this "subversive" new take on Twitter, where they joked about what a gritty Barney movie would look like:

Barney & Friends is far from the first of Mattel's property to get the "subversive" movie treatment. Margot Robbie is currently signed on came to produce and star in a Barbiemovie. "I think it’s a great opportunity to put some positivity out in the world and a chance to be aspirational for younger kids," Robbie told People in July about her Barbie movie. That same month, it was announced that Lady Bird director Greta Gerwig and Noah Baumbach will write the film, which seems to also hint that this too, will be a subversive take on the traditional Barbie mythology.

While it still remains uncertain whether the upcoming Barney movie will follow in Barbie's footsteps and be a fun, unexpected take on the traditional mythology, or a full-blown gritty reboot that explores the "misunderstood" side of the purple dinosaur, it's clear that Mattel is thinking outside of the box when it comes to finding new ways for adults to connect with the properties they loved as children. And really, it was just a matter of time before "The I Love You Song" got a creepy, intense update for the big screen.