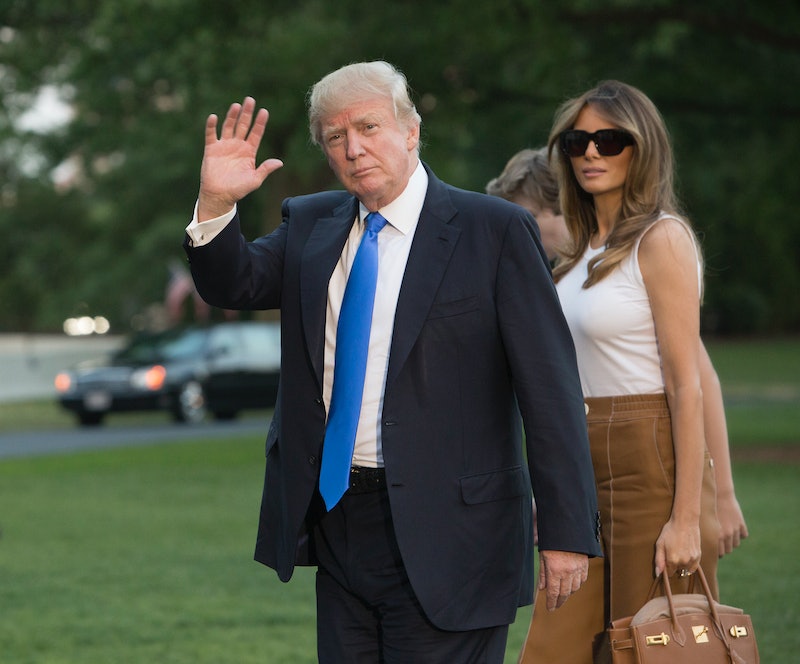 On Thursday, First Lady Melania Trump tweeted a birthday card in honor of President Donald Trump's birthday. OK. But if you look closely, there appears to be a stain on Melania's birthday card to Donald — right there, between "Birthday" and "Mr. President." Nobody has been able to figure out exactly what the mysterious marking is, but of course, that hasn't stopped the internet from trying.

The card that Melania posted is simple: "Happy Birthday Mr. President," it reads. There's also a presidential seal on the top of the card, which is a tad confusing because that seal is generally used at the top of communications that come from the president, not to the president, so at a first glance, it looks like Donald was sending himself a birthday card. Other than that, though, there's nothing terribly notable about Melania's birthday card... except for that stain.

It's very, very small. If the card was a physical object, one might imagine the stain to be roughly the size of the period at the end of a sentence. But the card was made digitally. The marking is a brownish-yellow and doesn't seem to have a uniform shape, nor a uniform distribution of color. But what is it?!

Initially, one might think that it's a stylistic marking meant to give the card a realistic look. But that can't be it, as the stain is a different color from everything else on the card. Some theorized that it's a drop of coffee that accidentally fell onto the card, and while that's possible, the armchair detective work didn't stop there. One popular theory: A teardrop.

Some hypothesized that there's a hidden message in the stain...

...while others theorized that perhaps Donald himself had a hand in making it, so to speak.

And of course, there's also the suspicion that maybe it was not a drop of coffee, but a different substance.

Of course, the source of the mysterious stain isn't really worth worrying about. But some of the reaction to this no doubt stems from the common speculation that perhaps Melania and Donald aren't really all that close. When he tried to hold her hand during his recent trip to the Middle East, she swatted it away, and she seemingly rejected his hand again during a trip to Italy. And Melania didn't even live in the White House for the first five months of Donald's presidency.

More like this
How To Curl Your Hair With Leggings, According To TikTok
By Carolyn Steber
Ashamed Of Your Screen Time Stats? Here's How To Change That
By Alexis Morillo
Learning To Love, Not Judge, The Lunchbox Wives Of TikTok
By Esther Zuckerman
This Wordle Rival Is Taking Social Media By Storm
By Sam Ramsden
Get Even More From Bustle — Sign Up For The Newsletter
From hair trends to relationship advice, our daily newsletter has everything you need to sound like a person who’s on TikTok, even if you aren’t.