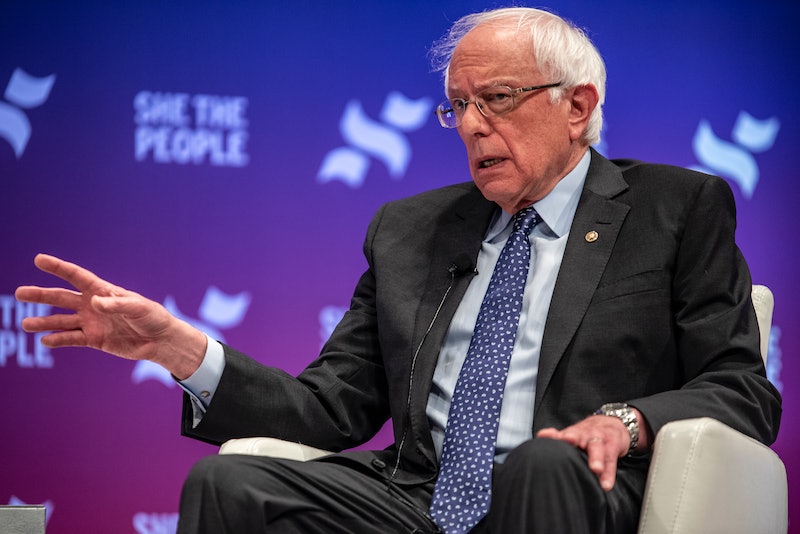 Bernie Sanders has been in politics for a while now, which means that he's spent a lot of time in front of a camera. Long before the days when he launched himself into the center of national politics, however, Sanders essentially used his own proto-reality TV show to establish himself as a media presence in the town of Burlington, Vermont, where he was the mayor, as Politico discovered. While going through the many hours of film that Sanders and his team created, you'll even find video of Bernie Sanders telling kids about the dangers of drugs — all the way back in 1987.

First, though, let's set the scene. Imagine a 45-year old Sanders, who basically looked like the 77-year old Sanders but with a slightly fuller head of hair and thick-rimmed glasses. He's sitting on a picnic table, surrounded by kids of all ages at a summer camp. He's talking to them about problems in their community, like housing and jobs — and then he turns to the meat of the conversation, just after 15:30 in the YouTube video.

"Does any of the older kids that you know have a problem with drugs, occasionally?" Sanders asked the kids in the video unearthed by Politico, to a mixed chorus of yeses and nos. "Who wants to talk to me about that one? What about that, is that a problem?"

"Who said they like coke?" Bernie said, handing his microphone over to the boy who volunteered himself. After the kid specified that it was Coca Cola that he like, Sanders turned the conversation towards a different direction.

"Alright, but who knows about cocaine? Anyone ever seen cocaine?" Bernie asked, again to the group of kids answering both yes and no.

After covering the dangers of cocaine, Sanders then went on to discuss why people choose to do drugs, what cocaine does to the mind, and how smoking cigarettes is not "smart."

"One of the things that really bothers me is that sometimes kids think it's really cool to smoke," Sanders told the kids. "It's a waste of money and it's not very smart."

Nowadays, when Sanders talks about drugs, he's generally referring to prescription drugs and how they should cost less. According to his campaign website, he takes progressive stances on drug policy: marijuana legalization, treatment rather than jail time for nonviolent drug offenders, and an end to the so-called “war on drugs,” which his website refers to as "a failed policy."

In 2019, though, the video quality is significantly better than what Sanders had available back in 1987, and his message is far more scripted. Rather than a local cable station, Sanders — along with the many candidates who he's running against in the 2020 Democratic primary — has his social media pages, where he can reach millions all at once. Not all of those candidates have material dating back to the 1980s, though — so now that they videos are back out in the open, his supporters and opponents will all have access to them, for better or for worse.