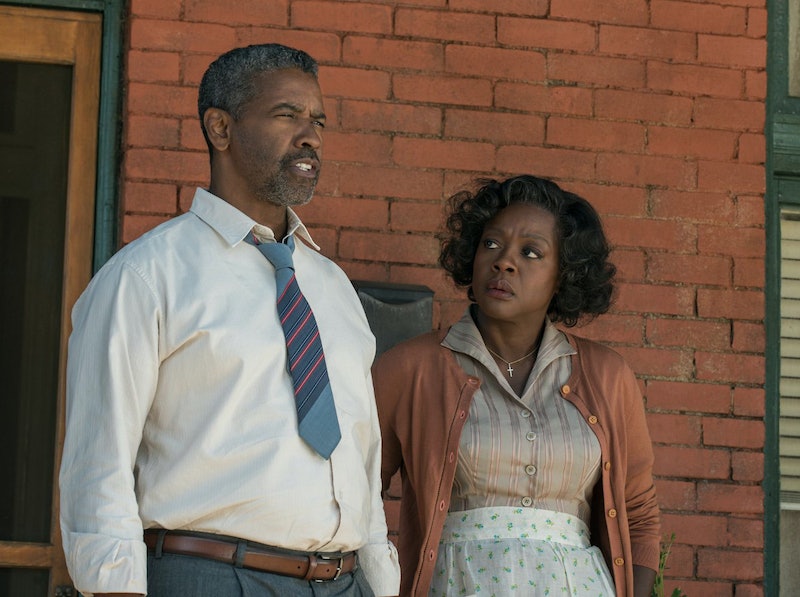 The reason that the Golden Globe Awards aren't always the most reliable predictor for the Academy Awards is because they separate the top category into two genres — Drama and Musical or Comedy — allowing the chance for multiple Oscar frontrunners to emerge victorious. That seems likely to be the case at this year's ceremony, since La La Land has been relegated to the Musical or Comedy category, where it won't be forced to compete against its fiercest competitors, Moonlight and Manchester By The Sea. Thus, the outcome won't necessarily help clarify what is quickly becoming a very heated race for Best Picture. But thankfully, these 2017 Golden Globe Drama winner predictions can help clarify things in a lot of other competitive categories.

With La La Land sewing things up on the Musical or Comedy side of the film awards and FX's freshman series Atlanta seeming likely to dominate the Comedy side of the TV awards, there's not too much mystery on that half of the Golden Globes telecast this year. The Drama field is definitely where the action's at this year, so let's break these 10 categories down one-by-one. (For purposes of these predictions, we'll consider the Supporting categories — which don't distinguish between genres — as well, since 90 percent of their nominees are from dramas anyway.)

Whichever film wins here will still have to go toe-to-toe with La La Land at the Academy Awards, but at least this category will help clarify which of that movie's two closest competitors will head into the Oscar race in second place. Ideally, it should be this tender coming-of-age indie, which shines a rare light on an underrepresented demographic: young, queer black men. Moonlight has won virtually every critics prize out there, and its conquest should continue with the Hollywood Foreign Press Association.

Could win: Manchester By The Sea

That being said, Manchester — with its straight white male protagonist — would be a much more traditional choice for the top prize, so don't be too surprised if voters hew closer to the expected than the revolutionary.

Will win: Casey Affleck, Manchester By The Sea

As a man coping with almost unbearable grief and guilt, Ben Affleck's younger brother has been on an unstoppable path to Oscar gold — a path that will likely continue with the Golden Globes. Especially if the HFPA passes over Manchester for Best Picture, expect them to honor the film itself by awarding its leading man.

Of course, if anyone can stop Affleck's unstoppable path, it would be one of the most respected actors in Hollywood. Washington's adaptation of August Wilson's Fences (which he directed after winning a Tony for the same role on Broadway) is a powerhouse of acting, and it's easy to imagine the HFPA making the race more interesting by swaying the needle in Washington's favor.

Once again, a complicated Oscar race is simplified by the fact that its two frontrunners — Portman and La La Land's Emma Stone — are competing in different categories here. That should pave the way for an easy victory for Portman, whose performance as a grieving Jackie Kennedy has been earning raves all season.

Of course, the Golden Globes are decided by the Hollywood Foreign Press Association, so an upset is possible if they decide to give it to Huppert (often referred to as "the French Meryl Streep") for arguably the most acclaimed performance of her career.

Ali has remarkably little screen time for an awards frontrunner, yet his performance as the protagonist's drug dealer father figure in Moonlight has been racking up accolades left and right. A Golden Globe would be the perfect cherry on top of a wonderful year for Ali, which included an Emmy nomination for his role on House Of Cards and a memorably villainous turn on Marvel's Luke Cage.

If Ali's screen time turns out to be too slight for voters, they could go instead with this well-respected Hollywood mainstay, who turns in a hilarious and poignant performance as an aging cop in this timely modern-day Western.

Have you seen Fences? If you have, you know no one else is winning this award other than the Emmy Award-winning star of How To Get Away With Murder, who holds her own — and then some — against her domineering co-star.

Could win: Michelle Williams, Manchester By The Sea

Unlike Davis, Williams is barely in her movie at all, appearing in only a small handful of brief moments… but in one three-minute scene towards the end of the film, she absolutely steals the entire thing thanks to a gut-wrenchingly vulnerable speech that will leave you in tears.

Will win: The Crown

This is without a doubt the most challenging category of them all to predict this year. The Golden Globes are notorious for awarding splashy new shows (see last year's wins for Mr. Robot and Mozart In The Jungle), but fully four of the five nominees in this category are splash new shows. The HFPA could conceivably give it to This Is Us, which finds its home on the same networks as the Globes telecast, as a way of awarding broadcast television after years of ignoring it in favor of cable and streaming shows. Or they could give it to Westworld, for being the buzziest new show of the year and the potential "next Game Of Thrones." Or they could give it to Stranger Things if they were enchanted by its '80s nostalgia as everyone else in the world.

But my gut tells me the HFPA will ultimately go with The Crown; it's a perfect storm of awards-worthy ingredients: a period drama about a foreign country with timely political themes, lavish production values, and British accents. The same phenomenon that kept Downton Abbey an Emmys favorite for its entire run could lead the new Netflix series to a victory here.

Could win: Game Of Thrones

Can you believe that Game Of Thrones has never won a Golden Globe? The HFPA rarely awards shows for the first time once they're deep into their runs, but if the HBO fantasy series can't win for arguably its best season yet — including the epic Battle of the Bastards and that fiery season finale — then it probably never will… and that's simply unimaginable.

Although they awarded his series and his Supporting co-star Christian Slater last year, the HFPA failed to recognize Mr. Robot's astonishing leading man, choosing Jon Hamm for the final season of Mad Men instead. (Understandable.) Voters might choose to make up for that oversight this year by giving Malek a delayed trophy for his captivating performance as a mentally troubled revolutionary.

But we should never underestimate the draw of sheer star power at the Golden Globes. Though this Amazon legal drama is easily the least buzzy of all the shows in the category, that won't stop the HFPA from voting for Thornton if they want to see him get up on stage and give a speech.

Will win: Claire Foy, The Crown

If The Crown does take Best Drama Series, then expect voters to follow suit and give Best Actress to its leading lady as well; typically the show that wins the top prize has to have at least one acting award to its name as well. The last time a series won Best Drama without one was when Mad Men won for the third time in a row back in 2009.

See: everything I said about Billy Bob Thornton… plus the addition of a comeback narrative, which is always hard for voters to resist.

The Ryan Murphy miniseries proved itself to be an Emmys magnet last year, and Brown should repeat his win for his performance as Chris Darden right alongside co-stars Courtney B. Vance and Sarah Paulson, who should take home trophies in the Limited Series category as well.

Could win: John Lithgow, The Crown

Lithgow was almost unrecognizable in his nigh-on-grotesque portrayal of the British Prime Minister, and voters always appreciate an actor who completely disappears into their role. Depending on exactly how fond the HFPA is of The Crown, they could potentially sweep it to another win in this category as well.

It's hard to imagine that the biggest new series of the year would go home empty-handed; so if Westworld falls short in the Drama Series and Lead Actress categories, voters might make sure to award it here. And it wouldn't be a consolation prize, either; Newton's performance as increasingly self-aware host Maeve was arguably the single best thing about Season 1.

Could win: Chrissy Metz, This Is Us

Let's be honest: Lena Headey should roast her competition for the look on Cersei's face alone, as the Sept of Baelor exploded into flames in the Season 6 finale. But it's hard to watch This Is Us and deny Metz's appeal; and voters might not be able to, either. She delivers an achingly honest performance as a woman struggling with her weight; and her chemistry with her co-stars — especially Justin Hartley as her twin — is delightful.

Find out who will take home the gold when the 74th annual Golden Globe Awards are broadcast on NBC this Sunday, Jan. 8 at 8:00 p.m. ET, hosted by Jimmy Fallon.