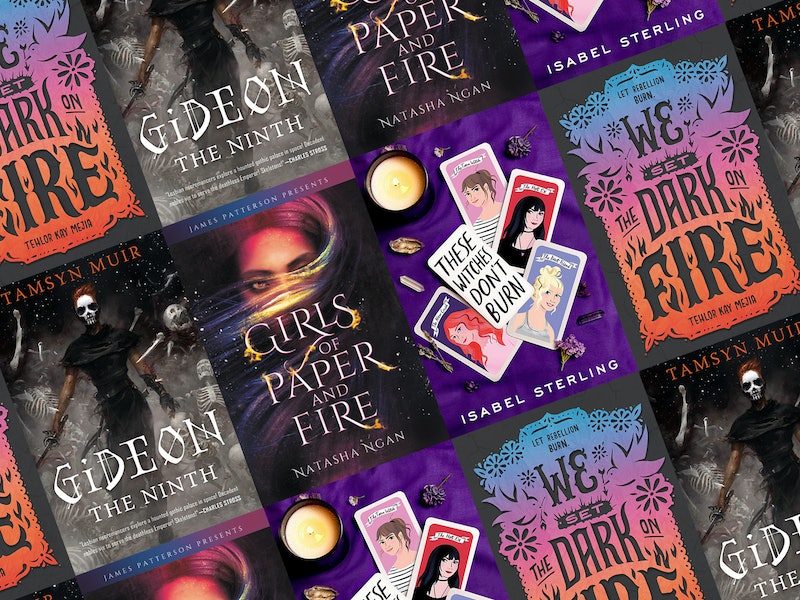 Muir considers it an overt marketing of the book's women-loving-women (WLW) content.

"It would be hard to be MORE overt," she tells Bustle in an email.

Muir is one of many fantasy and science fiction authors publishing #OwnVoices WLW stories today. (The #OwnVoices hashtag signifies that the author shares the identity of a character in their book.) Modern-day literature featuring romances between women can be largely split into two categories: stories in which WLW relationships are accepted in society, and those in which women who love women are punished for their similar-gender romances.

Muir's Gideon the Ninth falls into the first category, as does Isabel Sterling's These Witches Don't Burn. In the second category are novels like Tehlor Kay Mejia's We Se the Dark on Fire and Natasha Ngan's Girls of Paper and Fire. Bustle reached out to all four authors to find out more about their experiences writing and reading WLW fiction.

Fiction that centers on romantic relationships between women and other people of similar genders has been around for some time. The Greek poet Sappho wrote poems about romantic relationships between women in the sixth and seventh centuries BCE. Books featuring coded romances between women, such as Joseph Sheridan Le Fanu's Carmilla and Henry James' The Bostonians, have been popular since the late 19th century, a time when women could live together — in "Boston marriages," a term taken from James' novel — without men, and without suspicion of sexual activity.

The publication of Radclyffe Hall's 1928 lesbian novel, The Well of Loneliness, opened English-speaking society's eyes to the possibility of sexual attraction and romance between women in these arrangements, however, and 20th-century WLW fiction soon transformed into a series of cautionary tales and pulp erotica. Those stories had an impact on the authors of today's WLW fiction.

"Teenaged me was convinced lesbianism was characterized by suffering," Muir tells Bustle. "And not just any suffering: boring, frumpy suffering.

"I wrote Gideon the Ninth for my 17-year-old self," she continues. "I wrote a world where casual homosexuality — with a focus on casual lesbianism — could happen without comment, censure, or worry about being caught."

Tying WLW representation in fiction to the discovery of their own sexualities, Mejia and Ngan stressed the importance of diverse books in the lives of young, queer women.

"I was reading my way through the very small YA section at my local library," Mejia says. "So I didn’t know it was queer when I started [reading Sara Ryan's Empress of the World], and it ended up being a huge part of figuring out my identity as a young teen."

"I have only recently in my late 20s felt confident in embracing my queerness," Ngan says. "Reading is always the way I've made sense of the world, and myself in it."

Ngan, who was 21 when she first found similar-gender romance in Malinda Lo's Huntress, tells Bustle that "the lack of exposure to f/f relationships in books is part of the reason it took me so long to understand my own sexuality."

"I have only recently in my late 20s felt confident in embracing my queerness," Ngan says. "Reading is always the way I've made sense of the world, and myself in it — this is particularly true of when I was a teen and more socially anxious. Without any f/f representation in books growing up, I didn't have a context for my own attraction to women."

For Sterling, the realization that she might not be straight came, not as she read fiction, but as she wrote her WLW debut, These Witches Don't Burn. In an essay published by Bustle earlier this year, Sterling confesses that, even when she "finally acknowledged crush-like feelings on another woman," she still "couldn’t quite claim the queer label for myself."

"I was scrolling through my Twitter feed in an attempt to avoid facing the very queer novel I’d finished the month before," Sterling writes. "I stumbled upon a personal essay about one woman’s experience with bisexuality, and as I read her story, something inside — something fed by three years of fictional exploration and hundreds of thousands of carefully crafted words about queer characters — finally clicked."

The four writers Bustle spoke with all expressed a desire to write stories for girls and women like themselves. For some of them, to write stories with positive depictions of similar-gender romances is to offer queer readers a place to get away from the homophobia of Western society.

"Queer teens already go through so much," Sterling says. "I wanted my book to be a place where they could escape from the harshest parts of the homophobia in our current society. I wanted to create a reading experience where queer girls got to be out and proud, where they could focus more time on whether the cute new girl liked them back... rather than on coming out."

'Girls of Paper and Fire' by Natasha Ngan
Amazon

For Muir, the target audience was even more personal. "The WLW stories I grew up with," Muir says, "are the stories of women who were sad, died of lesbianism, and lived marginalized, dowdy existences where they had struggled through trauma and sort of... existed, as a victory status."

The other authors weren't searching for some sort of cruel realism, however, when they put resistance in the way of their characters' romantic bliss. Rather, Mejia and Ngan write stories in which women of all sexualities bear the brunt of attacks on self-direction.

In Mejia's We Set the Dark on Fire, all marriages are arranged, and each features two wives and one husband. The protagonist, an immigrant named Daniela, makes a good match by marrying the son of a prominent political figure, but her already tenuous position in society becomes even more threatened when she finds herself falling in love with her husband's other wife.

Discussing the position of women who love women in her novel, Mejia notes that "all romance," not just relationships between women, "is forbidden in the world of We Set the Dark on Fire," adding that she "wanted to explore what true romance is like in a world where relationships are commodified, and where the act of choosing who to love and how to love for yourself are rebellions in themselves."

Similarly, some cultures in Ngan's novel accept romantic attachments between women, but those are not the societies in which her main characters live. As in Mejia's debut, the sexual politics of Girls of Paper and Fire boil down to unequal power dynamics, with the added lens of racism.

"Lei and Wren's relationship is forbidden not just because they are women," Ngan tells Bustle, "but because they are women who belong to the King. They are his concubines, and thus exist only to serve him. The way they fall in love and reclaim their sexual agency is a direct rebellion against the King's and all male demons' power. So it's to do with power imbalances not just of gender, but of race, too."

Although publishing has given authors the opportunity to tell stories in which queer women and girls can see themselves reflected, LGBTQIA+ literature continues to receive pushback from conservative and bigoted publics. Of the 11 most challenged books in 2018, six titles — Alex Gino's George (No. 1), Jill Twiss and EG Keller's A Day in the Life of Marlon Bundo (No. 2), Raina Telgemeier's Drama (No. 5), Mariko and Jillian Tamaki's This One Summer (No. 7), Gayle E. Pittman and Kristyna Litten's This Day in June (No. 10), and David Levitan's Two Boys Kissing (No. 11) — featured LGBTQIA+ characters and themes. In October 2018, a religious activist in Orange City, Iowa burned four library books with LGBTQIA+ themes, and was later ordered to pay $125 in fines and court fees.

'We Set the Dark on Fire' by Tehlor Kay Mejia
Amazon

Earlier this year, author Malinda Lo compiled statistics on the state of LGBTQIA+ representation in YA literature since the publication of her 2009 WLW novel, Ash. According to Lo's findings, 2018 marked a high point for queer representation in SFF, with more than one-third of the total LGBTQIA+ YA novels coming from the sci-fi and fantasy genres.

Because Ash centered on a cis queer girl protagonist, Lo's report tracks the prevalence of cis queer girls in YA fiction. Books about queer cis girls made up more than half (51.85%) of all LGBTQIA+ YA novels for the first time in 2018, according to Lo.

"Reading books with queer girls and women is a warming reminder that we exist and that we deserve to have the same kind of adventures as everyone else."

The increased presence of WLW characters in fiction means something to readers who have a hard time finding reflections of themselves in other media.

"There's something so affirming about reading... WLW fiction," Sterling tells Bustle. "Even as an adult, it makes me feel seen and acknowledged in a world where we are so often forgotten and erased. Reading books with queer girls and women is a warming reminder that we exist and that we deserve to have the same kind of adventures as everyone else."

Queer representation in mainstream YA fiction is still so rare that it's still necessary to chart its rising and falling with each passing year. Ngan tells Bustle that she has "readers, women of all ages and backgrounds, thanking [her] for writing a f/f story... that wasn't for titillation or based on some male fantasy view of lesbians, but one that was by a queer women for queer women."

"And while I'm forever grateful for their words," she adds, "it does make me sad that this is something I have to be thanked for. I only wrote a simple love story between two people. I hope that in the future we have so much LGBTQIA+ representation in books that readers won't have to thank an author for making them feel seen — or if they do, it won't be a rare occurrence."

That's not to mention that, when discussion turns to queer representation in fiction, it often isn't talking about the presence of QTPOC (queer and trans people of color) characters. Although Mejia says that she is "very lucky that [other writers] opened the door for books like mine," she notes that her "queer Latinx characters were much harder to find a home for" than their white counterparts. Similarly, Ngan tells Bustle that she "had many interactions with publishers which more than suggested that if the book were 'less diverse' we would have an easier time getting a deal."

For Sterling and Muir, the road to publishing has been much smoother. "I've been lucky to have a really wonderful debut experience," Sterling says. "I've personally never had any pushback about the WLW elements in my books, and I've been really pleased with how this whole debut year has gone."

"I can happily say that none of my close WLW-publishing friends have had any pushback whatsoever," Muir says. "In my part of the industry, in my genre, I have never fought [to publish WLW fiction]. I think that's wonderful. I could not have imagined that in my early 20s."