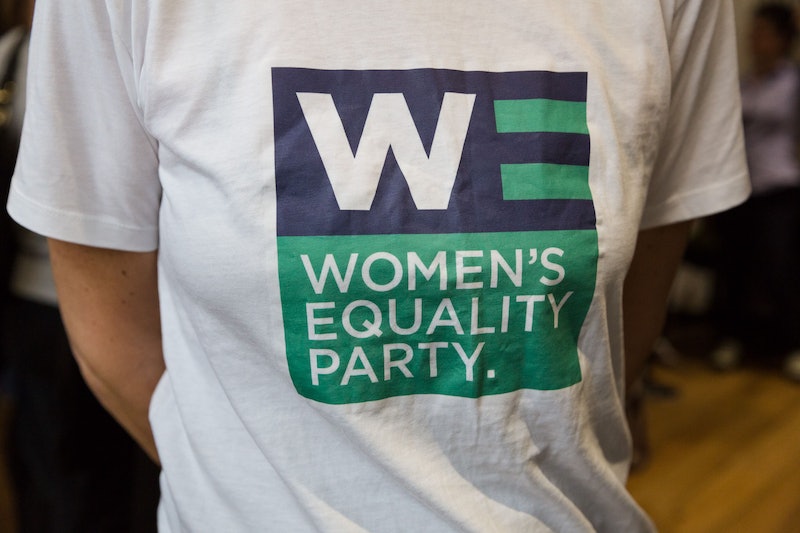 British politics is all over the place, but rumours of a soon-to-be called general election are widespread. The Women's Equality Party (WEP) is determined to see that no person who is alleged to have mistreated women wins a seat in Parliament. So it's putting up five women to stand against five MPs accused of assault and harassment. Each of the women have survived some form of sexual assault.

“As long as they continue to influence legislation that affects the lives of women and girls across the country, we cannot hope to create a more equal future or one that is free from violence,” Jenn Selby, the WEP candidate for Cities of London and Westminster, told the Guardian.

Selby, a former editor at the Independent, will stand against Conservative MP Mark Field in the next election. In June, Field was suspended from the Foreign Office after manhandling a female Greenpeace protester. He apologised in a statement given to the Mirror, saying he thought the woman "might have been armed." When Boris Johnson took over, Field lost his job as a minister, though remains an MP. An investigation into his conduct was dropped, reports the Guardian.

Labour MP Kelvin Hopkins will be contested by Serena Laidley in the Luton North area. Per the Guardian, he has been suspended by the party since November 2017 while investigations into sexual harassment allegations take place. Hopkins has denied the allegations.

Three more MPs will face as yet unnamed WEP candidates. Dover's Conservative politician Charlie Elphicke was charged with three counts of sexual assault. Earlier this month, he appeared in court to deny all charges, reports the BBC, and chose a crown court trial.

Ivan Lewis, an independent MP for Bury South, quit the Labour party at the end of 2018 over a sexual harassment investigation, per the Independent. He denies any wrongdoing. And Jared O'Mara, former Labour MP for Sheffield Hallam, was accused of sexual harassment by a 20-year-old employee, revealed the Times.

In a statement, O'Mara admitted telling the woman he was in love with her, adding: “The messages I said were not of a sober or rational mind and felt like an out of body experience when I sent them, but I know that does not excuse my actions... It was my lowest point and I will be apologising personally to her and her family." Last month, the BBC reported he had been arrested on suspicion of fraud. He was expected to leave his parliamentary role but has now postponed the resignation.

The WEP candidates are standing in protest, and as the Guardian reports, they know they are unlikely to win. Leader of the party, Mandu Reid, has said they will stand down if other parties accept the WEP's policy demands, including funding for services supporting female victims of violence and abuse and giving constituents the power to remove MPs if an independent third party finds them guilty of violence or sexual harassment.

“All of us have stories to tell, all of them quite brutal and unjust, and we’re standing against men who have not been held to account,” Selby told the Guardian. She says she was raped in 2013 but had her court case thrown out due to a low chance of conviction. After leaving her editor job, she helped set up a women's rights campaign in India and has worked on anti-violence initiatives.

Laidley, too, told the Guardian she was raped. The alleged assault occurred when she was just 16, after which she entered an abusive relationship. Now, she works part-time as a secondary school teacher, leading programmes that aim to teach about empowerment and respect.

“I’m still nervous," she admitted to the paper. “I thought: ‘Why me?’ But then a voice said: ‘Why not me?’ Let me be that mouthpiece and let me champion women and girls who are so afraid to speak up and be that representation.”