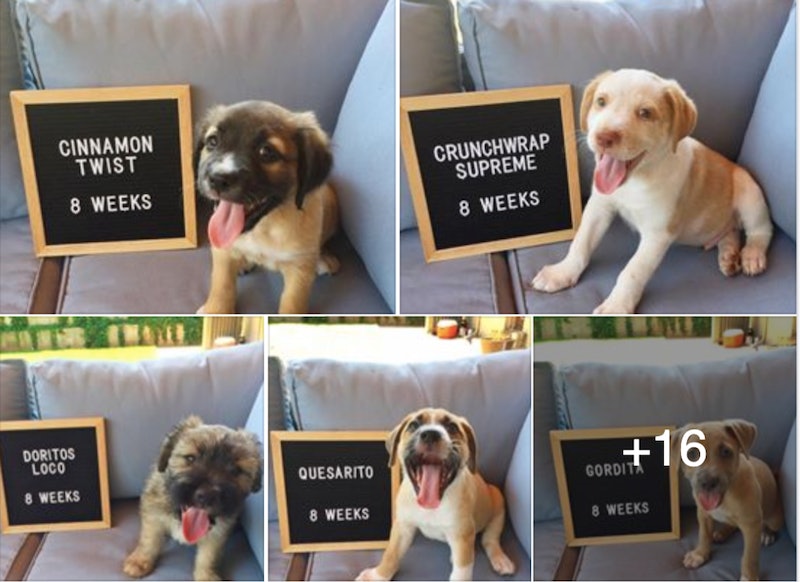 In “sometimes the internet is good and perfect” news, there are adoptable puppies named after Taco Bell menu items. You could be the proud pet parent of a puppy named Quesarito. If that doesn’t melt your nacho cheese-covered heart, I do not know what will.

Blessings and endless gratitude to Oklahoma City’s KOCO News for sharing the fast food-adoptable puppy mashup I did not know I needed. A few months ago, Ally Turley Young and her husband volunteered to foster a dog, as she said in a Facebook post. Soon, they learned the dog was pregnant and within a few weeks, they had a new litter of puppies. Because they’d nicknamed their foster dog “Taco Belle” they figured it’d only make sense to follow suit with her puppies.

The eight puppies are named — do you need to sit down? Grab some water or a tissue? — Cinnamon Twist, Crunchwrap Supreme, Doritos Loco, Quesarito, Gordita, Chalupa, Bellegrande and Fiesta Potato. Think of all the nicknames! D Lo. ‘Rito. Lupa. Tato! Fi-fi! Crunch!!!

As of Tuesday, three dogs (Quesarito, Chalupa, and Fiesta Potato) had already been adopted and five pups (Gordita, Bellegrande, Cinnamon Twist, Crunchwrap, and Doritos Loco) were still looking for forever homes. Based on the adoption website only a couple of the dogs are still available for adoption. These Taco Bell items only available for a limited time! You better hurry your heiney over to Oklahoma City if you want a terrier mix named Doritos Locos.

What’s amazing about dogs (and cats and all pets for that matter) is that you can name them literally anything. You want a beagle named bagel? Hi, hello, who doesn’t. You think Pancake is a good name golden retriever? You would be correct in that assumption. Should you give your St. Bernard the name “Spaghetti” or “Pizza”? Why not both. C’mere, Spaghetti Pizza! My dog was given the name Ava by her previous owners. It’s a fine and good name, but do you know what makes the name even better? When I tell people it’s short for Cavatappi.

The Country Roads Animal Rescue website, where all remaining puppies are listed, has other adoptable pups with some pretty choice names. There’s Hugh Jackman, an adult shepard mix who I’m assuming would respond well to the Les Mis soundtrack. There’s Kim Kay, an Anatolian Shepherd/American Pit Bull Terrier Mix with bright blue eyes, who I’m going to assume is named after Ms. Kardashian West. There is even a pit bull terrier named Handsome Jimmy which opens doors do another realm of dog names. Adding an adjective before a human name makes for a perfect pet name. Imagine a pug named Pretty Steven! A chocolate lab named Stinky Lucy! A bloodhound named Happy Dave! Again, you can name your dog quite literally anything!!!

You may have noticed that the puppies each look pretty different. “We also found out that a litter can have multiple dads,” Young wrote in her post, “and we have quite the range.” This phenomenon is due to something called superfecundation.

“Superfecundation occurs when a female mates with two or more males,” Donald Shellenberger, DVM of VCA Smoketown Animal Hospital in Lancaster explained to Dogster.com. “One litter can potentially have multiple fathers as long as they all mate with the female in the optimum time of conception.” Hence, some of the Taco Bell dogs are listed on the adoption site as “Wirehaired Fox Terrier Mix” while others are listed as “Wirehaired Fox Terrier/Airedale Terrier Mix.”

All of the puppies are incredibly adorable and, I cannot stress this enough, named after Taco Bell menu items. If you’re looking to adopt a dog, there are plenty of pups looking for forever homes ready and waiting for you. Your very own Pico de Gallo could be waiting at a local shelter right now.