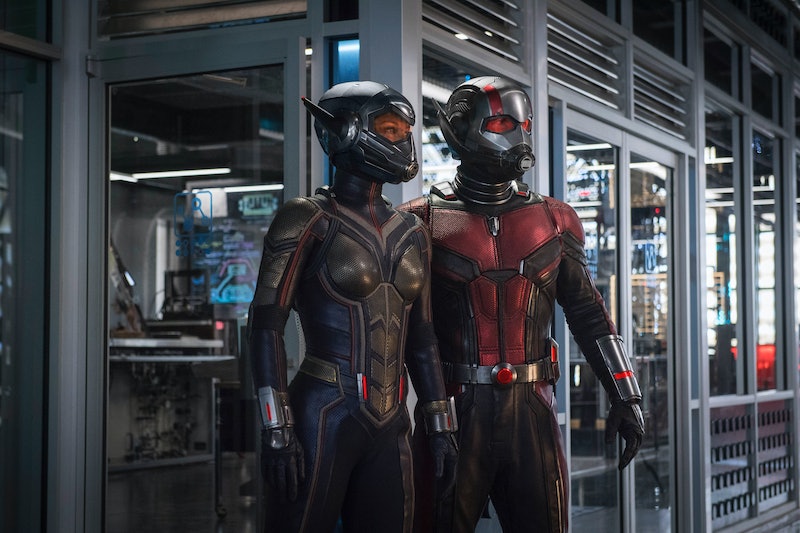 Major spoilers ahead for Ant-Man and The Wasp. When Avengers: Infinity War premiered earlier in 2018, fans of Scott Lang aka Ant-Man (Paul Rudd) were wondering why the quick-witted, bug-sized superhero wasn't in the movie at all. Eventually, someone in Infinity War mentioned that Scott was in hiding after the Sokovia Accords, which got the rumor mill started with theories as to what exactly Ant-Man was doing during the whole battle with Thanos thing. And now that we know exactly what the hero was up to, it's time to start coming up with Ant-Man theories for Avengers 4 that discuss how the events of Ant-Man and The Wasp will affect the plotlines of the next big Avengers movie.

Most of Ant-Man and The Wasp takes place in the time before Infinity War, and the timelines only catch up at Wasp's end. So in the time before Iron Man, Thor, Captain America, Black Widow, Black Panther, Spider-Man, and the rest of the Avengers gang went to go fight Thanos, Ant-Man is on house arrest. Confined to his apartment with an ankle bracelet, Scott is basically waiting around to fulfill his sentence in order to not be sent back to prison. He spends a lot of time with his daughter, Cassie, but sadly he can't leave the house. Of course, he gets lured back into the Ant-Man life when The Wasp (Evangeline Lilly) comes calling and pulls him into a fun adventure to save her mother from the Quantum Realm.

Knowing what happens in Ant-Man and The Wasp, fans can come up with a few theories as to what might happen in Avengers 4, and how the team's new discoveries about the Quantum Realm and more might make a major difference. A big part of Wasp focuses on the alternate, sub-atomic dimension where space and time are irrelevant. In the first Ant-Man movie, Scott got stuck there for a short time even after many warnings from Hank Pym, the inventor of the shrinking particle tech. But in the new film, Hank has pretty much perfected the technology, and has almost nailed down a way for humans to travel to and from the Quantum Realm using a giant machine that resembles the Large Hadron Collider.

Avengers 4 is definitely going to need to include some sort of time travel in order to undo Thanos' destructive act, the wiping out of half of the population of the universe. With Hank and Hope's new invention and their ability to access the Quantum Realm, there's a definite possibility that they might use it to alter history in some way. Whether they can use the quantum tunnel to go back in time and stop Thanos, or they create an alternate dimension or timeline remains to be seen, but time travel using the Quantum Realm is bound to be a major plot point of Avengers 4.

There's also a possibility that Avengers 4 takes place further in the future than originally thought. Leaked set photos have revealed Captain America dressed in his old, circa Battle of New York uniform, alongside a significantly grayer-haired Tony Stark, suggesting their efforts aren't taking place right after the end of Infinity War.

Supporting that theory is also the fact that Avengers 4 has recast the actor who plays Scott's daughter Cassie Lang. In Ant-Man, and Ant-Man and The Wasp, Cassie is played by a young actor named Abby Ryder Fortson. But as MovieWeb reports, rumors abound that a 16-year-old Emma Fuhrmann is taking over the role. It's possible that Cassie's increased age has nothing to do with the setting of Avengers 4, but it seems a little too much of a coincidence that, in a movie assumed to has such a huge time travel component, it wouldn't be incredibly intentional.

The Ant-Man and The Wasp closing credits scene also suggests that the Quantum Realm has some sort of power over the Infinity Stones, and could possibly act as an antidote to Thanos' world-ending finger snap. But since the post-credits scene showed Scott trapped in the Quantum Realm, he'll have to figure out how to get out of there before he can figure out how he can use it to his advantage.

This article was originally published on July 3, 2018