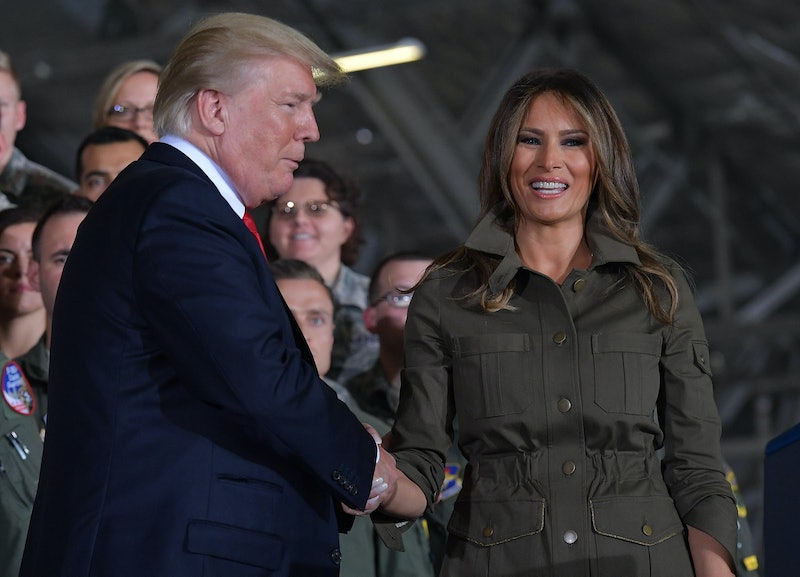 After Barack and Michelle Obama's constant love fest, maybe the next president and his or her spouse were always going to have a seemingly stunted relationship. But still, Donald and Melania Trump bring intra-marriage awkwardness to a new level. There have already been numerous painfully awkward Donald and Melania Trump moments, starting from before he even took the oath of office and continuing up until the most recent handshake incident at Joint Base Andrews over the weekend.

It's hard to take in, it really is. You never want to be privy to the unpleasantness in a relationship that's not your own, even if you just have to witness all of the awkwardness on TV. And maybe in this case, none of this should come as a surprise — after all, Melania chose to live separately from Donald for the first five months of his presidency, and the campaign forced her to witness a moment in which he ogled another woman's body and used some very unsavory "locker room talk." Even if we could have guessed that there was trouble in paradise, usually public couples have a way of keeping up appearances — but Donald and Melania, not so much. Here are their most awkward relationship moments so far, ranked by exactly how cringeworthy they were.

More like this
Watch Jacinda Arden’s Devastatingly Honest Resignation Speech
By Sam Ramsden
Man Meets Politics: ‘Boy Meets World’ Star Ben Savage Is Running For Congress
By Jake Viswanath
Vanessa Hudgens Is Reportedly Engaged To Cole Tucker
By Jake Viswanath
RHOP’s Robyn Dixon Explained Why Juan Paid For Another Woman's Hotel Room
By Brad Witter
Get Even More From Bustle — Sign Up For The Newsletter
From hair trends to relationship advice, our daily newsletter has everything you need to sound like a person who’s on TikTok, even if you aren’t.