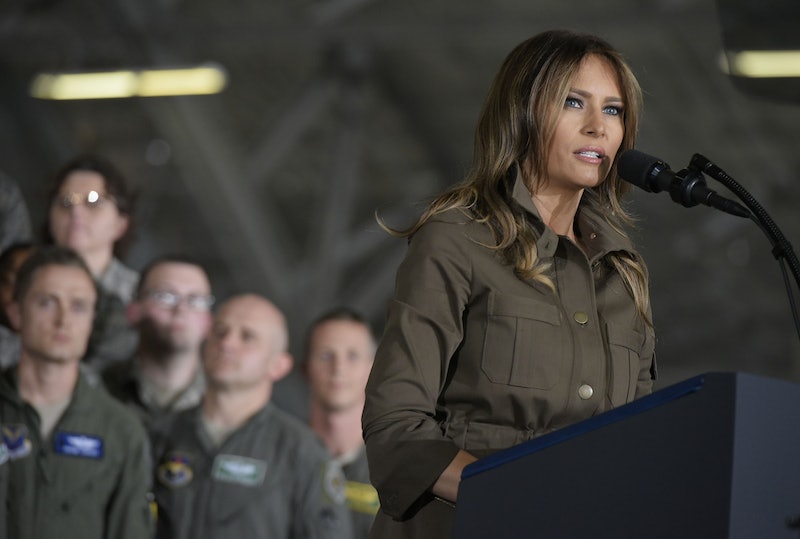 Donald Trump delivered a speech for military members and their families at Joint Base Andrews in Maryland on Friday. The event, which was conducted to celebrate the 70th anniversary of establishing the United States Air Force, was preceded by an air fleet demonstration presented for the president. But the most remarkable aspect of the entire event didn't seem to be the air fleet presentation or even Trump's talking points. It seems as though Trump's awkward and stiff handshake with Melania has become the most unforgettable part of the anniversary at Joint Base Andrews.

In a video clip shared by Irish journalist Caitriona Perry, Melania can be seen introducing her husband to the podium while saying, "It's my great pleasure to introduce my husband. The president of the United States, Donald Trump." As the audience applauded, Trump began walking forward to his wife.

Normally, based on historical precedents set by other American presidents, the leader here would typically reach to embrace his spouse and then commence the primary speech of the event. But in this case, Trump extended his hand forward and Melania simply shook it. After shaking hands, Trump thanked Melania while directing her to leave the stage with his hand on the small of her back. The internet instantly took notice of this strange and uncomfortable spectacle.

Some said that after the handshake, Melania "ran off the stage, screaming for hand sanitizer" while another personally opined, "She hates him more than anyone else because she's seen him at close range and is sickened by him." No one definitively knows what the source of the apparent discomfort is between the president and his wife's body language but it wouldn't be wrong to say that the formal and hastened handshake did raise quite a few eyebrows and questions.

This wouldn't be the first time that Trump's handshake attracted public curiosity and incredulity. The president is known for a number of peculiar and drawn-out handshakes with national and foreign public officials. With notable political figures, Trump has exhibited a particular kind of handshake involving a firm grab followed by a pull. You may have seen this style of handshake wherein Trump grabs the other individual's hand with notable firmness, pulls the individual forward in a jerk, and holds their hand for a considerable time. Trump's intense deployment of this variety of handshake is evident in the diplomatic exchange he had with Japan's Abe Shinto as well as the aggressive yank Trump gave Justice Neil Gorsuch.

Body language experts claim that such a handshake is a power move rooted in an attempt to show the acquaintance dominance. But on other occasions, Trump seems to have ended up in awkward handshakes where he misses them by an inch or reaches for a hand that isn't there. For instance, it seemed as if the First Lady of Poland completely overlooked Trump's extended and lonely hand during the president's trip the country.

While Trump's handshake with Melania may have attracted most of the internet's attention by becoming the unofficial highlight of Joint Base Andrews' event, the primary agenda for the day was for the president to deliver his thoughts on national security and the North Korean regime. The president also shared his condolences for the terror attack that took place in London and injured at least 29 people on Friday. The Islamic State claimed responsibility for the subway attack later on. In addition to offering his thoughts on the most recent London terror attacks, Trump noted North Korea's recent and longest-ever test flight that was conducted on Friday. Trump extolled the military members in front of him and said, "After seeing your capabilities, I am more than confident than ever that our options in addressing this threat are both effective and overwhelming."