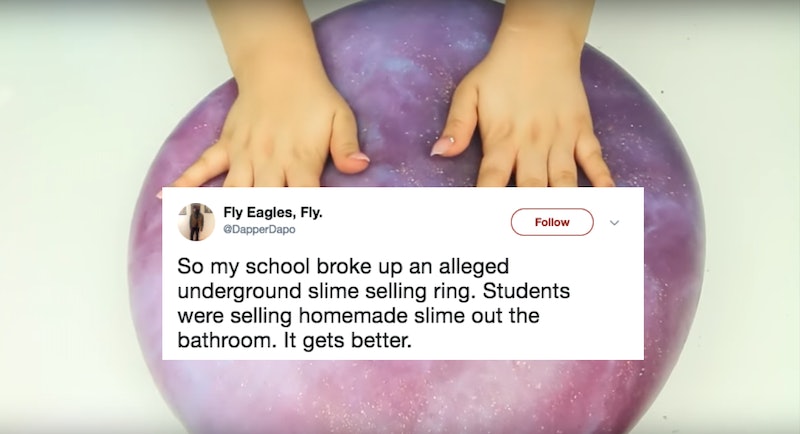 Gather round, everyone, and prepare to feel deeply, deeply inadequate re: the amount of hustle you just put into your day job today. While the rest of us woke up blearily these past few weeks trying to rub the nine-to-five out of our eyes, a group of fourth graders — nay, baby entrepreneurs — were hard at work, creating an underground slime selling ring in their school bathroom that, as the story goes, was becoming quite profitable before it got busted. A third grade teacher at the school chronicled the rise and fall of the Slime Empire on his Twitter in a thread that has since gone viral, and everyone better settle in, because it is riveting from beginning to end.

Honestly, if this doesn't turn into the basis for a pilot of an HBO show, I'm going to be disappointed. It has everything I need — ingenuity, underdogs to root for, cutthroat competition, and, of course, The Man bringing everyone down. This is a prepubescent Breaking Bad. This makes your Pokemon card hustles in the '90s look like child's play. (I mean, OK, it was. But we were living in 1997 and these kids are clearly living in 3017.)

Let us set the scene: a girl's bathroom at an elementary school, aka where everyone knows the realest and truest of childhood dramas go down.

A bit of an explainer, for those not already familiar: Generation Z (and, I suppose, millennials, although this trend went right over my millennial head) is super, duper into slime. Just basic slime, like the kind you used to make at kid's birthday parties or summer camp in the '90s. They love watching videos of it, making videos of it, buying it, and playing with it, either for fun or self-care — slime has become an unexpectedly versatile, if not bizarre, viral trend.

In fact, in July, a woman was even featured in The New York Times for her entrepreneurial slime genius. Karina Garcia, or the "Slime Queen" of YouTube, makes as much as $200,000 a month with her slime making video tutorials. She has since even invested in a slime studio, which is well warranted — one of her videos, "100 lbs of Slime," has over 17 million hits.

TL;DR: There is money in slime. And even the babies know it. So our story continues ...

RECEIPTS. Wrap your adult brain around that for a moment. These children made receipts. I barely even remember to pay my cable bill on time every month. Anyway, here's where the plot thickens.

These kids just hacked a system that the rest of us majored in marketing in college to figure out. Capitalism AF.

OK, in the movie version of this, there is a turf war and everyone gets slimed, I'm just saying. Unfortunately, in reality, the fun ends there; the teacher shared a video after the the Great Slime Bust of 2017, showing that all the goods had been apprehended by the proper authorities (read: the dean), and presumably some sort of rules were about to be put in place.

In the words of my ancestors: WOMP.

A later tweet clarified how they were caught — not that it will do anything to temper your disappointment. This is Cho Chang's friend ratting out Dumbledore's Army all over again, guys.

No word yet on what will officially happen to this prolific slime ring, but it has generated a lot of funny responses online, including confusion from adults.

Of all the '90s things we were expecting to come back in style, I think it's safe to say that slime was not one of them. And although this story has a somewhat disappointing end, it has made me hopeful for whatever generation comes after Gen Z, because their startup game is stronger than any of ours was.