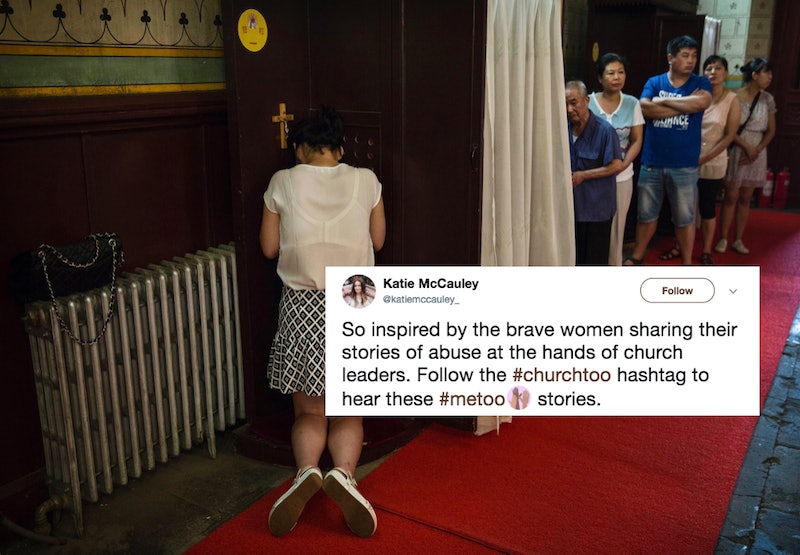 In the wake of sexual misconduct allegations against film tycoon Harvey Weinstein (who has denied accusations of nonconsensual sex), actress Alyssa Milano invited women to share their own experiences using the hashtag "Me Too." It went, understandably, viral. Shortly after the hashtag took off, reports emerged that the original idea for "Me Too" came from activist Tarane Burke who started it as a grassroots movement to support people who had experienced sexual abuse. Now, another Twitter hashtag "Church Too" is up with survivors detailing sexual harassment and abuse in places of worship like churches.

The hashtag started on Tuesday and was described by one Twitter user in these words, "There's a hashtag on Twitter right now called #ChurchToo where people are sharing their stories of sexual harassment and abuse in religious (primarily Christian) settings. It's a sobering, powerful, disturbing read. Many thanks to the brave people sharing their stories." According to another user, the origin of #ChurchToo was traced to two women, writer Hannah Paasch and spoken word poet Emily Joy

Allegations of sexual abuse taking place in churches aren't new. Time and again, there have been media reports of misconduct and inappropriate behavior coming from priests and pastors. But hashtag "Church Too" gives the power and control over narration to the very people who have experienced such abuse. As of this moment, the hashtag has over 2,000 tweets and it seems like it will continue to grow.

Warning for people who may feel triggered by the hashtag as some of the content is disturbing.

This user talked about their mental health being affected by their experience in church.

For many, the memories never leave.

In some instances, people detailed harrowing experiences where survivors were blamed for the sexual abuse they went through.

If there was anyone balking at the idea of exposing church-related abuse, this user addressed it by saying, "This hashtag is holy, necessary, and barely scratches the surface."

6. Receive Rather Than React

Another user implored people to receive the sensitive information as opposed to reacting to it.

For some, one of the most distressing reality was knowing there were no consequences for abusers.

This particular account detailed their experience after confiding to a female volunteer at a youth group.

10. From One Of The Creators

One of the creators of the hashtag encouraged more people to share their stories.

A reverend gave her assurance to the hashtag users.

"The most infuriating one of all: The man who raped me is now a pastor in Oklahoma," one user wrote.

Over and over, users wrote about about observing hypocrisy.

Some spoke of never sharing their truth with their friends out of fear of judgement.

Many stories in the hashtag related to childhood experiences.

For anyone unsure of coming forth, one user wrote, "You are believed."

Similar to #ChurchToo was another hashtag known as #EmptyThePews, which detailed church-related sexual abuse stories.

Learning about consent is critical.

Some users shared the stories of their friends.

The next step after the hashtag, according to this user, was to demand churchgoers to do better.

Non-Christians, too, shared their experiences from their own places of worship like this hashtag #ShulToo which points to accounts of abuse in synagogues.

Some called for naming the names of the abusers.

A frequent lament was about the lack of action taken by the church.

Some pointed to other cases of misogyny.

27. Thank You For Your Courage

Users were thanked for their bravery to share their stories.

From the looks of these tweets, the abuse of power isn't limited to Hollywood.