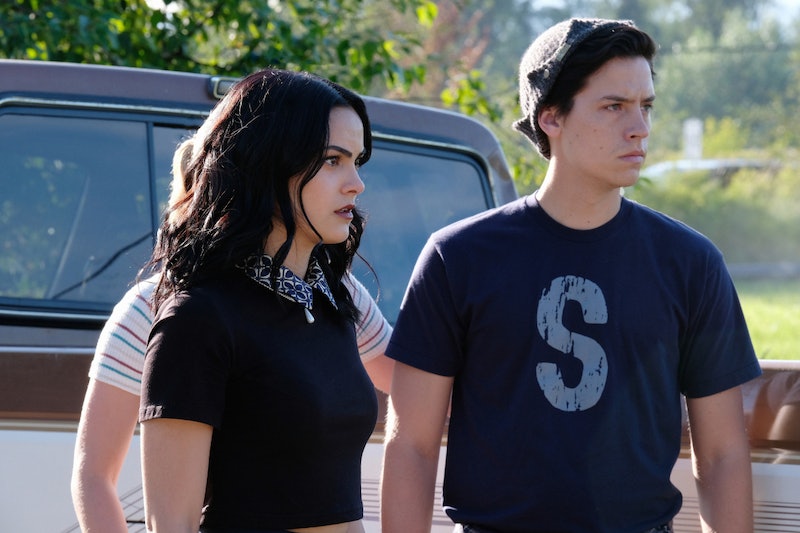 It's been well established that the town of Riverdale is unsafe to everyone living there (and yet they don't move away!!), which is part of why, even as a main character, Jughead's fate feels so uncertain. The flash-forward included at the end of Season 3 — and all the subsequent flash-forwards since then — seem to indicate that the beanie-clad journalist befalls a tragic end by spring break. However, there are several clues that Jughead actually doesn't die on Riverdale, despite what the writers clearly want fans to believe. Let's review:

As bleak as things may look for Jug in the flash-forward, we've yet to see his body, which is a tell-tale sign a character is, in fact, not dead.

Kidnapping Is Just As Likely

The synopsis for Riverdale's Oct. 30 episode mentions that "Jughead learns about a series of mysterious disappearances that have occurred to former students" at his new school, Stonewall Prep. What if after a little investigative work, Jughead learns too much and becomes the next victim? A disappearance is just as possible as death, but a lot less final.

During San Diego Comic-Con in July, Riverdale star KJ Apa (Archie) revealed that Cole Sprouse was originally supposed to be in the flash-forward, and was only written out because he didn't want to film in his underwear on a chilly night. "The only reason why that happened was because Cole was cold that night," Apa said, per TVLine. Lili Reinhart (Betty) backed him up, adding, "It literally was scripted with all four of us, and he was like, 'I don't want to do it.'"

If his presence in the scene was so easily changed, his absence doesn't seem to play a crucial part in the story. And if it isn't crucial, then his fate may be a lot less dire than viewers are being led to believe.

Cole Sprouse Doesn't Seem Too Worried About It

In a recent interview with Variety, Sprouse discussed the ominous Season 3 ending and what it could mean for his character's future — namely, that even if Jughead does die, he won't necessarily be off of the show. "To be honest, I think there could be a Riverdale without every single one of our characters," he said. "And then we'll appear as ghosts, or our twins will take our place."

He added that the show has given him a renewed appreciation for acting, and that he isn't in a hurry to move on to other projects — none of which confirms Jughead will live, but at least helps to alleviate any concern that he's being written out because he wants to leave Riverdale.

The Show Has Fake-Killed Jughead Before

The penultimate episode of Season 2 ended with FP carrying Jughead's limp, unconscious body through the woods after Penny and the ghoulies attacked him, suggesting he was dead. But he turned out to be completely fine (if a little beat up) — which will likely be the case in Season 3 too, if these clues prove anything.