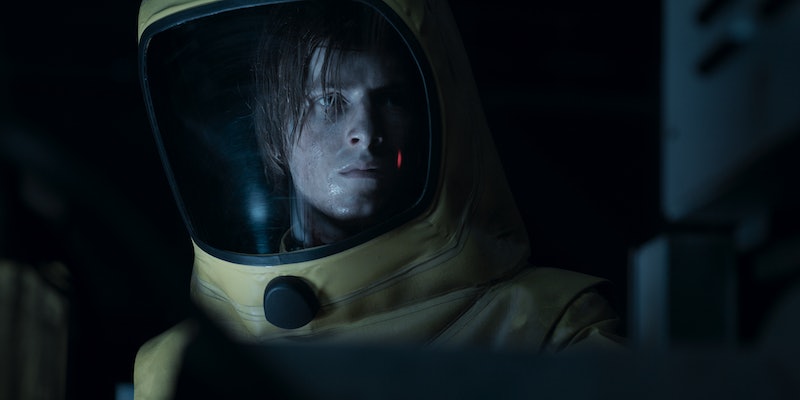 Netflix's Dark is the kind of show that incites so much speculation, it's kind of like a snake eating its tail — or an unbreakable time-travel loop. But while it might be impossible to predict where things will go next (or even understand what's currently happening), some Dark Season 3 theories are so compelling, they'll make you want to invent your own time machine and leap 33 years into a future where the show's final season is already available to stream. (Of course, you run the risk of ending up in a post-apocalyptic wasteland without any Netflix at all, but who ever said time travel was easy.)

Dark's bonkers second season answered a lot of questions, but it left just as many unresolved... and introduced several new ones, too. We now know that the mysterious Adam, introduced this season, is none other than an older, evil-er Jonas, who's destined to wreak havoc on Winden across time. We also learned one of the most shocking twists thus far: Charlotte's dad is Noah, and her mother is her own daughter, Elisabeth. Furthermore, the final moments of the finale revealed the existence of not just multiple timelines, but multiple dimensions, as a second Martha appeared to Jonas moments after the original Martha was killed and whisked him off to her own parallel reality.

So what happens now? Here are some of Reddit's craziest theories.

Speaking of the revelation that Adam is Old Jonas, some viewers aren't convinced. Reddit user arrivinganddeparting posits that Adam is actually Bartosz, who is just manipulating Jonas by pretending to be an older version of him. Perhaps the purpose of the extensive facial scarring isn't to disguise the fact that Adam is Jonas, but rather to facilitate an even longer deception about his identity.

Unlike Magnus and Franziska, Bartosz hasn't yet been seen in any other timeline. He was transported through time by Adult Jonas along with his classmates, but he hasn't yet popped up in the 1920s… unless he has, as their nefarious boss. Perhaps he's harbored a grudge against Jonas for coming between him and Martha, and this is all a master revenge plot: to kill Martha for choosing Jonas over Bartosz, and to torture Jonas for stealing her from him.

Another fan theory out there would directly contradict the possibility that Bartosz is Adam. According to Thend3r on Reddit, the unidentified man that Young Noah murders in the opening sequence of Season 2 bears a remarkable resemblance to an older Bartosz. If that is Bartosz, who ended up in the past with Magnus and Franziska after traveling with Adult Jonas, it's possible that Noah just murdered his own brother-in-law.

Before he murders the man, Noah accuses him of having lost his faith. In the 1950s, Agnes Nielsen (revealed in Season 2 to be Noah's sister) told Doris Tiedemann that her absent husband, the father of her son Tronte, was a pastor who lost his faith. Could she have been referring to Bartosz? If so, that would make Bartosz the unknown father of Tronte Nielsen, the grandfather of Ulrich Nielsen… and the great-grandfather of his own beloved Martha Nielsen.

Season 2 revealed that the mysterious Noah and Ulrich's grandmother Agnes Nielsen were actually siblings… but who are their parents? Reddit user JAH3169 points out that, at one point, Noah asks his younger self, "Why do you think he named you Noah?" in reference to Adam. While that could be implying that "Noah" is just a biblical code name given to the Sic Mundus member by the organization's leader, it could just as easily be implying that Adam gave Noah his name because Adam is literally Noah's father.

The name "Adam" itself supports this theory, since it could indicate that, through a complicated tangle of time travel, Adam is somehow the progenitor of every single main character on the show. Noah fathered Charlotte Doppler with Elisabeth, who would go on to give birth to her own mother; Agnes' direct descendants are Martha and Magnus Nielsen; her great-grandson Mikkel fathered Jonas Kahnwald; and it's implied that her son Tronte was the illegitimate father of Regina Tiedemann, who gave birth to Bartosz. If Noah and Agnes are Adams' children, then literally the entire generation of 2019 Winden teens are directly descended from him — making Jonas his own great-great-grandfather.

But if Jonas is Adam, then who is his Eve? Who helped him spawn the tangled family tree that is Winden? The obvious candidate would be Jonas' star-crossed lover/aunt, Martha Nielsen, as stardust4711 points out on Reddit. But how is that possible, now that Martha is dead, shot by Adam in front of his younger self? Well, the final moments of Season 2 conveniently introduced a second Martha, apparently arrived from another "world" where she was never killed.

If there's an older version of Alterna-Martha out there, just like there's an older version of our Jonas, could she have traveled between worlds like her younger self to become the Eve to Jonas' Adam? If so, is she evil like him? Is she the villain of her own world just like Adam is the villain of this one? Or is she an opposing force, the light to his dark?

5. Aleksander Is The Son Of Jonas & Martha

Heading into Season 3, one of the show's biggest remaining character-based mysteries is the identity of plant director Aleksander Tiedemann, whose real name is Boris Niewald. His backstory played a crucial role in Season 2, since the mystery of his past is what brought Clausen to Winden, who turned out to be the person who triggered the apocalypse when he demanded the barrels of nuclear waste be opened. But who is Boris Niewald, really? Reddit user love_day_cup_all noticed that the name "Niewald" could easily be a portmanteau of "Nielsen" and "Kahnwald." Could Aleksander/Boris somehow be the child of Martha Nielsen and Jonas Kahnwald, aka Adam and Eve? If so, that would make him the third sibling of Noah and Agnes if the theory of their parentage also holds true.

The key to this theory might be Boris' gun, the one that Jonas' mother Hannah held onto for so long. Adult Jonas took the gun from Hannah and used it to force Martha to go to the bunker; some time later, the same gun ended up in the 1920s in the Sic Mundus headquarters, which Noah tried to use to kill Adam, and was used by Agnes to kill Noah after he failed. Then the same gun was used again by Adam to kill Martha in the final moments of Season 2. If everything is a loop, how did that gun return from Adam's hands in 2019 to Boris' as he arrived in Winden in 1986? Did Adam give the gun to his own son before sending him through time?

But if Aleksander/Boris is the son of Adam and Eve, knowingly or unknowingly, how did he end up arriving in Winden in 1986? It's possible he was sent back in time by one or both of them to fulfill his role in inadvertently triggering the apocalypse. In fact, alterna-Martha's fingerprints are all over this particular manipulation, literally.

Reddit user areebnarkar noticed that the handwriting on the letter from Martha that young Noah gives to Adult Jonas perfectly matches the handwriting on the letter that Clausen showed to Aleksander during his interrogation. If you'll remember, that letter was sent to Clausen from an anonymous source, informing him that the answers he sought surrounding his brother's disappearance could be found in Winden. But who drew Clausen to Winden in the first place? If the handwriting is any indication, it was Martha, who must have drawn Clausen to the town knowing that his investigation into Aleksander's past would lead to the apocalypse.

8. Winden Will Be Erased

How will Dark end? How does this tangled knot of timelines and family trees ever unravel, if at all? Perhaps the only way the cycle is broken and the apocalypse is averted is if Winden itself doesn't exist. User arnav1311 promotes this very theory on Reddit, saying: "I think Winden isn't supposed to exist. Winden, the city itself is a paradox. Every citizen cannot exist without time travel and it's all tied up in a loop. Winden is the problem and the show, I believe will end with Winden never having existed.

Season 2 put a lot of emphasis on the "bootstrap paradox," in which an item or person exists on an infinite loop and therefore has no origin, but rather has simply always existed. But if the theory about everyone in Winden descending from Adam/Jonas is true, then pretty much the entire town is one giant bootstrap paradox, as Coltsblue points out on Reddit. Perhaps the only way it can ever end is if someone finally finds one end of that infinite bootstrap and pulls, unraveling the whole Gordian knot and erasing Winden from existence.

Which of these theories will come true? In the absence of a time machine, fans will have to wait until Season 3 arrives on Netflix sometime next year — possibly on June 27, 2020, as some fans theorize, given that's a significant date in the world of Dark: the day of the Winden apocalypse itself.