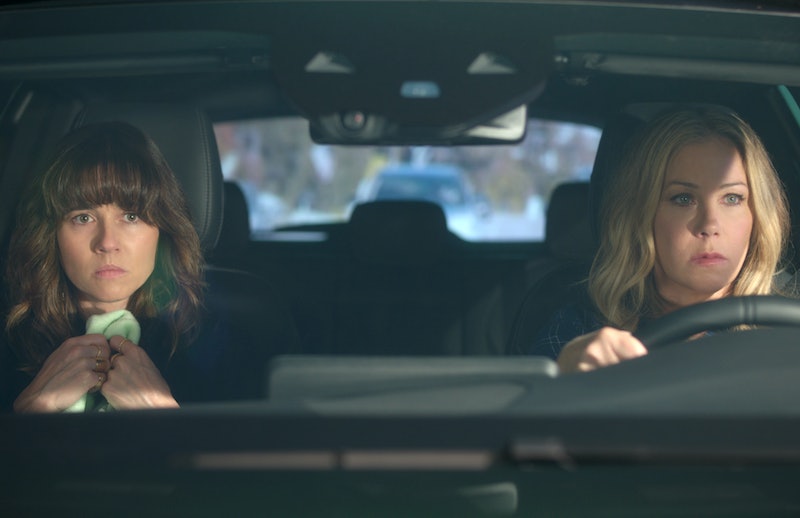 Spoilers ahead for Dead To Me Season 2. With such a big Season 2 cliffhanger, it was only a matter of time before Dead to Me Season 3 theories started sprouting up all over the internet — even despite the fact that the show hasn't officially been renewed. Most of the theories so far revolve around that fact that Ben crashed his car into Judy and Jen's — seriously injuring Jen in the process — then fled the scene because he'd been drinking. But fans have some thoughts about what will happen with Charlie, Judy's mom, the Greek Mafia, and Steve in Season 3, too.

Though Jen killed Steve at the end of Season 1, the police still think Steve is missing, not dead (aside from Detective Perez, that is). Perhaps Ben will pretend to be Steve in order to help cover for Jen — who he fell for in Season 2 — or to get himself out of a bind. If he adopts Steve's identity, he won't have to face up to the fact that he was involved in a hit-and-run.

Another theory is that Jen actually killed Ben — not Steve — and Steve was simply pretending to be Ben this whole time. It seemed like a hiker's dog found "Steve's" body at the end of Season 2, so perhaps investigators will discover it's actually Ben's body. As @madamzarie pointed out on Twitter, much was made about Ben having scars from heart surgery, and the body in the woods could have those same scars. (Though it's worth mentioning that "Ben's" scars were visible in the scene where he slept with Jen).

Fans also noticed that Ben seemed to change clothes between leaving his house and hitting Jen and Judy with his car. When he left, he was wearing a flannel shirt and a vest. When he crasheed his car, he was wearing a light blue button-up shirt not unlike something Steve would wear. Curious.

Charlie Will Learn That Judy Killed His Dad

At the end of Season 2, Charlie found the letter that his mom wrote to Judy. In it, Jen had written, "I'm sorry I couldn't forgive you sooner for Ted." That doesn't exactly spell out the fact that Judy hit Ted with her car, but Charlie may put two and two together. Jen and Judy have long since worked things out over that issue, but Jen's kids will likely not be as forgiving.

Ben's Phone Call May Not Have Been About Steve

Before he drove off, Ben got a phone call that seemed to be about Steve's body being found in the forest. But since we don't know who actually called or what they said, it could have been about something else entirely.

We know Jen isn't dead because she was conscious and talking groggily, but Redditor french-yogurt theorized that Jen may have been injured badly enough that she won't remember she killed Steve.

Judy's Mom May Get Released

Judy's mom isn't dead like she made her out to be — she's in prison. Judy was going to try to get her mom a good lawyer, but instead realized she hadn't changed and spent her hidden money on Jen and the kids. If Judy's mom gets released in Season 3, she may be looking to get some revenge on her daughter for betraying her.

This was further hinted at during an interview Dead to Me creator Liz Feldman did with TV Line. She told the outlet that she wants to give fans "hope" for a Season 3 reunion between Katey Sagal (Judy's mom) and Christina Applegate (Jen), who used to co-star on Married with Children. For this to happen, Jen would need to visit Judy's mom in prison...or Judy's mom would need to get released.

Jen Could Become A Suspect Again

The Greek Mafia was arrested for Steve's murder based on tapes Judy found of calls between them and Steve about money laundering. Without Steve's body, that was all the evidence they had to go on. But the Greek Mafia didn't kill Steve, and if his body has been found, the evidence may point back to Jen. Not only would she be a suspect again, but the Greek Mafia could make her a target.

Judy and Michelle made a great couple, but Michelle went MIA after learning about Judy's troubled history with the law. Now that Jen told Perez Judy wasn't involved in Steve's death, however, perhaps Perez will tell Michelle she was wrong, opening the door for her and Judy to get back together.