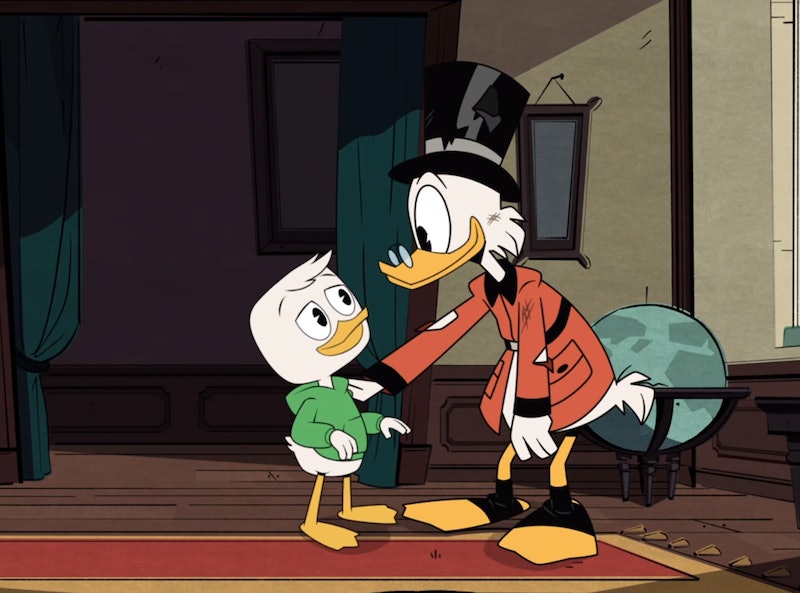 Welcome back to Duckberg, classic cartoon fans. Disney XD's new DuckTales reboot clips are here to reassure you the new adventures of Huey, Dewey, and Louie look every bit as fun as the ones you grew up watching. In the three clips from the series, you get a look at the kind of trouble the brothers can get into, the ingenious way Scrooge McDuck saves money, and Donald's timeless temper. As a longtime fan of DuckTales, I may be biased, but the adorableness on display in these clips has me daydreaming about reinstating my childhood Saturday morning cartoons and cereal combo immediately. Or whenever Disney XD reveals when the reboot will actually premiere.

Each one of the clips highlights a different dynamic between these timeless characters. There's a preview of Donald's birthday celebration that goes awry in the best way possible, Huey showing off his wilderness skills, and even a bit of time travel. When DuckTales first debuted in 1987, the show delighted in exploring multiple genres, including comedy, superheroes, and adventure. The reboot appears to be following in the original's webbed-footprints, which is excellent news for anyone who likes their cartoons to feature a little bit of everything.

In fact, the show's co-producer Francisco Angones revealed to Entertainment Weekly that the update had two very different, but weirdly perfect inspirations. He said,

"The basic conceit of growing our show was that this is a big blended family of adventurers, so it should feel like a combination of 'Indiana' Jones and a blended 'Arrested Development'-style family sitcom where every character has a different relationship to one another."

You can see that philosophy on display in the three DuckTales sneak peeks below.

Donald faces off with the ultimate trick candle in this clip, but the best part has to be hearing David Tennant in action as Scrooge. While I'll have to wait until the premiere to be sure, I suspect this is perfect casting. The Doctor Who star's line delivery in this clip is so flawless, it's hard not to giggle at his explanation for the candle's bizarre behavior.

The next clip goes meta when Tennant's Scrooge ends up traveling through time when Louie tinkers with a special clock. Does anyone else want to go exploring in Uncle Scrooge's mansion now?

According to the EW interview, the reboot is going to clarify that Huey is the oldest, Dewey is the middle child, and Louie is the youngest. Part of establishing their ages is also giving them distinct character traits. As the oldest, Huey is going to be both responsible and a lover of knowledge. Both of these attributes are made clear when he goes Sasquatch hunting in the final preview.

The DuckTales reboot is set to premiere later this summer, so get ready to say a sincere woo-hoo soon.