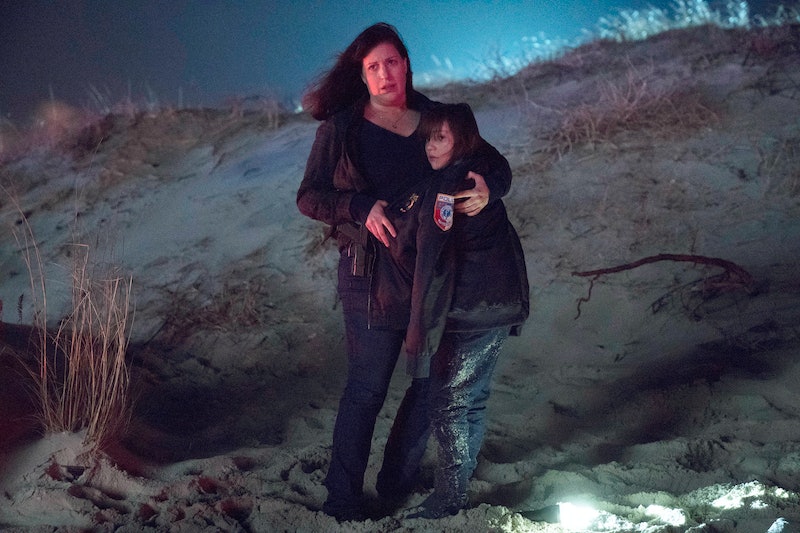 Spoilers ahead for the Sept. 24 premiere of Emergence. There's a lot of weird stuff going on in Emergence: a mysterious plane crash, fake government agents, widespread electrical failings. But they can all be traced back to one thing: Piper, the young girl who police officer Jo Evans finds cowering on the beach near the crash. Because she has no memory of who she is or how she got there, it's unclear what happened to Piper. But showrunner Tara Butter has promised we'll get answers sooner rather than later.

"We know [waiting for answers] can be annoying, so we're going to give answers, big ones — including revealing Piper's true identity — sooner than you think," she told TV Line earlier this month.

The first episode already delivers on that promise. From Reuters reporter Benny (Owain Yeoman), we learn that the plane that brought Piper to this sleepy seaside town came from a Homeland Security research facility just a few miles away. But like any good mystery show, that revelation only leads to more questions. Why was Piper there? What was being researched? Can Benny even be trusted?

Until we get more answers, here are a few theories about Piper that may help you piece together the puzzle.

Piper Is A Psychic Government Weapon

It's clear that Piper has some supernatural abilities at her disposal, including the power to manipulate water and metal, which makes her a threat to just about anyone who crosses her path. Stranger Things fans have watched a similar story unfold over three seasons, as the character Eleven also escaped a facility training her to have psychic abilities. Emergence even ends with a flashback to what appears to be a sensory deprivation device, such as the one used on Eleven in Stranger Things. The two shows are unrelated, but Piper and Eleven's stories could be very similar.

Piper Is From Outer Space

There's something calling out to Piper that she doesn't want to find her. After settling into the Evans household, a television screen begins to glitch and show a symbol that Piper appears to have some familiarity with. Then, in the episode's final moments, she reaches into her own neck with surgical precision using a boxcutter and pulls out an orb of some kind with that same symbol inside of it. The technology that bears that symbol seems a lot more complicated than human technology, which suggests Piper may not be from this world and could be an extraterrestrial or some other being.

Piper Is Related To Nancy Somehow

During a lot of the premiere episode's close-ups, Piper's eyes command attention. They're a striking shade of blue — just like Nancy's. The two also have an instant chemistry and familiarity despite having just met. This could suggest the two are related, although neither of them realize it.

Nancy's vanishing mother could also be a hint she and Piper are connected. Piper certainly has some unexpected maturity; is it possible she's a lot older than she seems? Is Piper actually Nancy's sister? Is Piper actually Nancy's mother who now looks nine years old for some reason? Piper clearly isn't a normal child, but there's a chance that she's actually a not-normal adult.

Piper Is A Mutant From X-Men

OK, hear me out. In May, Disney acquired 20th Century Fox, which owns the rights to X-Men, meaning that ABC could start airing projects from within the X-Men universe. Piper is displaying some mutant-like abilities, and the symbol seen flashing on the TV and on the orb in her ear looks kind of like an X with a square in the middle of it. Could this be ABC's way of getting people to watch an X-Men show without telling anyone it's an X-Men show? Are the shadowy "government" figures actually working for Professor X or Magneto? Will Wolverine show up? The answer to all of those questions is "probably not," but it's still a possibility.

Whatever the case may be, hopefully we'll find out soon.