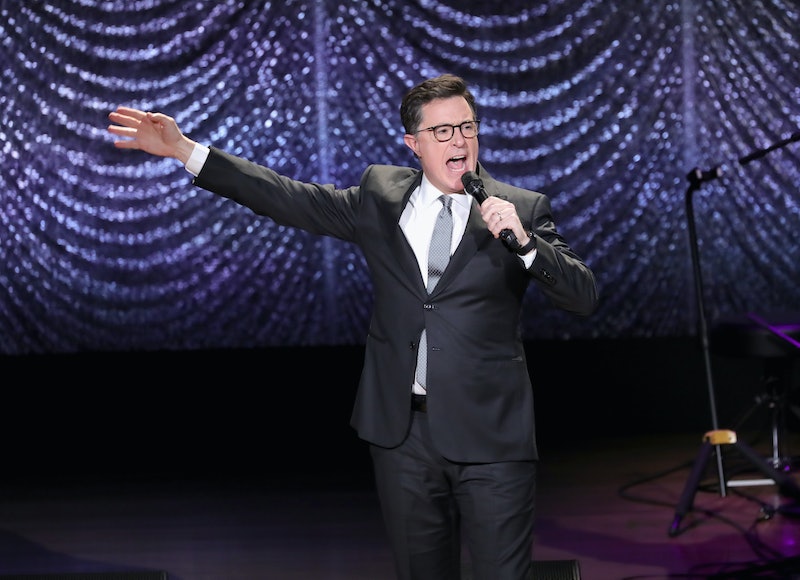 Stephen Colbert's rant against President Trump on Tuesday night struck a nerve among Trump supporters. In response to Trump calling John Dickerson of CBS News' Face The Nation "fake news" and deriding the show during an interview, Colbert unleashed a profanity-laced tirade at the president, going so far as to say "the only thing your mouth is good for is being Vladimir Putin’s c--k holster." Predictably, Trump supporters are not happy about it. They're so upset, in fact, that they're calling for Colbert to be fired over the anti-Trump opening monologue and accusing the Late Show host of homophobia.

Quickly after the segment went live, the #FireColbert hashtag began trending on Twitter, all the way into the wee hours of Wednesday. The grievances seemed to center around Colbert's off-color joke about Trump and Putin.

"Mr. Trump, your presidency — I love your presidency. I call it Disgrace the Nation. You’re not the POTUS, you’re the BLOTUS. You're the glutton with the button. You’re a regular Gorge Washington," Colbert said. "Sir, you attract more skinheads than free Rogaine. You have more people marching against you than cancer. You talk like a sign-language gorilla that got hit in the head. In fact, the only thing your mouth is good for is being Vladimir Putin’s c--k holster."

But as Trudy Ring at the Advocate pointed out, Trump supporters are curiously far more outraged over the apparent homophobia in Colbert's joke than LGBTQ people are. The hashtag was steadily taken over by those who questioned Trump supporters' sudden interest in LGBTQ issues and political correctness, considering their continued support for a man caught on tape boasting about grabbing women's genitals, not to mention the multiple allegations of sexual misconduct levied against him (all of which he's denied).

While concerns about the homophobia in Colbert's joke are valid and worth scrutinizing — Colbert, after all, did provoke similar calls for his old show to be canceled over a purportedly racist joke — the false moral outrage from Trump supporters in their criticism borders on absurd. Their anger on behalf of LGBTQ people was absent when Trump picked Mike Pence, an avowed homophobe, as his running mate. It was absent when Trump did away with protections for transgender students, and when Trump filled his cabinet with people with long histories of opposing LGBTQ rights.

It's clear that the outrage over Colbert's tweet isn't about whether it was homophobic. Sure, Trump's supporters are free to criticize Colbert for his profanity and his open disdain for the president — but if they're going to pretend to go to bat for the LGBTQ community on this, the least they could do is show some regard for the threats that LGBTQ rights are facing under Trump.