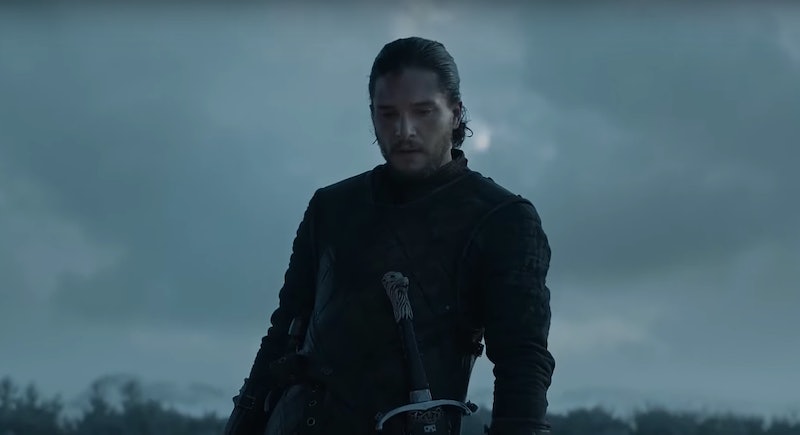 Remember the summer of 2017, when there was plentiful Game of Thrones news and theories and memes fans could just consume? When there was a new episode every week, with fresh, new scenes? Even though fans just got a new GoT Season 8 teaser, they still have to wait until April for new episodes. And so, in the meantime, to prepare for the final season, let's take a deep dive into what is surely going to be a huge plot-point, the fact that Jon Snow is a Targaryen. And one way to do that is to go through the definitive Game of Thrones moments that hinted that Daenerys and Jon are related.

While it was only just confirmed, fans have been speculating on the familiar relation for a while, finding clues here and there that Jon Snow is indeed related to the The Mad King. And more importantly, to his new lover and queen, Daenerys Targaryen, sending many into a pro-incent/anti-incest frenzy (to be clear, incest is always bad. It's just in George R.R. Martin's make-believe kingdom, the lines are sometimes blurred.)

Regardless of that new sexual development, there is no denying Jon Snow is indeed born of House Targaryen. As was confirmed in the Season 7 finale, Jon is the son of Rhaegar Targaryen and Bran's aunt Lyanna. And looking back, the hints were there nudging fans to this revelation the whole time. These six GoT moments in particular are all the proof you need to see that this is where the story was headed the entire time.

1. When Ned Stark Didn't Want To Kill The Targaryens

There were definitely times where Ned Stark and King Robert Baratheon clashed, considering how brash Robert was while Ned was more level-headed and rational. But one of the biggest fights they had, and what resulted in Ned renouncing his title as The King's Hand, was about a Targaryen. This all went down in Season 1, after Robert learned that Daenerys had married Khal Drogo. Robert felt threatened by her potential offspring and claim to the throne, but Ned was relatively unaffected. Knowing what we do now, Ned's silence and pushback on the issue was obviously because Lyanna had married Rhaegar before.

Then later, when they found out that Daenerys was pregnant, Ned absolutely refused to see her dead. While this value of human life is a key characteristic of Ned Stark, the fact that he has familial ties to the Targaryens, if only by marriage of his sister and the young man he raised as a son gives this moment bigger meaning. Of course he doesn't want to see all the Targaryens dead — an order like that could mean the death of Jon.

Oberyn appeared in Season 4 when he came to King's Landing only to die fighting The Mountain. During his visit, he told Tyrion a story about how his sister Elia was intensely in love with Rhaegar, who she was married to, but how he left her for another. This lays the groundwork for what happens later, when Gilly finds records of Elia and Rhaegar's annulment. Of course, Elia was killed and raped by The Mountain, which lead to Oberyn's need for revenge, which ultimately leaves him dead and The Mountain a zombie. All of which means, the truth about Elia and Rhaegar's marriage is as dead as everyone who knows about it.

3. When Everyone Knew Ned Stark Wasn't A Cheater

In Season 5, there's a very brief but also possibly significant line from Stannis Baratheon that hints at Jon's true parentage. Speaking with his wife Selyse about Jon Snow, and when his wife calls Snow "a bastard by some tavern slut," Stannis' response is quite interesting. He isn't offended, but rather says, "Perhaps, but that wasn't Ned Stark's way." And the thing is, he's not wrong.

Ned Stark was always very vague about the woman he supposedly cheated on Catelyn with, aka Jon's alleged mother. However, he was one of the most honorable men in all of Westeros with an immense love for his wife and family. He never once cheated on Catelyn from the time we knew him, and his reputation was that he never cheated on her again. It wasn't really in his nature to father an illegitimate child — because he didn't.

4. When Melisandre Was Super Into Jon

Fans should have known something was up when Melisandre expressed a great interest in Jon Snow in Season 5. When she first meets Jon, there's no rumblings at all that he's royalty, so for Melisandre to be interested in an average member of the Night's Watch is odd. He offered no gain for her, especially considering he's not a virgin and probably doesn't boast much help in a spell.

The only other reason for her interest would be if he had royal blood. In fact, after Stannis was killed, she revived Jon, citing her belief that he's The Prince That Was Promised. Again, this was all building to the reveal that Jon is, in fact, a legitimate prince and heir to the Iron Throne.

Not all Targaryen's have dragon's blood in them, as fans saw with the cruel-yet-satisfying death of Daenerys' brother Viserys' in Season one. However, Drogon's attitude towards Jon Snow may very well have been telling about Jon's true parentage.

When Drogon first came up face to face with Jon Snow, he was aggressive, per usual. However, once he got close enough (some would say within smelling distance), he calmed a bit. Then when Jon touched him, not only did he let it to happen, but he also growled in a contended sort of way. Judging from what fans have seen of Drogon, and Dany's face as she witnessed the interaction, this is definitely not how Drogon normally reacts with strangers. Dragon's blood — aka Targaryen blood — is the only explanation.

6. When Gilly Discovered The Evidence In The Records

Gilly is truly the unsung hero of Game of Thrones. She was practicing her reading with Sam in the Citadel when she came across the first clue about Jon's family history in High Septon Maynard's records. As Gilly discovered, the records showed that Maynard had annulled Rhaegar's first marriage to Elia Martell and remarried him to someone else soon after. This document would later prove the legitimacy of Rhaegar's marriage to Lyanna Stark, and thus of Jon Snow, giving him a legitimate claim to the throne.

Looking back at these definitive moments in Jon Snow's history, it's really a wonder more people didn't guess his true parentage sooner. Let's just hope it's enough to convince Jon and Dany when the time comes.

More like this
The 'Stranger Things' Writers Revealed 2 Tragic Unscripted Finale Moments
By Grace Wehniainen
Noah Schnapp Is Setting Up Doja Cat With 'Stranger Things' Co-Star Joseph Quinn
By Jake Viswanath
Before 'Umbrella Academy,' Ritu Arya Briefly Stopped Acting To Pursue An Out Of This World Career
By Gretchen Smail
The Star Of 'Ms. Marvel' Has A Legendary Letterboxd
By Gretchen Smail
Get Even More From Bustle — Sign Up For The Newsletter