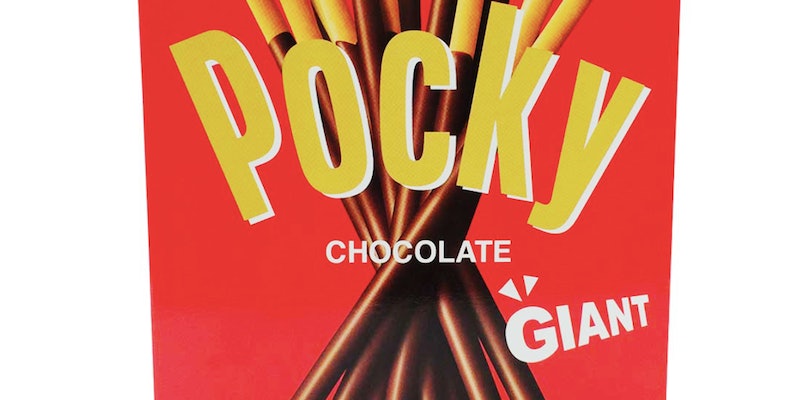 It's hard out here for anyone under five-foot-four to feel powerful, but now, at least, there is one thing that will instantly make me feel like a golden god — these giant pocky sticks are basically so large that they look like small tree branches in your hand. Carry them in a cluster and everyone will tremble at the might of your chocolate stick bounty. Hold up just one and silently challenge every human you encounter to a dessert duel. Or just be a normal person and eat them — that's a hustle I'll respect, too.

However you plan to indulge in these, you can nab this Giant Chocolate Pocky Box from candy chain IT'SUGAR for $19.99, and have them delivered straight to your door. While it's unclear exactly what the actual length of these wannabe lightsabers are, the box says it come with 18 of them, so you'll have plenty of backups for measuring if you end up immediately consuming half of them upon opening the box. After that, what you do with them is really your prerogative — mix them into a giant glass of warm milk for hot Pocky chocolate? Mildly alarm some children by handing them out on Halloween? The world is your gigantic Pocky oyster.

Since nobody does Beloved '90s Candy, But Make It Upsettingly Gigantic better than IT'SUGAR, it may not be surprising that the company has plenty more where that came from. It boasts an entire "Giant" section on its site, which is home to a two-pound Rice Krispy treat that looks less like a confection and more like a pillow to lay your head down at night, as well as a pack of two Reese's cups that clocks in at a full pound. And honestly, the giant one-pound Snickers bar is such a mood that I'm almost hoping people will start replacing it as their wedding cakes. Nothing really says "until death do as part" quite like a candy bar bigger than both of your faces, I'd say.

In the meantime, if anyone needs me for other giant candy ideas, you can find me stomping around the park with a fistful of giant Pocky yelling "tremble in the wake of my power, mere chocolate-less mortals!" and generally continuing to be an embarrassment to the human race.