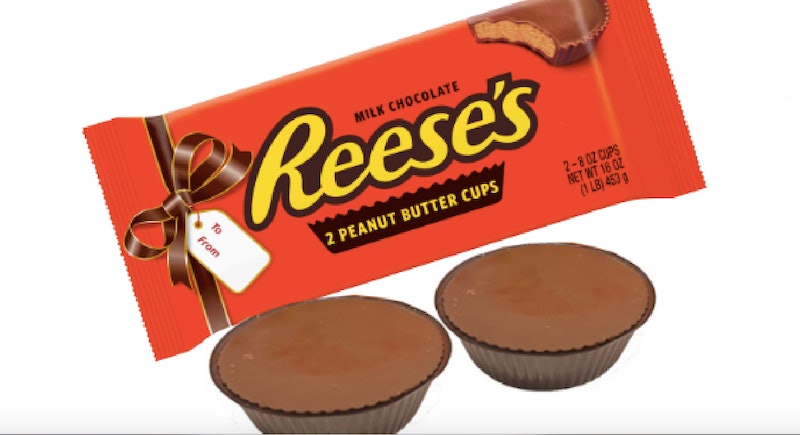 I have good news and better news, y'all. The good news is that Reese's Peanut Butter Cups exist, and their magic continues to guide us through the oft tumultuous path that is life. The better news is that you can buy a gigantic one-pound Reese's Peanut Butter Cup pack online, and have it shipped straight to your door. It is beauty, it is grace, it's meant to be stuffed in your face.

Here is what Her Majesties the Giant Reese's Peanut Butter Cups look like in all of their oversized glory.

In case that's not enough to compel you to order these, then take it from one of the four reviews on the site from previous purchases, including this five-star one from a customer named Kristina: "LOVED THE EASE OF THE ORDERING AND THE PROMPTNESS OF THE DELIVERY. WILL DEFINITELY ORDER AGAIN AND AGAIN."

You see what the giant Reese's have done? Kristina is more powerful than ever. Keyboards shudder at the might of her words. If you order a giant Reese's, you may wield this impressive power, too. And while this is not a picture of Kristina, but rather the candy model on IT'SUGAR's website (a job I fully intend to apply for the moment I complete this piece), you can see the same power of the Big Reese's Energy alight in her eyes as well.

If gigantic Reese's Peanut Butter Cups aren't your jam, then fortunately you have other aggressively oversized candy options at your disposal. In addition to the Reese's, IT'SUGAR boasts the World's Largest Box of Sour Patch Kids, the World's Largest Box Of Skittles, and the World's Largest Rice Krispie Treat, among other giant things. No, legit, there are too many giant candies on its website to count — enough that there's just an entire section of IT'SUGAR dubbed "Giant".

In any case, this is far from the latest innovation Reese's has bestowed upon us. Just recently, Reese's Thins — the enemy of the Giant Reese's — launched exclusively at Walmart, both in milk and dark chocolate form. And with Easter around the corner, all sorts of Reese's spins on springtime classics are hitting shelves, from peanut butter eggs to bunnies to peanut butter eggs again, but bigger than the first ones. No matter what mood you are in, Reese's has something peanut buttery to suit it in 2019.