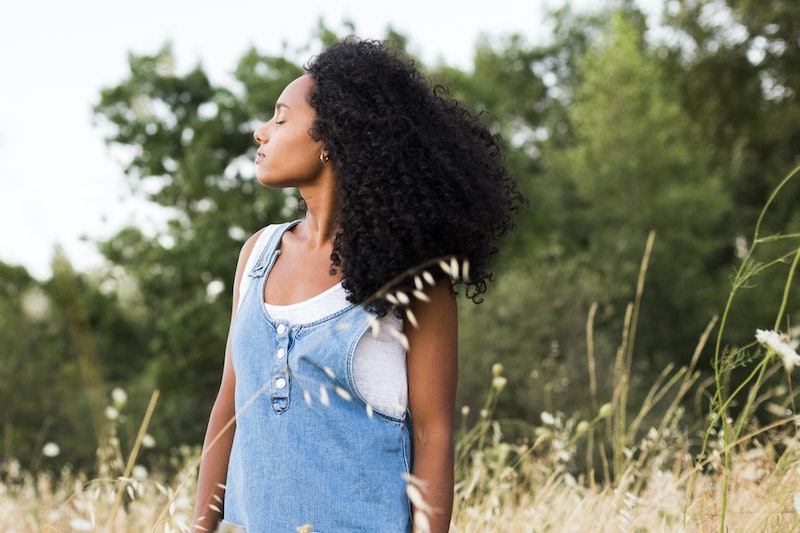 In February 2017, NPR published a study originally conducted by the Perception Institute, which demonstrated that bias towards black hair in its natural form still exists — and that finding may have implications about representation of black people, and black hair, in media. The study found "a majority of people, regardless of race and gender, hold some bias towards women of color based on their hair." However, the results reveal that this bias is a learned behavior that can in fact be unlearned.

As Beyonce pointed out in her 2017 Grammys acceptance speech, representation of people of color in media plays an essential role in bringing up confident black woman.

"It's important to me to show images to my children that reflect their beauty so they can grow up in a world where they look in the mirror, first through their own families, as well as the news, the Super Bowl, the Olympics, the White House, and the Grammys, and see themselves," she stated in her empowering speech.

But representation isn't just for black people to feel included. It also can create awareness about the unique relationship black people have with what is arguably our most controversial characteristic: Our hair.

When I first began writing about black hair care, I wanted to be part of that representation. I took my responsibility of representing our unique hair struggles seriously, but it wasn't always easy to find information to back up the content I wanted to create. For example, I believe one reason why many black people have difficulty with hair growth is because we’ve been using products that were not specifically made for our fragile, beautiful kinky tresses. However, when I would look to sites to incorporate photos throughout my articles, often — too often — there was little to no representation of black people.

But some media outlets are trying to change that. GIPHY Culture Editor Jasmyn Lawson and her team wanted to show the relationship between place people and their hair in honor of Black History Month. GIPHY commissioned work from several different black artists to illustrate our diverse textures and the often, excruciating maintenance that comes with having black hair.

Here's the great thing about these illustrations: Instead of showing our hair neat and shiny, packaged for the approval of those holding existing bias, they paint the intimacy, struggle, and achievements black people endure with their hair on a daily basis to promote awareness — because we all know, beauty ain't always pretty.

Warning: Some of these GIFS contain black hair before it's deemed "acceptable."

1. When Your Hair Is In The Hands of Multitasking Mom

For me, it was Sunday, the day my mother would capture me and sit me down what felt like (and could have very well been) hours to get my hair ready for the upcoming school week. If it were up to me, I would run for days before I would ever sit still for her to tug on my hair. Like many black kids with their hair in the firm hands of an adult, I would refuse to sit still and resort to sobbing until my mother would eventually give up and say, "If you want to be the only black kid on the playground with messy hair, then fine". Because I was actually the only black kid on the playground, my hair would be completed.

2. When Your Friends Lend a Helping Hand

The art of braiding has been used in African cultures long before the concept of "good hair" made many of us hide our natural tresses. Braids protect our tresses from dryness and help us retain moisture while giving us a break from manipulated the scalp and strands. Of course, they take hours to perform, but an extra pair of knowing hands helps get the job done. My gripe is that after 10 hours of braiding, my head hurts, my scalp hurts, and my fingers are so prune-y you would think that I performed my new hairstyle entirely under water.

3. The Sacred Relationship Between a Black Man and His Barber

As GIPHY's Jasmyn Lawson explains to me simply, "The relationship [a] black [man] has with his barber is quite sacred." Shape-ups, fades, and cuts are undoubtedly an art form that makes the barber shop a sanctuary in the community. Once you've established the connection? Only blood is a stronger bond.

4. When You Wake Up Without Protection...Again

Real talk: How is it that we are making a car that can drive itself, but there is yet to be a head scarf that doesn't come off in the middle of the night? If you're like me, you've come to a point of mistrust with all head scarves and purchased some satin pillowcases for the inevitable times your wrap comes off.

5. When You Face the Big Chop

Dramatic hair chops are often seen in cliche Lifetime movies, right before the white teen loses her shit or the white woman dumps her loser boyfriend. In black culture, it's about new beginnings that often can only be started by cutting of irreversible hair damage. Whether you're transitioning or just wanting something new, there is no denying that it can be an emotional, often empowering experience. Most of my hair habits and decisions are driven by the fact that I never, ever, want to do the big chop again, keeping myself hair-obsessed and donning low-manipulation hairstyles exclusively.

6. When You Master the Art of Bearding

A good beard deserves its own beard appreciation day — and not just because it's aesthetically pleasing, but for the beard maintenance unique to our black brothers. As many kinky-haired folks know, those tight curls of facial hair are too often bigger than the pore and can cause unsightly irritation. Weekly hair maintenance isn't exclusive to black women: DIY shape-ups take serious patience and skill.

7. When You Need to Pick Your Afro

If you're a naturalista that loves to wash and go, we know you've got a comb on you when we need one. As the great, Erykah Badu explains in her song, "If you don't pick your afro, you're going to have one side high." #Facts

8. When Those Baby Hairs Need to Be Tamed

Two toothbrushes are ideal: One to keep the pearly whites happy and the other to keep those edges tamed. The baby hair is fine and soft and smoothing it down in an up-do with a toothbrush is an age-old trick. The first person to smooth their baby hairs with a toothbrush should have their own national holiday.

Black hair shown in a way that's truthful for the hair beholders shouldn't be exclusive to GIPHY, or just during Black History Month. The more we talk about it, the more we express the how and why of our hair allows to make the existing negative bias apart of history and not our currently reality.