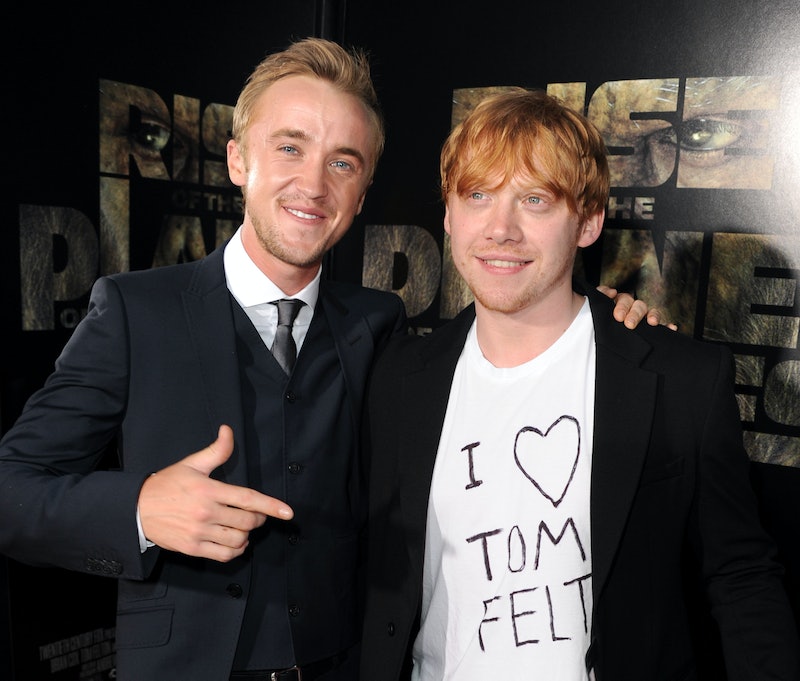 Who said Gryffindors and Slytherins can't get along? To celebrate the newest addition to Universal's Wizarding World of Harry Potter on Tuesday, June 11, Rupert Grint and Tom Felton had a Harry Potter cast reunion at the Orlando theme park, proving that Ronald Weasley (Grint) and Draco Malfoy (Felton) really can find common ground. And the social media posts from their day together will make you deeply jealous that you never got your Hogwarts letter.

Grint and Felton joined their fellow Hogwarts alums Evanna Lynch, who starred as Luna Lovegood, Grint's onscreen twin brothers James and Oliver Phelps — Fred and George Weasley, respectively — and Warwick Davis, who played Charms professor Filius Flitwick, at a preview event. They were there to celebrate the park's newest roller coaster addition, Hagrid's Magical Creatures Motorbike Adventure. According to E! News, the group even performed the levitation spell — "Wingardium Leviosa" — during their appearance onstage, to prove to fans that Hogwarts truly never leaves you. "So fun to reunite with my ‘students’ from #Hogwarts at @universalorlando for the opening of ‘Hagrid’s Magical Creatures Motorbike Adventure’. They are all quite ‘charming’!" Davis captioned a sweet mini Harry Potter reunion selfie from the event that he shared on Instagram.

In addition to their appearance at the Wizarding World of Harry Potter, Felton and Grint also hit up Universal Studio's Island of Adventures, where they visited the Jurassic Park River Adventure. Felton even shared a video of him and his costar meeting Blue, the velociraptor that Chris Pratt's character trains in Jurassic World. (Unfortunately for Felton, it seemed as if Blue was more of a Weasley fan than a Malfoy supporter, as she lunged at the actor when he approached the giant animatronic dinosaur.)

While his character didn't particularly get along with the Gryffindors and Ravenclaws onscreen, Felton has often spoken about how he still remains close friends with all of his Harry Potter costars. “It’s all a lie, we hate each other," Felton joked to People back in November 2018. "No, everyone is really sweet. I was lucky enough the last few months to see Daniel [Radcliffe] on Broadway, he’s doing well. He is always inspiring with his work choices and his outlook on life. I saw Emma [Watson] recently and had a little day on the beach."

Watson shared a video from that day on the beach, where she revealed that Felton had been attempting to teach her how to skateboard since their days on the Potter set, joking in her caption that he's been "#TFToleratingmysubparskatingskillssince1999." "Easy with the wobbling!" Felton tells her in the clip, which showed the pair riding around the boardwalk on the same skateboard, "Keep your feet still!"

The Harry Potter cast continues to support each other in all of their new endeavors, whether that means surprising their costars after a performance on Broadway or wishing Lynch good luck on Dancing with the Stars. And while everyone's days at Hogwarts are over and done, at least fans can take comfort in the fact that the franchise's cast will always remain an important part of each others' lives. As long as they keep sharing those mini-reunions on social media, it should help heal the loss all Potter fans have felt since the final movie premiered back in 2011.