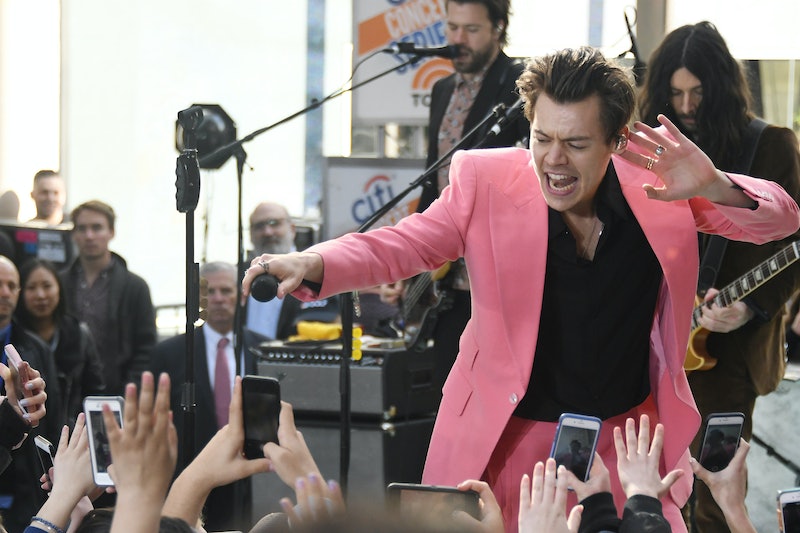 While Harry Styles signed a solo contract with Columbia Records only in June 2016, rumors that he would be creating music without the rest of One Direction have been around for almost as long as the band has existed. So to say the release of Styles' solo album has been highly-anticipated is just a tiny bit of an understatement. But the day where you can listen to a full album of songs by Styles is here and excitement levels are off the charts if memes about Harry Styles on Twitter are any indication. And specifically, the jokes about Styles' "Only Angel" — the sixth song on the album — show that the internet can't get enough of the tonal shift in the song.

Fans already had some idea of what to expect from Styles' self-titled album since he had previously released the songs "Sign of the Times," "Ever Since New York," and "Carolina" before Harry Styles came out on May 12. But that doesn't mean the internet was prepared for a 10-track album from Styles — or him tricking listeners like he does on "Only Angel." If for some unfathomable reason you haven't consumed Harry Styles in all of its glory multiple times yet, these "Only Angel" memes from Twitter might make you think the song's change in pace is far more dramatic than it is. However, the angelic choir singing in the beginning to Styles channeling Mick Jagger for the rest of the song impacted the internet pretty hard.

Is this how people felt when they first heard The Rolling Stones' "You Can't Always Get What You Want" with the choir then morphing into a rock song? Well, if Twitter existed back in the '60s, I expect the reactions would have been fairly similar to what's happening with Styles' "Only Angel." And if you were blown away by the song change and are looking for hilarious camaraderie, then check out these "Only Angel" memes and jokes from Twitter.