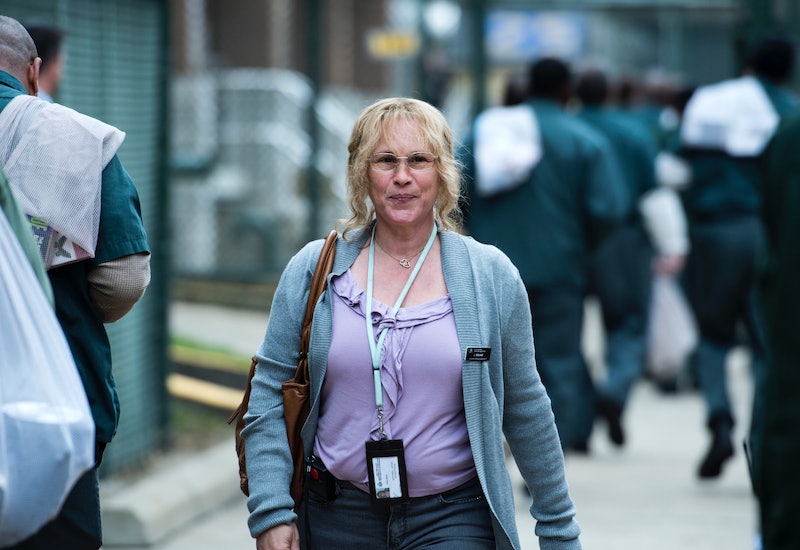 The prison breakout at the heart of Escape at Dannemora may be what originally drew people to the Showtime miniseries, but Patricia Arquette's performance is definitely helping to keep viewers hooked. She portrays the prison employee who was convicted for assisting in the escape. And even though Arquette hasn't meet the real-life person she's playing, updates on Joyce Mitchell in 2018 show she knows where to find her.

In Escape at Dannemora, Arquette's character, Tilly, is portrayed as a willing accomplice to inmates Richard Matt and David Sweat, who escaped from the Clinton Correctional Facility in 2015, as reported by NBC. Although Tilly is married to a fellow prison employee, Lyle, in the show, she's had affairs with Matt and Sweat through her job in the tailor shop and wants to run away with them. But as the premiere episode of Escape at Dannemora revealed, she gets arrested for her involvement in their eventual breakout. In real life, Mitchell plead guilty to promoting prison contraband and criminal facilitation as part of a plea deal in July 2015 after the hunt for Matt and Sweat was over, CNN reported.

Before her sentencing, Mitchell did an interview with The Today Show in which she said she cooperated with Matt and Sweat because she was scared for her family. "I just got in over my head and I couldn't get out," she said through tears. Yet, CNN reported that during her sentencing, the judge was not convinced by Mitchell's version of events. On Sept. 28, 2015, Mitchell was sentenced to up to seven years in prison for first-degree promoting prison contraband and a one-year concurrent sentence for fourth-degree criminal facilitation.

Mitchell was also fined $6,375, with the judge noting that the hunt for the escaped prisoners cost New York state $23 million in overtime pay. "If I could take it all back I would," Mitchell told the judge, per ABC News. "I can't begin to explain how sorry I am for all this."

According to NBC affiliate NBC5 WPTZ Burlington, she was moved to the maximum security prison, Bedford Hills Correctional Facility for Women, in Westchester County, New York, the day after her sentencing. Less than two years later in February 2017, the parole board unanimously denied Mitchell an early release. NBC reported that the board called her release "incompatible with the welfare of society." The board also wrote, "You present yourself more as a victim than a responsible participant and appear to be emotionally unstable and easily manipulated."

Her next parole hearing in 2017 was pushed back and in response, Lyle gave an exclusive interview to the DailyMail.com. "I just want her home where she belongs," Lyle told DailyMail.com. "I just want for us to be left alone." Lyle expressed anger that former corrections officer Gene Palmer, who was also convicted for his role in the escape, was already released. He further noted that he wanted no involvement in the Showtime adaptation. "They wanted to film here," Lyle said of his home with Mitchell. "I said no."

Mitchell did get her second parole hearing in September 2017, but she was denied again. Her attorney Peter Dumas told NBC5 that Mitchell is "a model prisoner" and expressed his disappointment in the decision. Mitchell's son Tobey told the Plattsburgh paper The Press-Republican that both he and his father were "very heartbroken."

Through the New York State Department of Corrections and Community Supervision's Inmate Population Information Search, Mitchell's current prison status is available. The 54-year-old Mitchell's next parole hearing is set for June 2019 and she could be released then. If the parole board denies her again, then her conditional release date (decided by a committee of prison staff based on the inmate's good behavior) is set for February 8, 2020.

Ahead of the premiere of Escape at Dannemora, Arquette told Today that she chose not to meet with the real-life Mitchell. But that hasn't stopped Arquette's performance as Tilly from being praised. And while the Ben Stiller-directed adaptation is set to wrap up on Dec. 30, Mitchell will remain in prison.