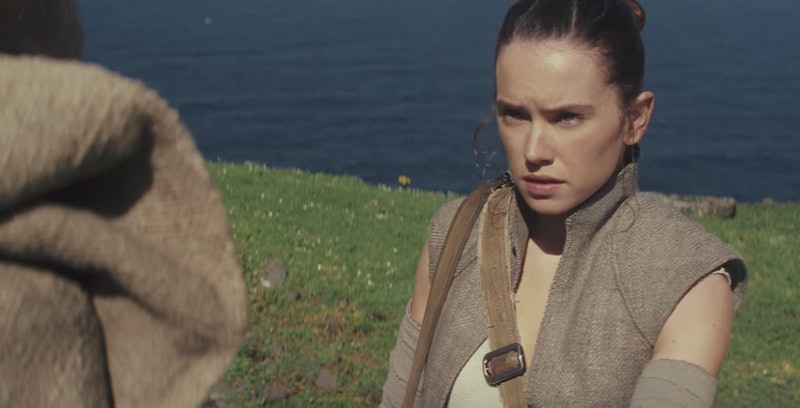 Spoilers ahead for Star Wars: The Last Jedi. One of the greatest questions raised during 2015's The Force Awakens still remains now even after The Last Jedi. That question is, of course, "who are Rey's parents," and while it's still uncertain, these Last Jedi clues that Rey is Luke's daughter make a pretty compelling case for that theory. Immediately after being introduced to Rey, Star Wars fans began speculating that she might be Luke's daughter, given her story's similarities to both Anakin and Luke’s childhoods on Tatooine. Not only does Rey's mysterious childhood mirror Luke's, though, but she also naturally has many of the Jedi master's skills, including her deep connection to the Force.

Because of Luke's heightened presence in The Last Jedi following his brief appearance at the end of the Force Awakens, fans assumed that the truth of Luke and Rey's familial relationship would come out in The Last Jedi, but instead the mystery of Rey's parentage largely remains. The latest Star Wars movie still offers new clues that Rey is Luke's daughter, which are mostly made apparent through Rey's improved Jedi skills.

When Rey meets Luke on the remote island of Ahch-To, she pesters him into teaching her how to become a Jedi master. Luke immediately observes that Rey has a powerful connection to the Force, which he says he's only seen before in Kylo Ren.

The comparison between Kylo and Rey might make you think that the two are siblings, but it's almost certain that Han and Leia aren't Rey's parents. If they can't be siblings, they can still be cousins, though, and it would make sense that the two people with the strongest connections to the Force both come from the Skywalker lineage. Plus, the original Star Wars trilogy covered the whole siblings thing pretty thoroughly, so it would make sense that the new Star Wars would focus on a different type of relatives.

The most striking clues that Rey is Luke's daughter is the way that The Last Jedi sets her up as his successor. The movie ends with Luke battling against the First Order, which he does using a dopplegänger that he conjured up with the Force. Through the entire epic battle, the real Luke is sitting in a meditative, hovering position in the same island where he has been for decades, using his mind to save the Resistance. While Luke doesn't die at the hands of Kylo Ren, he dies after the battle because he has depleted himself of all of his energy. He falls to the ground and then disappears, but not before he tells Ren, "I will not be the last Jedi." Right in that moment, Rey uses the Force to lift up the rocks covering the Resistance's bunker, and together, Rey and Luke save Leia's army.

Another clue that Rey is Luke's daughter occurs right after his death, as both Leia and Rey look up in the sky as they realize that Luke has died. Leia and Luke's strong sibling bond has always been one of the closest, most emotional relationships in Star Wars, so it's no surprise that she feels the energy shift when Luke disappears. The fact that Rey also feels it could suggest that she has a closer bond with Luke than she's previously known. It's possible that even Luke doesn't know about his relationship with Rey, which would actually be more believable than him knowing and not saying a word.

While on the island, Luke asks Rey who she is multiple times, which implies that he doesn't know her or even suspect that she is his daughter. Rey herself doesn't know who she is, but The Last Jedi confirms that she's special and that she might have important parents. At an intense moment of the film, Yoda appears on the island to burn down Luke's tree that holds the ancient Jedi texts. Yoda tells Luke to pass down what he knows to Rey, even if it's not straight from the books. Everyone who knows Star Wars knows that Yoda probably has all the answers, and he implies that Rey is Luke's daughter when he says that she is the next in line.

While the movie includes a lot of hints that Luke is Rey's father, it's still not completely determined. The theories that Rey is Obi Wan Kenobi's granddaughter or perhaps Rogue One's Jyn Erso's daughter could still prove to be true. The Last Jedi makes a solid case for believing that Rey is Luke's daughter — so go ahead and call her Rey Skywalker if it makes you happy.