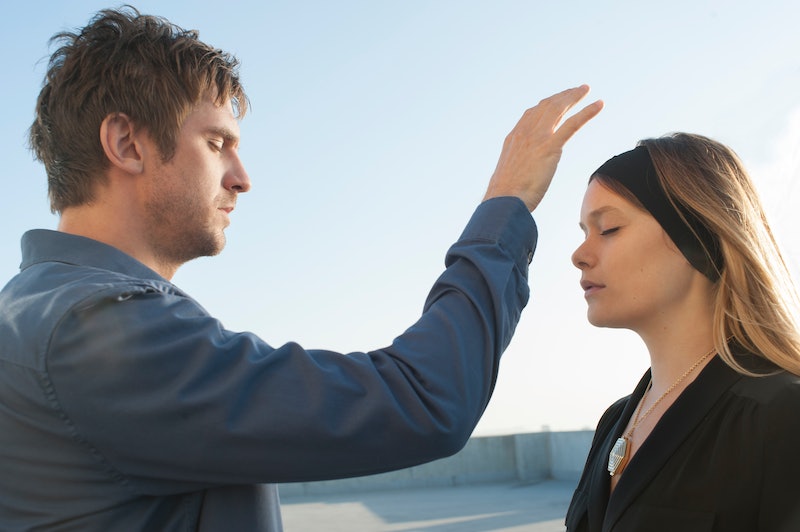 Suzanne Tenner/FX
By Jefferson Grubbs
May 8, 2018

FX's X-Men-adjacent series is one that practically invites rampant speculation, with each new episode sure to unleash floods of fevered conjecture about what's going on, which characters are real, who's in whose head, and what's going to happen next. Some of these Legion Season 2 theories are more outlandish than others… but on a show where minotaurs prowl mental mazes and enemies clash wits via dance battles, is there really any such thing as too outlandish? In fact, if anything, I'm worried that these fan theories aren't outlandish enough.

There are plenty of minor mysteries within the world of Legion for viewers to puzzle over, like what's up with the giant green floating fingers in the sky, or why that cow suddenly appeared in the halls of Division III one day. But frankly I'm too busy trying to figure out the big picture stuff to worry about stray bovines. (If the show gets around to explaining cow, fine. If it remains an unexplained detail, also fine.)

But which characters might be forging secret alliances? Which ones might be lying about their ultimate plans? And which ones might be hiding major twists pulled directly from the pages of Marvel comics? Some Sherlockian Redditors may have cracked the answers to those tantalizing questions.

1. Syd Is Working For The Shadow King

There's plenty of reason to be skeptical of Sydney Barrett, despite her protestations of love for David Haller. It's possible that Syd's been working with the Shadow King this entire time because, as Redditor Cautious_Confusion points out, she would have been alone with him for quite some time while inhabiting David's body way back in the Season 1 premiere. (They switched bodies after he kissed her, but viewers only ever saw the ensuing events from David's perspective.) Could they have hatched some sort of plan together during that interval?

Syd's actions in Season 2 have grown increasingly suspicious. First, a vision of her from the future appeared and convinced David to help the Shadow King find his body; a vision which David quickly and inexplicably accepted as genuine. Then, present-day Syd accepted this story about her future self just as quickly and inexplicably. Then Syd trapped David in her mind, tricking him into thinking that he was rescuing her from the Maze before revealing that she was actually putting him through a Sisyphean trial, the goal of which was to rewire him to her way of thinking — brainwashing him into accepting that war and violence, not love, are the only way forward.

Season 2 has been framed as a race between the Shadow King and Division III to find Amahl Farouk's body… but is it really his own corpse the Shadow King is looking for? Earlier in the season he convinced David to distract his team so Oliver could sneak into Division III — to steal a body-transforming gun, as viewers learned in "Chapter 12." But would he really have gone to so much trouble just to secure a tool to give Lenny what she wanted? She's not that important to him, surely.

But what if the Shadow King only used the tech on Amy Haller to make sure it worked… before using it to create himself a new body. If he could get a bit of his DNA into the gun, he wouldn't have to go to the trouble of finding his own corpse — he could just create himself a new corporeal form. And if that form came from a powerful mutant like David, all the better. As Redditor Gems4eyes pointed out, Farouk's attack on Amy killed two birds with one stone: it proved the device worked and it made David angry enough to provoke him into a confrontation during which the Shadow King can zap his nemesis and take over his form.

3. Oliver Is Gaslighting The Shadow King

There's been a lot of talk about delusions in Season 2… but who exactly is deluding who? Some fans theorize that Oliver is taking the opportunity of sharing consciousness with Amahl Farouk to wreak havoc with the Shadow King's mind. Redditor YannFromFrance laid out a detailed theory explaining how the ways Oliver is interacting with Farouk mirror the narrated interstitials about madness, including the hint Oliver gave Farouk regarding the Shadow King's weakness: that one plus one does not always equal two.

Planting such seeds of doubt within Farouk's thoughts may slowly distort his perception of the world. And if Farouk is a powerful enough mutant to turn his thoughts into reality, then those seeds might end up bearing tangible fruit. Maybe the Shadow King doesn't have a weakness yet… but by planting the idea that he has one, Oliver will make Farouk unintentionally manifest a weakness he can ultimately exploit.

Some comic book fans are starting to wonder if the Division III leader is actually an established Marvel character in disguise. Redditor PatternRec posits that Admiral Fukuyama is actually Simon Trask, the brother of Bolivar Trask, whom moviegoers may know as the character played by Peter Dinklage in 2014's X-Men: Days Of Future Past.

Like his sibling, Simon Trask is a staunch anti-mutant advocate who becomes infected with a techno-organic virus that grants him the power to transform people with a single touch into mindless human-machine hybrids that do his bidding — essentially semi-biological versions of the mutant-hunting Sentinels his brother created. Although Legion's mutant heroes have allied themselves with Division III out of necessity thanks to the threat posed by the Shadow King, it's important to remember that Division III started as the show's villains, hunting down mutants in Season 1. In that light, it's easy to see how Fukuyama — the leader of an anti-mutant organization who had some sort of "chip" implanted in his head, allowing him to control a horde of mindless automatons — could be the show's version of Simon Trask.

Yes, obviously Jon Hamm is transcendent. But no, I'm not talking about the word "sublime"… I'm talking about the character "Sublime." In the X-Men comics, John Sublime is a sentient bacteria that takes over human hosts and controls their minds. Some Redditors, like peytonblitz, find it likely that, not only will Sublime eventually show up on Legion… but that viewers have already met him (or heard his voice, at least), and that Jon Hamm is playing Sublime, and all of his narrated segments have been literal villain monologues.

You have to admit, Sublime's dapper human form even looks a bit like the handsome Hamm. And Legion's ultimate antagonist turning out to be an actual infectious disease? It almost seems too perfect not to be true. Heck, Farouk may have even name-checked Sublime in a recent episode, as Redditor teepeey pointed out.

6. The Theory To End All Theories

At the end of the day, I think Redditor Viasd has the best theory about Legion, bringing together all of the show's disparate parts — like minotaurs, cows, and hexagons — into one unifying whole: "Is it possible that maybe, just maybe, someone thought they would look cool?"

I think they really hit the nail on the head with this one.