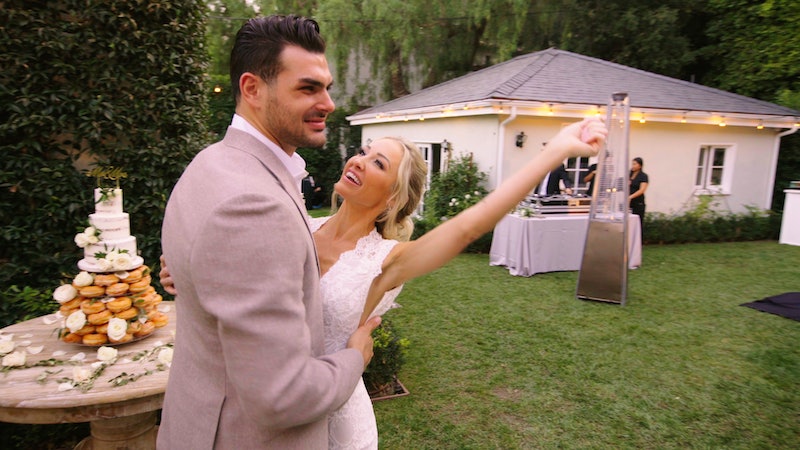 After the will they, won't they of Season 1, Selling Sunset Season 2 confirms that Mary Fitzgerald and Romain Bonnet did in fact tie the knot in an intimate, dreamy French estate wedding. The couple got married on Oct. 12, and though the COVID-19 shutdowns have made for an unusual honeymoon phase, the pair has been enjoying their time at home together.

In Season 1, it wasn't always clear if Mary and Romain were actually going to walk down the aisle. Romain seemed to hint that he felt like he was missing out (presumably compared to his partying, 20-something peers) and admitted that he didn't want kids for another five to 10 years. The two worked through the issues and got engaged, but still ended Season 1 in a minor squabble, with Romain resistant to helping Mary plan the wedding. (Romain's insistence that wedding planning is "a girl's thing" was toxic machismo rearing its head, let's call it like it is!)

Despite the early bumps in the road, the two persevered and got married in what Mary described to People as a "dream wedding" that "felt sincere and comfortable." The pair exchanged vows at a private estate that was one of Mary's listings, and fittingly, the most senior Oppenheim agent managed to even sell the home on her own wedding day.

"Everyone thought I was out of my mind, but I told the seller when he allowed me to book it for the wedding venue that I won't let the wedding planning or doing it there get in the way of selling it," Mary explained to People.

Mary also told People that the pair had planned to leave for their honeymoon in Bali in early March, but those plans obviously got canceled in light on the ongoing pandemic. Still, the couple hasn't let the change in plans get them down. They enjoyed a double date with Heather and her new boyfriend Tarek in late December, and Romain accompanied Mary to one of her open house events in February. They celebrated their one year anniversary together on March 11, with Mary writing that Romain was "patient, generous, and the most loving partner I could ever dream of."

They also took their canceled international trip in good humor. "With my love, enjoying this rare time at home together," Mary captioned a silly and casual selfie of the two on March 22. "It's not Bali where we were suppose to be right now, but making the most of it and enjoying the slower pace while we can."

The pair still seem to be pretty cooped up at home, but Mary explained to People that they've been brainstorming how to tackle real estate as a team. "We're going to start looking for a house to start flipping," she said. It may be a while before we see a third season of Selling Sunset, but it sounds like Mary and Romain are already shaping up to be quite the power couple.