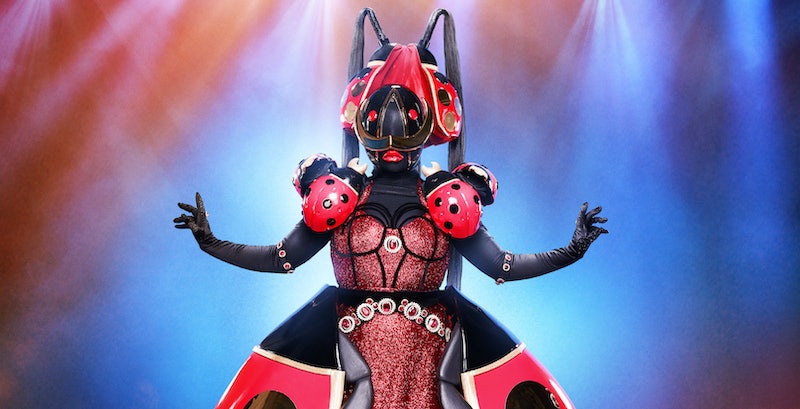 Because the costume wasn't revealed until Sunday night's Emmys, a mere few days before The Masked Singer's return, there weren't a lot of theories about Ladybug heading into Season 2. Sure, fans were able to make some preliminary guesses, but without any evidence, they were basically just shots in the dark (for example, suggesting Lady Gaga merely because they both have "lady" in their name). After Wednesday night's premiere, however, there's a lot more information to work off of, and viewers are already narrowing in on which celeb could be behind the mask.

During the episode, Ladybug's clue package was presented in the form of an old-fashioned television game show on the fictional network KSOR TV called "Spin Your Wheel." This setup, she said, represented her "lifetime of drama." The spinner landed on these potential clues: a ham, a bridge, a baseball bat, and a dog carrying letters. Ladybug says that she was born in the limelight and that the media covered "every piece of gossip and family feud."

The only other bit of information that the Ladybug revealed is that she has a Southern accent and feels "lucky" to be there — hence the choice of costume. Based on all that, here's who fans (and panelists) think she is:

Nicole Scherzinger guessed that Ladybug might be Jamie Lynn Spears. As an actress and Britney Spears' sister, she certainly grew up in the spotlight. She's also a singer, but hasn't performed in a long time — which might explain why the Ladybug seemed so nervous before beginning. The former Zoey 101 star is a popular theory on Twitter as well, and by the end of the episode Jenny McCarthy agreed with Scherzinger.

Another big Ladybug theory on social media is Kelly Osbourne. That would mean that she's trying to disguise her natural British accent, but it's possible. Some of the memorable moments from The Osbournes may have been referenced in the Ladybug's clue package: the family hired a dog therapist, and Sharon infamously tossed a ham over a fence.

Before coming around to Spears, McCarthy first suggested that Ladybug could be Will and Jada Pinkett Smith's daughter Willow. That fits the clue about growing up famous, and Willow is an established musician. However, the tone of Ladybug's voice doesn't sound a lot like Willow, so this one may be off base.

Phil Collins' daughter Lily was Robin Thicke's first guess — and it's a smart one! Like Osbourne, she'd have to be putting on a Southern accent to fool the Masked Singer panel and audience, but Collins was born into fame. While she is known primarily as an actor, she has also done some singing in films like Rules Don't Apply and Mirror Mirror. The bridges in the clue package could represent a link between two different countries, and Collins is British-American.

Now that we finally have some clues, we're a few steps closer to figuring out who Ladybug is. If one of these theories isn't already correct, trust that someone will figure it out before she's finally unmasked.